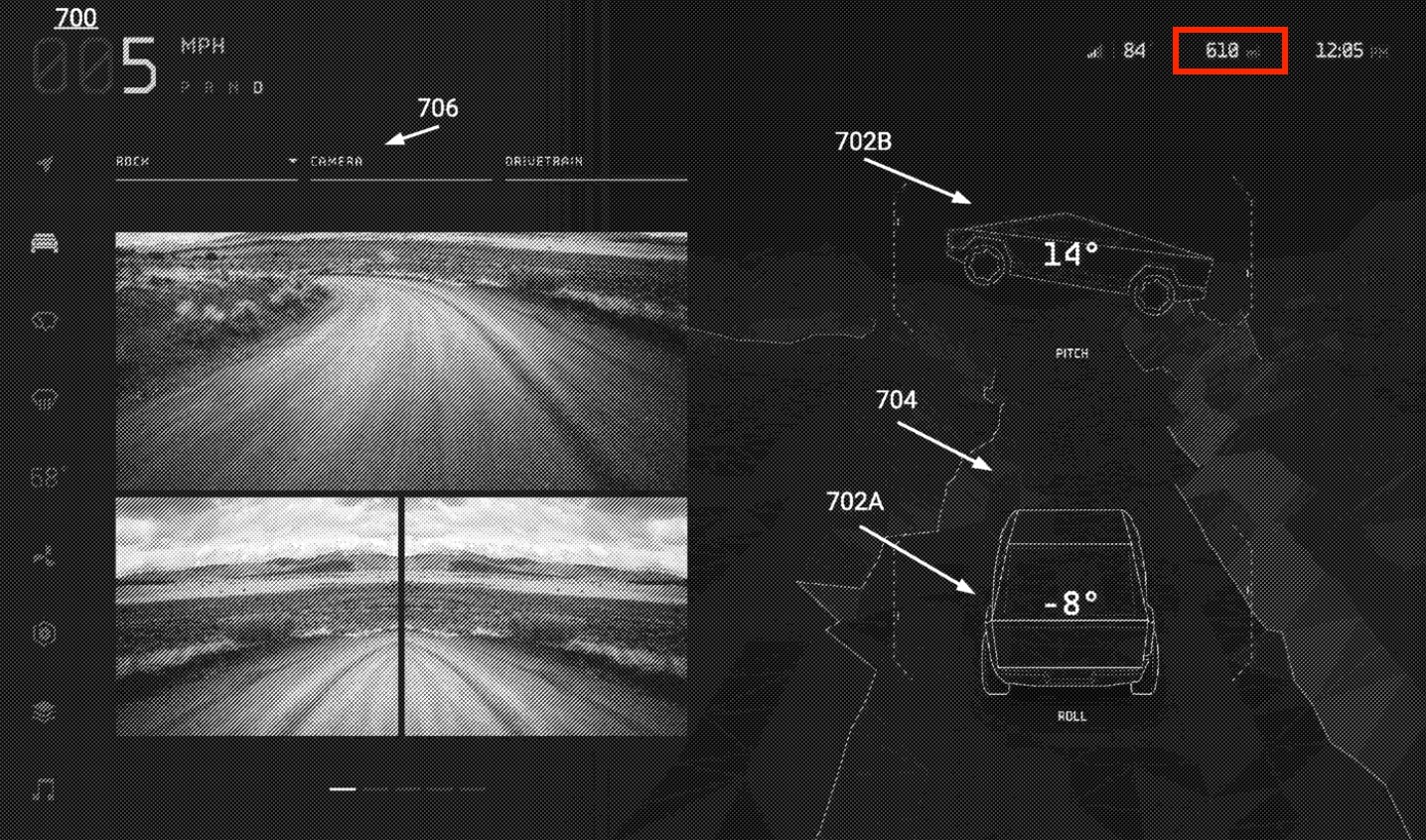 During its unveiling, the Tesla Cybertruck’s tri-motor configuration was announced with some very impressive specs, including a 0-60 mph time of 2.9 seconds, a towing capacity of 14,000 pounds, and a top speed of 130 mph. But beyond this, the tri-motor Cybertruck was also announced with 500+ miles of EPA estimated range.

A 500+-mile range is extremely impressive considering the Cybertruck’s massive size and likely weight. With Elon Musk stating that vehicles like the Tesla Semi would be released with a range that’s closer to 600 miles per charge, speculations were abounding that the tri-motor Cybertruck may have a range that’s in the same ballpark as the Class 8 truck.

A recently-published patent on the Cybertruck’s user interface has now provided further hints that the all-electric pickup’s actual range may really be far above its initial “500+-mile” estimate. As could be seen in 21 out of the UI patent’s 33 drawings, the Cybertruck’s range was listed as 610 miles. This was quite interesting considering that the patent’s illustrations appeared to be screenshots from the Cybertruck’s upcoming UI.

It should be noted that patent illustrations are not a direct indication of the Cybertruck’s final specifications, and the 610-mile number may be a placeholder. Nevertheless, the possibility of a 610-mile tri-motor Cybertruck is exciting, as it would effectively establish Tesla’s battery lead in the electric pickup sector. Even formidable competitors like the Ford F-150 Lightning and the GMC Hummer EV—arguably the best electric pickups that legacy auto has unveiled to date—top out at 300 and 400 miles of range, respectively.

Tesla’s Cybertruck UI patent featured several other interesting references to the all-electric pickup’s novel features. These include the use of eye tracking technology to adjust the vehicle’s mirrors, as well as an air conditioning system that tracks passengers for optimum climate control. Several images from the patent also hint at the Cybertruck pulling a 20,000-pound trailer, as well as 20 inches of suspension travel.

The Tesla Cybertruck may be gracing US roads earlier than expected, with Gigafactory Texas accelerating its construction over the past months. Elon Musk has also mentioned that the first Cybertrucks may actually be completed later this year, with volume production of the steel pickup picking up pace next year.