WASHINGTON, DC – SEPTEMBER 16: In this handout frame grab from the Washington Navy Yard provided by the FBI on September 25, 2013, Aaron Alexis drives his rental car, a blue Toyota Prius, through the Washington Navy Yard main gate September 16, 2013 in Washington, DC. The FBI investigation indicates that the gunman, Aaron Alexis, acted under the delusion that he was being controlled by extremely low frequency (ELF) electromagnetic waves when he carried out his attack on the Navy Yard, in which 12 people were killed and 4 were wounded. 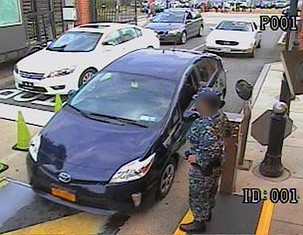