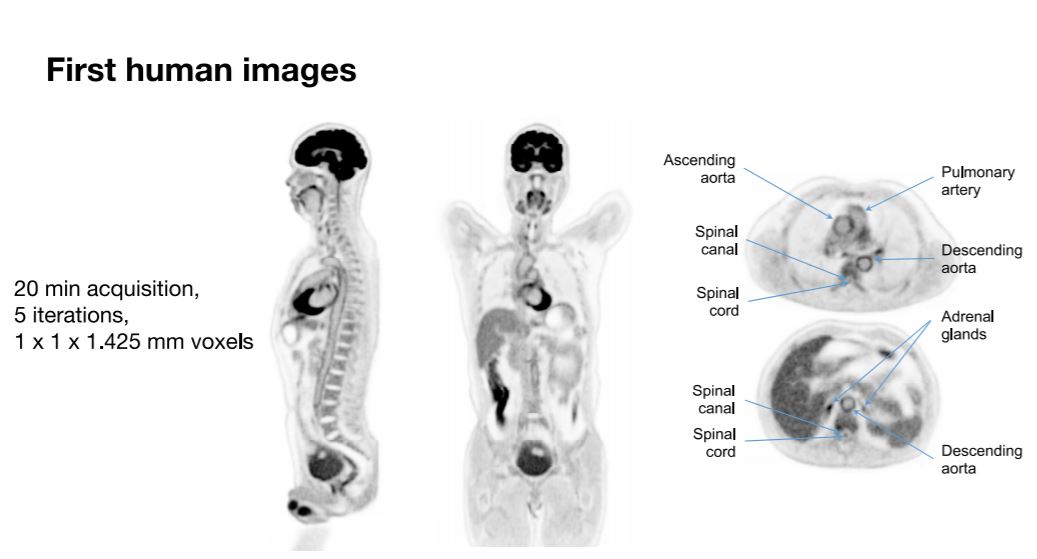 Scientists from the University of California Davis in partnership with Shanghai-based United Imaging Healthcare (UIH) have developed a scanner capable of producing 3D images of the entire human body at once. The first images were released on November 17, 2018 and, as promised, they provide a level of detail not available in any other device in the world. Named EXPLORER, the machine has been 13 years in the making and was funded by grants from the National Cancer Institute and the National Institutes of Health. The initial concept for EXPLORER was devised by UC Davis scientists Simon Cherry and Ramsey Badawi, and another 40+ scientists make up the team involved in its development from multiple universities.

Using a type of sectional imaging called PET (positron emission tomography), EXPLORER can produce a whole body scan in as little as 20 to 30 seconds, which is about 40 times faster than current scan capabilities. The machine is also unique in its overall sensitivity, specifically 40 times higher than existing commercial systems. This enhanced capability means much higher resolution images, significantly lower radiation dosage requirements, quicker scans, and the ability to track radiotracers for a longer period of time. The fast scanning ability could also avoid the need for anesthesia in young children.

PET is a safe medical imaging technique that either maps the location or tracks the movement of dye placed into the body containing miniscule amounts radioactive elements (“radiotracers”). Certain organs and tissue absorb the dye, providing information for doctors to analyze and assess their functionality. Specifically, a PET scan shows where the dye collects. Through this method, blood flow and oxygen activity can be measured, along with many other functions, and it is commonly used to detect cancer, heart problems, and issues with the central nervous system.

Given the improvements provided by EXPLORER, the team’s scientists and UIH, the company that built it, hope their machine will improve things in the clinical environment such as diagnosing and tracking diseases, providing detailed information about drug therapies, and obtaining better data on cancer that has metastasized. They are further working together to install the EXPLORER system in Sacramento and plan to begin imaging patients in June of 2019. The goal overall is to make EXPLORER available to the international clinical research community.

Watch the below video to see EXPLORER’s images display the progress of a radiotracer injected into a patient: