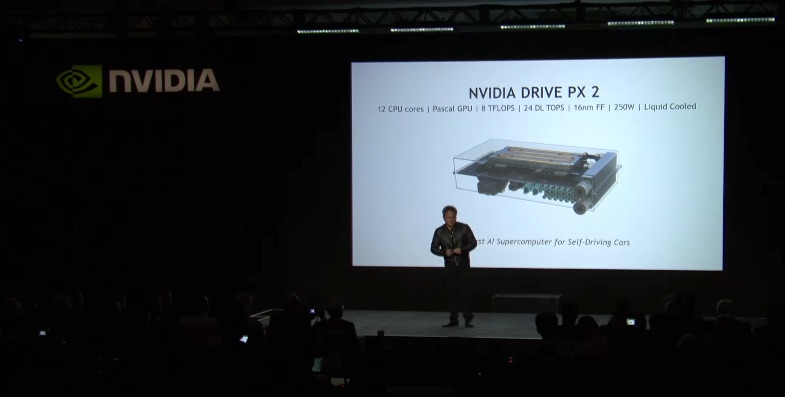 NVIDIA unveiled its Drive PX2 supercomputer at the 2016 Consumer Electronics Show in Las Vegas. It has the computing power of 150 MacBook Pros and is the size of a lunchbox. Self driving cars are going to need a lot of computing power and NVIDIA will be there to fill the need. On Tuesday, it unveiled its newest supercomputer dubbed the Drive PX2, at CES 2016 in Las Vegas. NVIDIA chief Jen-Hsun Huang wowed the crowd during his keynote address by reeling off the specifications for his company’s latest amazing product.

The Drive PX2 has the processing power of 150 MacBook Pros, he says. It is packaged into a space about the size of a lunchbox. The Verge reports it has 12 CPU cores that enable a combined eight teraflops and 24 deep learning tera operations per second. The Drive PX2 is liquid cooled to keep its internals from overheating.

What can it do? According to Huang, the Drive PX2 can “process the inputs of 12 video cameras, plus lidar, radar and ultrasonic sensors.” Huang believes a true self driving car will need to have enough processing power on board to handle all the input it gets from the many built in sensors without having to rely on the cloud for assistance.

At last year’s GPU Conference, Elon Musk said, “What NVIDIA is doing with Tegra is really interesting and really important for self-driving in the future.” He told the audience that autonomous driving at speeds up to 10 mph is quite easy. Driving on the highway is also fairly easy to do. It is in urban settings at speeds between 10 and 50 mph with traffic lights and pedestrians added into the mix where autonomous driving becomes really hard.

NVIDIA says its new computer is able to detect other cars even in snowy conditions and is can translate road signs in German “better than a human can.” Ford, Mercedes and BMW are using NVIDIA computers to power their autonomous driving systems. Volvo is the first car maker to say it will incorporate the Drive PX2 into its self driving cars.

Elon thinks the time will come when autonomous cars will be safer than cars with human drivers. He’s even gone as far as saying there may come a day when humans are banned from driving because they are too dangerous. When that day comes, NVIDIA autonomous driving supercomputers will be operating behind the scenes, whether in Teslas or other makes of cars, making it all possible. You can watch Jen-Hsun Huang’s presentation at CES in the video below.