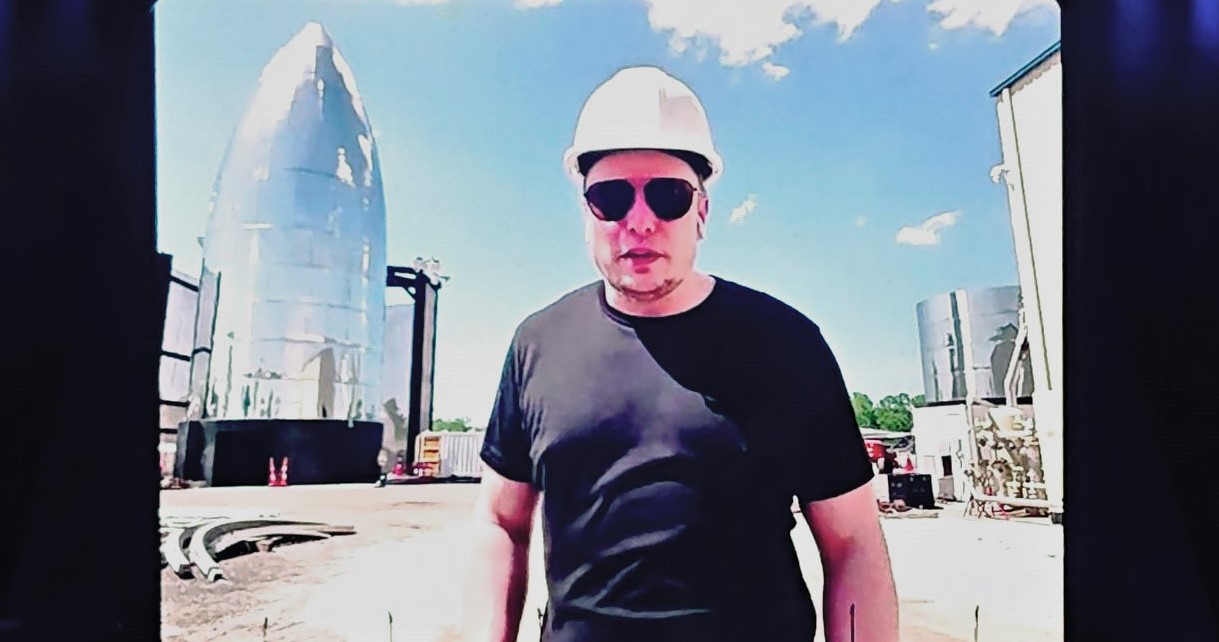 While on the East Coast for Falcon Heavy’s third launch, also described as SpaceX’s most difficult launch yet, CEO Elon Musk dropped by the company’s Florida Starship campus and recorded a small acceptance speech for his 2019 Stephen Hawking Medal.

On the very same day, at the very same site, a lone Raptor was effectively displayed for all to see to such an extent that unaffiliated photographers were able to capture impressively detailed photos. Almost the certainly the first time a full-scale Raptor has traveled east of Texas, the engine’s presence at SpaceX’s Florida Starship site is truly surprising in light of the fact that the East Coast campus is solely focused on building orbital-class prototypes. Why, then, is one of SpaceX’s small handful of completed Raptors in Florida?

About a month ago, Elon Musk was announced as the recipient of 2019’s Stephen Hawking Medal of Science Communication. Meant to be awarded in person at a ceremony in Switzerland, Musk was unable to attend the event due to a schedule conflict with Falcon Heavy’s third launch, but the infamously busy CEO managed to film a brief thank you message that was then broadcast in Switzerland.

In what seems to be a coincidence, Musk’s message – either recorded or streamed – was filmed on SpaceX’s Florida Starship development campus, a surprisingly large facility uncovered less than two months ago. The CEO was standing in the sun directly in front of two large segments of the second orbital-class Starship prototype, part of a parallel development process featuring a second Starship prototype (and separate Starhopper) in Texas. Musk’s appearance at Starship Florida is not particularly surprising; if he flew all the way to Florida for Falcon Heavy, might as well tour SpaceX’s newest Florida facilities on the same trip.

What is surprising, however, is the presence of what looks like a finished Raptor engine in Florida. Looks can certainly be deceiving but SpaceX’s Florida Starship prototype – while undeniably flying through preliminary assembly – does not appear to be anywhere near flight-readiness. In Boca Chica, a partially separate SpaceX team is working to prepare Starhopper – a partial-fidelity, suborbital prototype – for low-altitude, low-velocity hop tests

Back in May, a mystery Raptor engine – believed to be serial number 04 (SN04 – appeared in South Texas and was soon installed on Starhopper for fit-checks and tests of the engine’s thrust vectoring capabilities. SN04 was soon uninstalled and shipped elsewhere; perhaps to SpaceX’s rapidly-progressing Florida Starship. If the surprise Florida Raptor is, in fact, SN04, then it’s safe to assume that it will remain inert for the time being, serving as a fit-check article and opportunity for training and familiarizing technicians and build engineers. At the moment, Florida’s Starship lies in several large segments, including what appears to be the early stages of its first propellant tank bulkhead(s).

Nevertheless, as partially demonstrated above, SpaceX’s Florida team is wasting no time at all. By all appearances, they are rapidly catching up with Texas, at least as long as Boca Chica’s Starhopper work is excluded. Given the benefit of the doubt, SpaceX Texas would likely be at a similar stage of Starship develop after a similar amount of time (~2-3 months), but much of the Boca Chica workforce has been focused intently on building, upgrading, and testing Starhopper, essentially a flying testbed for Raptor and BFR development.

To an extent, Florida’s orbital Starship prototype looks even more refined than its relatively rugged Texas cousin. Given an additional 1-2 months of nonstop work and a rate of progress similar to the last two months, it’s not out of the question that the Florida prototype will begin to seriously resemble a finished Starship. By all realistic accounts, some of the most difficult work will be found inside and around Starship’s finished aeroshell, though, and the process of outfitting avionics, plumbing the propellant/propulsion sections, and implementing hydraulic/actuation systems will be a huge amount of work.

Even after Starship East is effectively complete, SpaceX will still face the seemingly immense challenge of transporting a massive spacecraft that weighs several dozen tons and measures 9m (30 ft) in diameter and 60m (200 ft) tall from Cocoa to Pad 39A, a full 20-30 miles of public roads and highways. In fact, the easiest method of transporting may involve getting Starship onto a barge in the nearby Indian River and towing it 100+ miles by water to the beach adjacent to Pad 39A. Regardless, neither method is going to be quick or easy and both will put on quite a show for local observers.