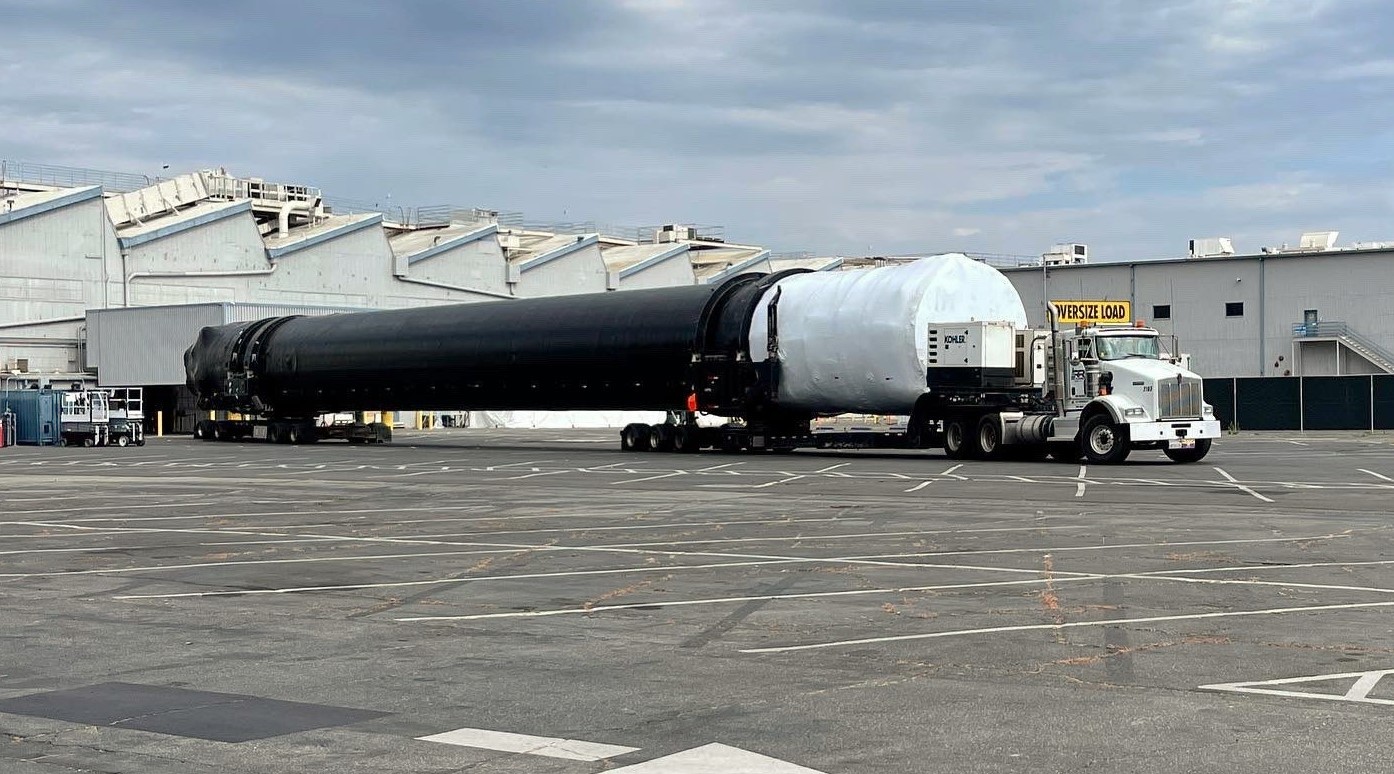 A mystery Falcon 9 booster was spotted at SpaceX's HQ on July 18th and again on its way to McGregor, Texas on the 21st. (Kolby Ratigan)

For at least the fourth time in 2021, SpaceX has shipped a new Falcon booster from its Hawthorne, California headquarters and factory to an expansive test and development campus in Central Texas.

By all appearances, SpaceX’s latest delivery could imply that the company is on track to experience its first Falcon booster production uptick in four years. Thanks almost exclusively to the overwhelming success of Falcon reusability, SpaceX has been decreasing booster production year over year since 2017 while (on the whole) still significantly increasing its annual launch cadence. However, that downward booster production trend may have finally come to an end in 2021.

On July 21st, spaceflight journalist Eric Berger spotted a SpaceX Falcon booster – almost impossible to miss on the road – traveling eastbound towards El Paso on a Texas highway. Designed from the start with a maximum diameter (3.6m/12′) explicitly limited to allow Falcon 9 and Falcon Heavy stages to be easily and cheaply transported by road, SpaceX has taken advantage of that capability by making Falcon rockets some of the most extensively tested launch vehicles on Earth.

Most notably, every single Falcon 9 and Falcon Heavy booster and upper stage SpaceX has ever built at its Hawthorne HQ has shipped to McGregor, Texas for qualification testing before being cleared to launch. The exact nature of that qualification testing is unknown but, at minimum, every SpaceX-built stage must eventually complete a clean static fire test before the company deems it qualified for flight and ships it to one of three launch pads.

Before integrated static fire testing, SpaceX also separately tests every single Merlin 1D, Merlin Vacuum, Draco engine, and cold gas thruster before they’re installed on their respective Falcon first stage, second stage, fairing, or Dragon spacecraft back in California. However, Falcon engines, fairings, second stages, and Dragon spacecraft are all small or well-packaged enough to be unassuming on the road. Only Falcon boosters – measuring some 4m (~13 ft) wide and 56m (~190 ft) long and usually wrapped in solid white or black plastic – are routinely spotted in the wild by members of the public.

Those regular public spottings provide the only real glimpse available behind the curtain of SpaceX’s prolific rocket production. Beyond a mishmash of observations from members of the public and the occasional tidbit from CEO Elon Musk, SpaceX – a private company in a very competitive industry – provides no official information about how many Falcon stages it produces each year. That leaves it up to unaffiliated fans to collate and track that activity.

In particular, one Reddit user went to the effort of combing through a decade of those observations to tabulate SpaceX’s annual Falcon first stage production – including Falcon 9 and Falcon Heavy boosters – since 2010. From 2010 to 2017, booster production consistently grew year over year, ultimately peaking at 13 – more than one booster per month – in 2017. Since 2017, booster production has consistently declined, dropping to just five boosters completed in 2020 – the lowest figure since 2013.

Of course, despite building just five new boosters in 2020, SpaceX completed a record 26 Falcon 9 launches, demonstrating just how much of a paradigm shift booster reusability has been for the company. Notably, while booster production has drastically decreased, SpaceX still has to manufacture a new expendable upper stage for every Falcon launch, meaning that – for the most part – Hawthorne is likely as busy as – and soon to be busier than – it was around the 2016-2018 peak.

In a bit of twist, though, that booster production downtick may have bottomed out in 2020. Since May 2020, SpaceX appears to have shipped at least 8 or 9 boosters* from Hawthorne to McGregor. Less than a month ago, a new booster – believed to be Falcon 9 B1069 – went vertical in McGregor ahead of its first wet dress rehearsal and static fire. Less than three weeks later, another new Falcon booster was spotted ready for transport outside of Hawthorne – likely the same booster spotted on its way to McGregor on July 21st.

In 2021, SpaceX has delivered one Falcon Heavy (likely B1066) and two Falcon 9 boosters (B1067 and B1069) to McGregor. The mystery booster seen in Hawthorne on July 18th – now likely inside a McGregor hangar as of publishing – is the fourth Falcon first stage to roll out of Hawthorne this year. If SpaceX maintains that average over the next five months, it could ship 6 or even 7 Falcon boosters in 2021 – marking the first apparent production uptick since 2017.