SpaceX has offered an extraordinary glimpse into a stealthy program of Falcon fairing recovery research and development, which has utilized drop tests and iterative hardware and software upgrades to inch ever closer to fairing reuse over the last 6-9 months.

Short of a small handful of sparse comments made by executives in 2018, this is the first time SpaceX has officially acknowledged its continued attempts to optimize Falcon fairing recovery in the face of a number of missed post-launch catches. Given that the pictured fairing was so close to a successful landing that its parafoil actually became caught in Mr. Steven’s net, it seems that SpaceX has nearly solved the problems that have thus far prevented program success.

In the last six months of 2018, SpaceX has continued to tease its slow progress towards reusable Falcon fairings, originally planned to depend on a truly bizarre solution – Mr. Steven. An impressive vessel on its own, SpaceX has gradually added and extended and upgraded a range of recovery hardware on his deck, most notably including a vast net (likely tens of thousands of square feet or 2000+ square meters) supported by four huge arms and eight supporting booms. Despite increasing the usable area of the net, SpaceX has been unable to secure an operational fairing catch since it began attempts in March 2018.

In late May 2018, SpaceX provided the best look yet at the actual process of recovering Falcon fairings, showing off the guided parafoil (a wing-like parachute) and revealing that a fairing half – launched in support of Iridium-6/GRACE-FO – had splashed down just 50 meters (~165 ft) away from Mr. Steven’s net.

Falcon 9 fairing halves deployed their parafoils and splashed down in the Pacific Ocean last week after the launch of Iridium-6/GRACE-FO. Closest half was ~50m from SpaceX’s recovery ship, Mr. Steven. https://t.co/JS7d5zTdIg pic.twitter.com/LjiTwnB4wd

However, in the months that followed, info about catch attempts became increasingly sparse and it eventually became clear that SpaceX was preparing to perform a range of controlled drop tests a few hundred miles off the coast of California. Ultimately, the company’s engineers and technicians hoped to use the controlled environment and a greater number of available drop/catch attempts to refine the hardware and software needed to finesse fairing halves into Mr. Steven’s net.

It may be almost absurdly large relative to any other conceivable thing that exists in the real world, but a few thousand square meters is actually more like a needle in a haystack for a piece of rocket traversing a 500-800 km arc at top speeds of more than 2 km/s. 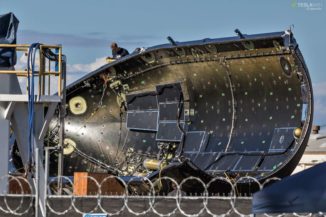 After an audible “3..2..1”, a sharp noise much like compressed gas being released was followed by a clang as the harness dropped. (Pauline Acalin)

SpaceX’s fairing recovery fleet technicians were seen performing a bit of an unexpected ride aboard a Falcon 9 fairing half on September 19th. (Pauline Acalin)

In December 2018, following another sadly unsuccessful fairing recovery attempt on the West Coast, SpaceX CEO Elon Musk revealed that engineers were also apparently looking into backup plans in case closing that last 50-meter gap turned out to be more expensive or complicated than it was worth. Most notably, he implied that SpaceX was interested in finding ways to waterproof and ultimately refly Falcon fairings even after soft-landings in seawater, whereas fairings are already capable of reliably landing intact in the ocean but cannot be reused due to seawater contamination and cracking caused by impact.

Falcon fairing halves missed the net, but touched down softly in the water. Mr Steven is picking them up. Plan is to dry them out & launch again. Nothing wrong with a little swim.

Given just how close Mr. Steven appears to be to a successful in-net fairing recovery, it now seems implausible that SpaceX will choose just one of the two options at hand, likely instead progressing both development programs to points of success. Once fairings can both be successfully waterproofed and caught in Mr. Steven’s net, SpaceX will almost certainly have itself a foolproof solution to easy and reliable recovery and reuse even in bad sea states and stormy weather.

With the company’s first launch of 2019 probably just a few days away, chances seem good that SpaceX will attempt at least one more post-launch fairing recovery with Mr. Steven. Fingers crossed!