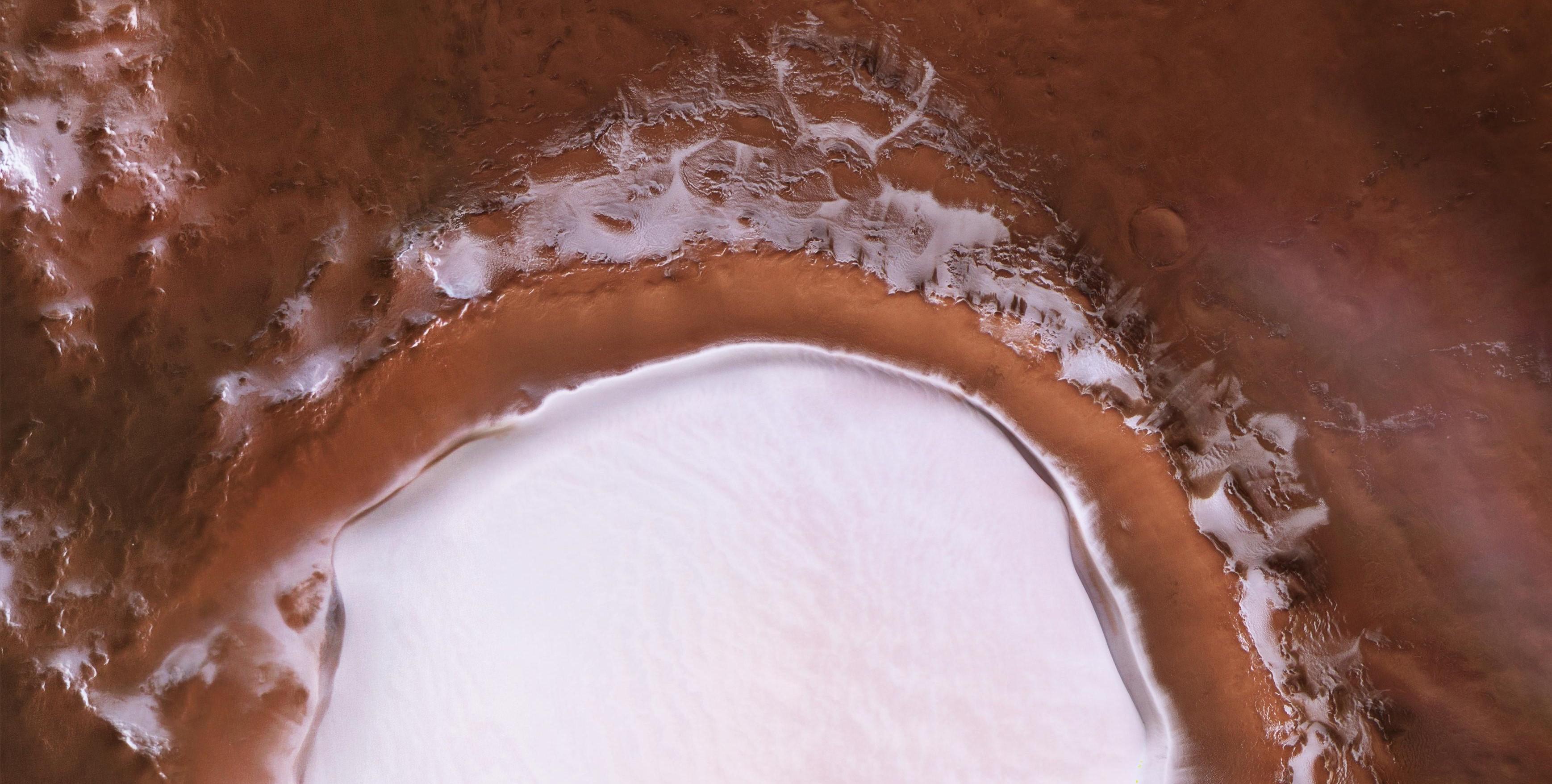 The European Space Agency’s red planet orbiter Mars Express has captured a festive photo of the snowy Korolev crater just in time for the holiday season on Earth. Located in the northern lowlands of Mars and boasting a width of about 50 miles and a little over a mile depth, the crater is well preserved and remains filled with ice year-round. If snapping a photo of a permanent winter isn’t holiday enough, it may also be fun to know that the satellite entered orbit around Mars for the first time on December 25, 2003.

The crater’s permanent frozen condition is due to a phenomenon known as “cold trap”, meaning when air moves across its surface, it cools and becomes heavy, getting “trapped” directly above the ice. This creates a cold air shield that maintains the frosty state. Liquid water is no longer found on Mars, but there is plenty of water ice throughout the planet, even in the regolith. The amount of water ice in the crater is comparable to the Great Bear Lake in northern Canada.

Sergei Korolev, the man who carries the crater’s namesake, was considered the father of Soviet space technology. Of all his notable accomplishments during his tenure in the Soviet space program, Americans may be most familiar with his work on the Sputnik program which produced the first artificial satellite to make orbit on October 4, 1957. That accomplishment marked an important “win” in the first round of the Cold War era space race. Korolev’s most famous quote was, “The simpler a design, the better. Anyone can build something complicated.” The simple, still existence of the frosted crater is a fitting tribute.

The Mars Express orbiter was launched on June 2, 2003 aboard a Soyuz/Fregat rocket. Its planned mission is to image the entire surface of Mars at high resolution, some selected areas at super resolution, along with producing maps of the planet’s mineral compositions and atmospheric activities. It also had a lander along with it called the Beagle 2, but unfortunately it became inoperable after successfully landing on the surface right after Mars Express arrived at the planet. The fate of the craft remained a mystery for 12 years until NASA’s Mars Reconnaissance Orbiter located it and provided photographs of the lander on the surface in 2015.