After being tracked from Florida to Texas, a local observer near SpaceX’s McGregor, TX facilities spotted Falcon Heavy’s second side booster vertical on one of the area’s static fire test stands.

Posted to Facebook’s SpaceX group by Keith Wallace, a photo clearly shows the core’s distinctive nose cone, which takes the place of the interstage and improves the aerodynamic profile of the side boosters. The booster now on the stand in Texas is believed to be Core 1025, previously flown during the CRS-9 mission. The core has been modified significantly for its new role as a Falcon Heavy booster, largely in the form of strengthening structures, as well as the addition of the iconic nose cone and a connection interface that will allow it to attach to the center core. 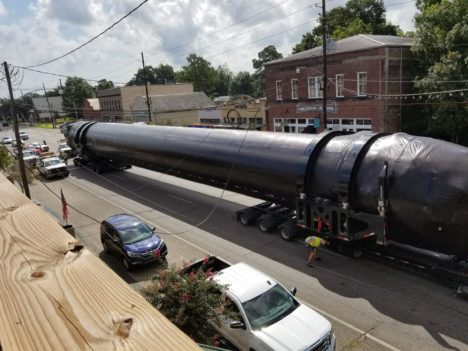 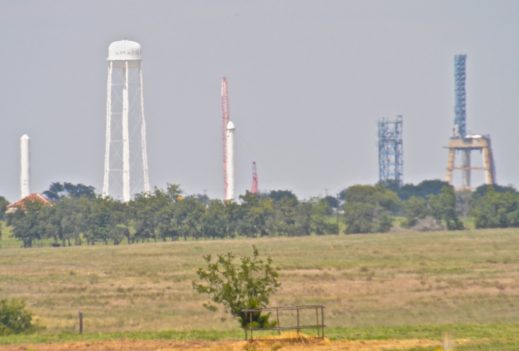 The other side booster, Core 1023, previously launched the Thaicom-8 geostationary communications satellite in 2016 and has since been refurbished, modified, and conducted two full duration static fires at the same facilities as 1025. The center core of Falcon Heavy was manufactured as a new vehicle in SpaceX’s Hawthorne, CA factory due to wide-ranging differences between its structure and the average Falcon 9 first stage.

Elon Musk made headlines when he put a significant damper on expectations for the Falcon Heavy’s inaugural launch, directly stating that he would deem the launch a success if it failed without destroying the launch pad. However, SpaceX President Gwynne Shotwell and Hans Koenigsmann, Vice President of Mission Assurance, both have made statements in the months since the conference indicating that SpaceX has considerably more confidence in the vehicle than Musk’s statements might suggest. Coincidentally, a day before side booster #2 was spotted in Texas, a member of the Facebook group toured Kennedy Space Center Visitor Complex and noticed a launch calendar that suggested an inaugural launch date of November 28, 2017 for Falcon Heavy. The Visitor Complex is not run by NASA, so this date ought to be taken with many, many grains of salt. Regardless, with the final side booster now actively undergoing static fire testing ahead of being shipped back to Florida, Falcon Heavy is closer than it has ever been to being truly ready for launch. Several other big tasks lie ahead of SpaceX in order to prepare for the inaugural launch, mainly involving the reactivation of the launch pad LC-40 and subsequent modifications to LC-39A. Time will tell if the 28th of November is to become a historic day for the company.

Meanwhile, SpaceX continues to tackle its launch manifest at a seemingly routine pace of one launch every 14 or so days. Ahead of a launch currently scheduled for next Thursday, September 7, SpaceX has conducted static fire of the Falcon 9 first stage, this time the company’s East Coast launch pad, LC-39A. If all goes well, SpaceX will have the honor of sending a reusable spaceplane into orbit aboard its partially reusable Falcon 9, making for a truly appropriate pairing of payload and launch vehicle.

Static fire test complete—targeting Falcon 9 launch of OTV-5 from Pad 39A at @NASAKennedy on Thursday, September 7.