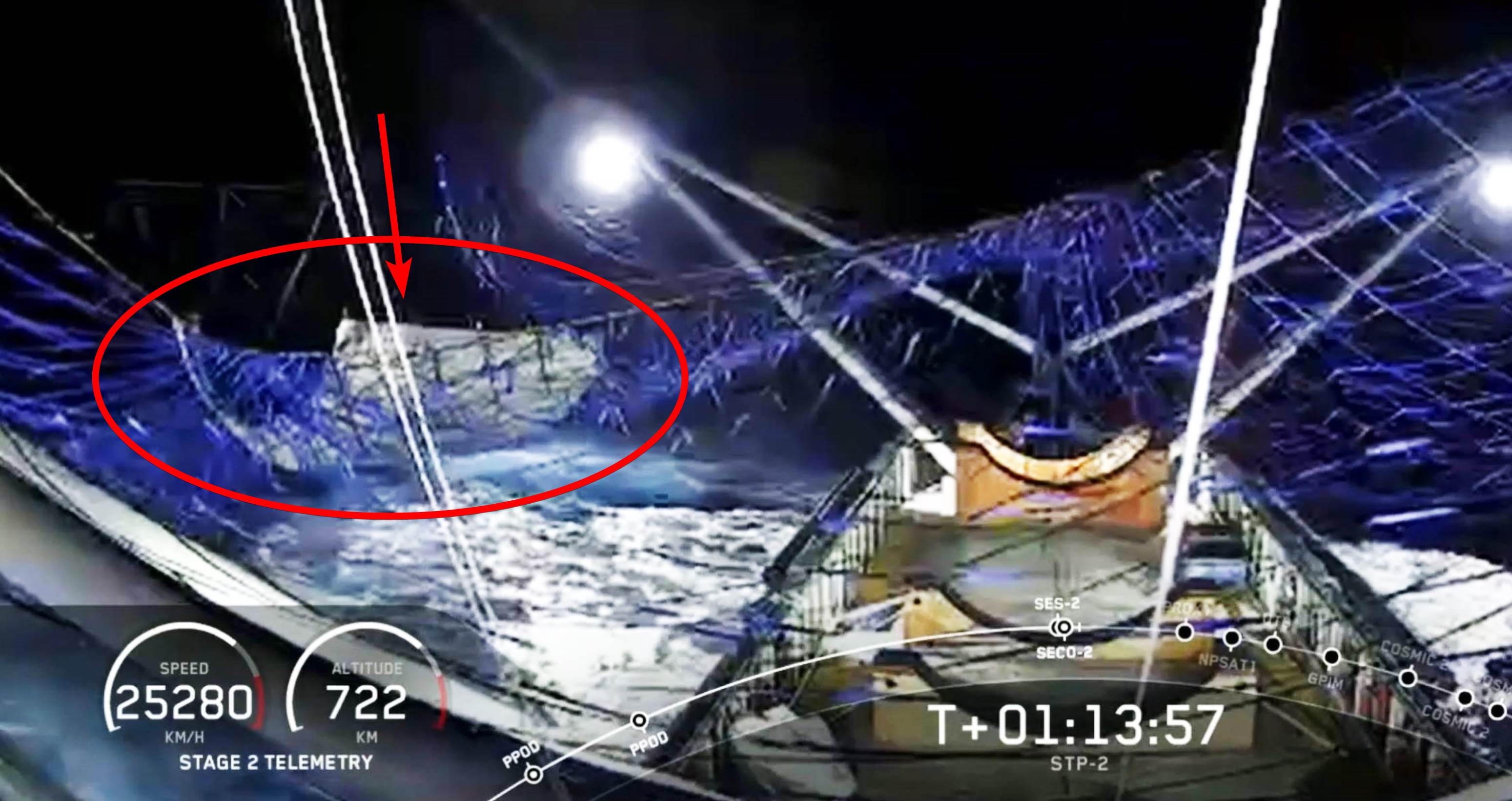 After more than 18 months of concerted effort, SpaceX has successfully caught a Falcon fairing in Mr. Steven’s (now GO Ms. Tree) net for the first time ever, a massive milestone along the road to payload fairing reusability.

Falcon Heavy lifted off for the third time around 2:30 am EDT (05:30 UTC) on June 25th, successfully carrying 24 unique satellites – weighing ~3700 kg (8200 lb) total – into orbit atop a trusty Falcon upper stage. Known as Space Test Program 2 (STP-2), the Department of Defense (DoD) mission is incredibly important for a variety of reasons. Although Falcon Heavy center core B1057 was sadly unsuccessful in its attempt to land aboard drone ship Of Course I Still Love You (OCISLY), the rest of the mission (including fairing recovery!) is proceeding apace, with another 5+ hours to go before it is truly done.

Discussed on June 24th, this recovery attempt was a last-second surprise, coming on the heels of Mr. Steven being renamed to GO Ms. Tree, itself on the heels of a major refit with entirely new arms, booms, and a net.

“In a pleasant, last-minute surprise, SpaceX fairing recovery vessel Mr. Steven has departed Port Canaveral for its first Falcon fairing catch attempt in more than half a year. The speedy ship has already traveled more than 1250 km (800 mi) in ~48 hours and should soon be in position to attempt recovery of Falcon Heavy Flight 3’s payload fairing halves.

Over the last week or two, Mr. Steven has been officially renamed to GO Ms. Tree, a strong indicator that Guice Offshore (GO) – a company SpaceX is heavily involved with – has acquired the vessel from financially troubled owner/operator Sea-Tran Marine. With this likely acquisition, nearly all of SpaceX’s non-drone ship vessels are now leased from – and partially operated by – GO. The name change is undeniably bittersweet for those that have been following Mr. Steven’s fairing recovery journey from the beginning. However, it’s also more than a little fitting given that the vessel switched coasts and suffered an accident that forced SpaceX to replace the entirety of its arm-boom-net assembly. Much of Mr. Steven – now GO Ms. Tree – has been replaced in the last few months and with any luck, the vessel is better equipped than ever before to snag its first Falcon fairing(s) out of the air.”
— Teslarati.com, June 24th

Indeed, it’s more than a little bittersweet to see Mr. Steven’s first successful fairing catch – coming after more than a year of relentless work and countless failed catch attempts – must be attributed to GO Ms. Tree, a new name bestowed upon the vessel after it was purchased from its ailing owner by Guice Offshore (GO).

Regardless, who-did-what-when is just a pittance in the face of the massive achievement SpaceX’s fairing recovery team have pulled off today. With this first fairing catch, SpaceX can begin properly analyzing the condition of a truly flight-proven, salt water-free fairing half, hopefully allowing the company to conclude that they can be reused with relative ease. True fairing recovery and reuse would ultimately be a boon for all SpaceX missions, but would particularly benefit the company’s own Starlink launches, cutting the cost of a new fairing from each internal mission’s marginal cost.

Given that Mr. Steven (GO Ms. Tree) was able to catch this fairing half under moonlight, it bodes quite well for future daytime recoveries. SpaceX’s next East Coast launch with a payload fairing is expected no earlier than late July.