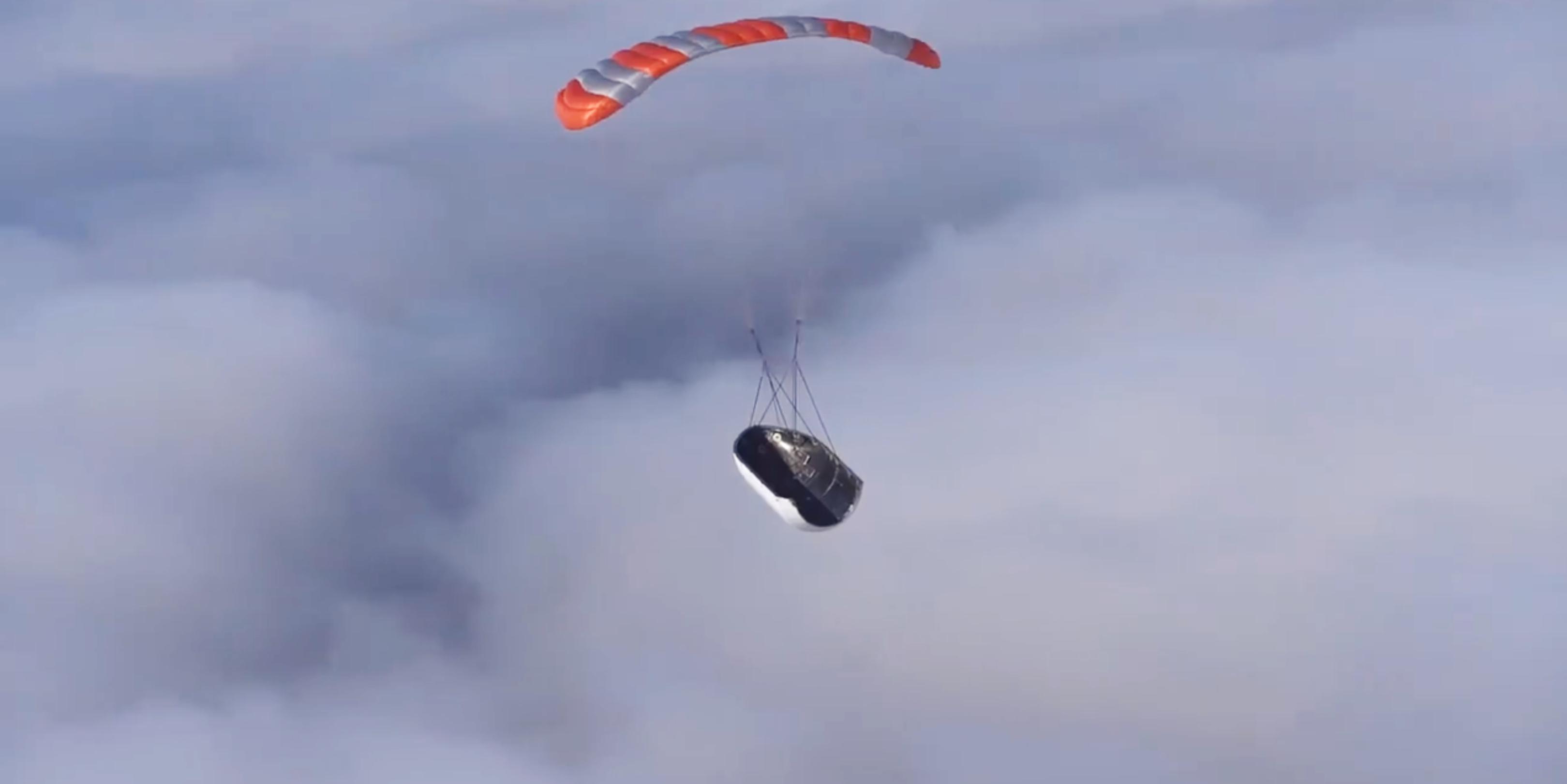 A Falcon fairing sails under its lightweight parafoil. GO Ms. Tree (formerly Mr. Steven) is set for its first fairing catch attempt in more than half a year. (SpaceX)

In a pleasant, last-minute surprise, SpaceX fairing recovery vessel Mr. Steven has departed Port Canaveral for its first Falcon fairing catch attempt in more than half a year. The speedy ship has already traveled more than 1250 km (800 mi) in ~48 hours and should soon be in position to attempt recovery of Falcon Heavy Flight 3’s payload fairing halves.

In another surprise, Mr. Steven has been renamed to GO Ms. Tree, a strong indicator that Guice Offshore (GO) – a company SpaceX is heavily involved with – has acquired the vessel from financially troubled owner/operator Sea-Tran Marine. With this likely acquisition, nearly all of SpaceX’s non-drone ship vessels are now leased from – and partially operated by – GO. The name change is undeniably bittersweet for those that have been following Mr. Steven’s fairing recovery journey from the beginning. However, it’s also more than a little fitting given that the vessel switched coasts and suffered an accident that forced SpaceX to replace the entirety of its arm-boom-net assembly. Much of Mr. Steven – now GO Ms. Tree – has been replaced in the last few months and with any luck, the vessel is better equipped than ever before to snag its first Falcon fairing(s) out of the air. Falcon Heavy is scheduled to lift off no earlier than (NET) 11:30 pm ET (03:30 UTC), June 24th.

Not one to dip his/her toes in first, Mr. Steven/GO Ms. Tree’s first fairing recovery attempt since crossing the Panama Canal will be a record-breaker. In yet another last-second surprise, Falcon Heavy Flight 3 – assigned to the US Air Force’s Space Test Program 2 (STP-2) mission – had its center core recovery profile radically modified just days ago, moving the booster’s drone ship landing from ~40 km offshore to more than 1240 km (770 mi) off the coast of Florida.

Given that the upper stage and its fairing-shrouded payload inherently separate after the center stage, after which the two fairing halves are ejected, those fairings will end up even further downrange than the center stage. In the case of Falcon Heavy’s STP-2 mission, the fairing halves could end up splashing down (or, hopefully, landing in a net) anywhere from 1400-1600 km (870-1000 mi) downrange from SpaceX’s Pad 39A Cape Canaveral launch facilities.

With a fairing recovery attempt more than ~1400 km downrange and an attempted Falcon Heavy center core landing nearly 1250 km off the Florida coast, Falcon Heavy’s STP-2 mission is chock-full of records. As discussed previously on Teslarati, aside from the surprise recovery records-to-be, STP-2 will be a milestone launch attempt for several additional reasons.

“To successfully complete STP-2, the upper stage will be subjected to ‘four separate upper-stage engine burns, three separate deployment orbits, a final propulsive passivation maneuver, and a total mission duration of over six hours.‘ It will likely be SpaceX’s most technically-challenging launch ever.”
— Teslarati.com, 06/19/2019

“The US Air Force has decided that STP-2 presents an excellent opportunity to begin the process of certifying flight-proven SpaceX rockets for military launches. The STP-2-related work is more of a preliminary effort for the USAF to actually figure out how to certify flight-proven commercial rockets, but it will still be the first time a dedicated US military mission has flown on a flight-proven launch vehicle. Down the road, the processes set in place thanks – in part – to STP-2 and Falcon Heavy may also apply to aspirational rockets like Blue Origin’s New Glenn and ULA’s “SMART” proposal for Vulcan reuse.”
— Teslarati.com, 06/16/2019

In almost every conceivable way, STP-2 will absolutely be the most challenging launch SpaceX has ever attempted. Success would effectively confirm beyond any reasonable doubt that SpaceX is just as capable as – if not more capable than – its sole US competitor, Lockheed Martin and Boeing’s United Launch Alliance (ULA). On top of being able to compete for and perform all mission profiles required by the US military and NASA, SpaceX will also remain the only entity (private or public) in the world that is actively launching, landing, and refusing orbital-class rocket hardware.

Tune in to SpaceX’s hosted webcast around 11:15 pm ET (03:15 UTC), June 24th to watch Falcon Heavy’s third launch ever and (hopefully) catch a glimpse of multiple record-breaking recovery attempts and Falcon S2’s most challenging mission ever.