Strengthening the odds that SpaceX’s first Block 5 rocket will soon become the first Falcon 9 to launch three times, a SpaceX booster arrived at Vandenberg Air Force Base (VAFB) on 10/25 ahead of Spaceflight Industry’s SSO-A rideshare mission, scheduled for launch no earlier than November 19th.

Notably, a flurry of spottings posted on social media offers a unique glimpse into the major logistical infrastructure SpaceX has built up over years of transporting massive Falcon rockets across the continental US. 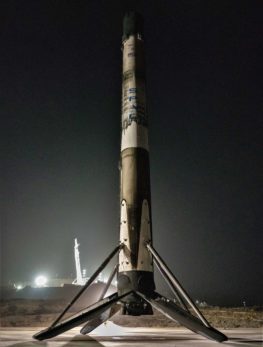 Barely 24 hours after SpaceX successfully launched SAOCOM 1A, a Falcon 9 upper stage was seen traveling north just a few miles away from Vandenberg, wasting no time at all to fill the momentarily empty SLC-4 integration hangar. Two weeks after the second stage arrived, a Falcon 9 booster was spotted heading through Santa Maria towards VAFB, approximately on schedule for SSO-A’s targeted Nov 19 launch date.

Traveling from Hawthorne, CA, the identity of this particular booster is especially ambiguous. Due to a lack of on-base space at SpaceX’s Vandenberg facilities, there simply isn’t enough room for multiple boosters to be worked on in the SLC-4 hangar, meaning that the arrival of one rocket necessitates the departure of another. After landing for the first time at SpaceX’s West Coast LZ-4, Falcon 9 B1048 seems to have remained at the launch pad (assuming it didn’t manage to depart without being spotted). As such, the arrival of a booster on Oct 25 is firm evidence that B1048 is either not going to launch SSO-A or was refurbished at SpaceX’s Hawthorne factory a few hundred miles south of VAFB.

Neither outcome would be shocking: to be ready in time to launch SSO-A, B1048 would have had barely five weeks to go from landing at LZ-4 after its second flight to being ready for the rocket’s third flight. According to COO and President Gwynne Shotwell, Falcon 9 Block 5 boosters have apparently lowered the amount of time needed for post-launch refurbishment to four weeks – presumably the minimum value for the time being. On the opposite coast, the first Falcon 9 Block 5 booster to be built and launched – B1046 – completed its second successful mission on August 7, leaving a comparatively luxurious three months for refurbishment and flight readiness review.

Whether B1046 or B1048 rolls out of SpaceX’s Vandenberg hangar next month, the fact that a Falcon 9 booster was deemed ready for its third launch at all will be a huge achievement for the company and its ultimate goal of realizing aircraft-like reusability for orbital-class rockets.

Including the Falcon 9 booster that arrived at Vandenberg late last week, the sheer number of SpaceX rockets photographed mid-transport in the last week alone is – from a public perspective – quite possibly a record. The same night as that mystery booster arrived at SpaceX’s West Coast launch site, SpaceX announced that it had completed a static fire of Falcon 9 B1051 – assigned to Crew Dragon’s uncrewed launch debut – in McGregor, Texas. On October 28, a SpaceX fan observed a separate Falcon 9 booster heading east through Arizona, either a new booster being shipped from Hawthorne to Texas or B1048 on its way to Texas or Florida for refurbishment and launch #3.

Finally, yet another Falcon 9 was spotted eastbound a few miles east of SpaceX’s McGregor rocket test facilities on October 30. While most likely the same booster spotted in Arizona on the 28th, the restless pace of SpaceX’s cross-country hardware transport almost defies the tracking abilities of those watching from the outside.