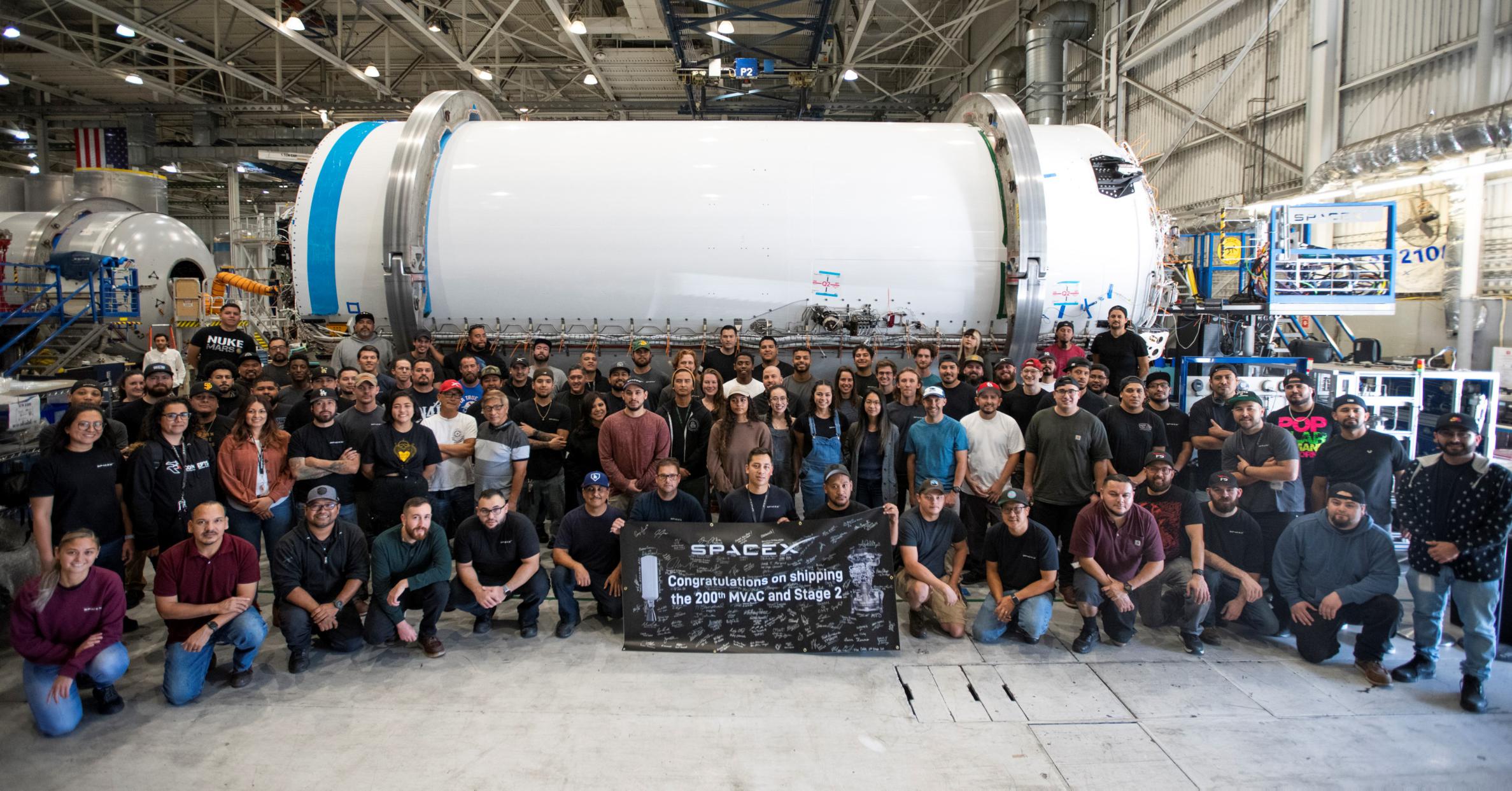 SpaceX has built and shipped its 200th Falcon second stage, highlighting the often underappreciated rocket’s record of achievement on the ground and in flight.

Approximately 13 years ago, in late 2009 or early 2010, SpaceX shipped the first flightworthy prototype of the first iteration of its Falcon 9 second stage. In June 2010, Falcon 9 lifted off on its inaugural test flight and, with the help of that second stage, successfully launched a boilerplate mockup of Dragon spacecraft into orbit. Since Falcon 9’s surprising inaugural success, SpaceX’s Falcon 9 and Falcon Heavy rockets have launched another 187 times for a total of 188 launches and 189 assembled rockets. Every one of those launches has required a new second stage, and all but one (Crew Dragon’s In-Flight Abort test) required a new Merlin Vacuum engine.

SpaceX just completed its 188th Falcon 9/Heavy launch, so the 200th flightworthy second stage and Merlin Vacuum (MVac) engine are probably scheduled to launch sometime in January 2023. In the last 365 days, SpaceX’s Falcon rockets have completed 59 successful orbital launches. Every launch has required a new second stage, so SpaceX, on average, has consistently built, shipped, and tested a new Falcon second stage every 6.2 days for more than a year.

Thanks to SpaceX’s record-breaking 2022 launch cadence, which has resulted in Falcon 9 launching more in one calendar year than any other rocket in history, the Falcon second stage has likely become the most-produced orbital rocket stage in decades. Barring surprises, SpaceX is on track to achieve CEO Elon Musk’s goal of 60 Falcon launches in 2022. But SpaceX isn’t done yet, and CEO Elon Musk says that the company is targeting “up to 100 launches” in 2023. After nearly doubling between early and late 2021, that will require Falcon second stage production to increase another ~67% year-over-year.

In its 12.5-year career, Falcon 9 has suffered three failures. In October 2012, on its third launch, one of Falcon 9’s nine Merlin 1C booster engines failed in flight. The main mission – a Dragon cargo mission to the International Space Station – was saved by the second stage, which autonomously compensated for the lost performance, but a secondary payload (Orbcomm’s first OG2 satellite prototype) was lost as a result. In June 2015, a faulty strut inside Falcon 9’s second stage caused a helium pressure vessel to break loose and rupture, destroying the rocket mid-flight. And in September 2016, during a prelaunch static fire test, a similar pressure vessel inside an upgraded Falcon 9’s second stage spontaneously sparked, causing an explosion that destroyed the rocket while it was still on the ground.

After Falcon 9’s successful November 3rd, 2022 launch of the Eutelsat Hotbird 13G communications satellite, SpaceX’s Falcon rocket family has completed 160 launches without failure, arguably making it the most reliable rocket family in history. To achieve that feat with its partially-reusable Falcon 9 and Falcon Heavy rockets, SpaceX has had to master reusable and expendable orbital rockets to a degree that only a few other companies or space agencies in history can claim to have matched or exceeded, and that none have achieved simultaneously.