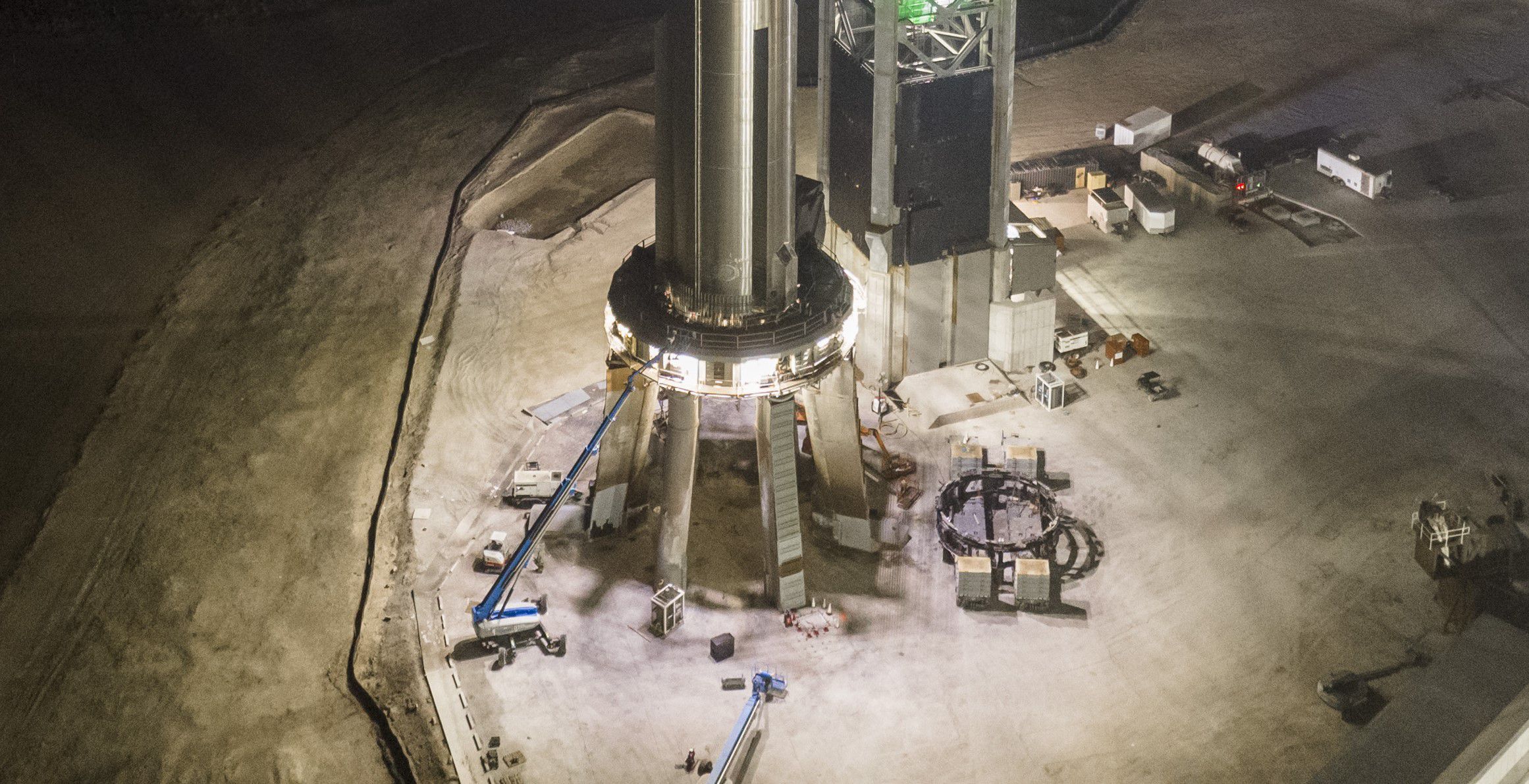 SpaceX to ship Starship ‘deluge’ hardware from Florida to Starbase

SpaceX may have plans to upgraded Starbase's orbital Starship launch pad with a 'deluge' system shipped from Florida. (SpaceX)

SpaceX appears to be preparing to ship a huge collection of hardware – including parts of a possible launch deluge system – from Florida to Texas.

But combined with the sheer volume of hardware and its privileged presence on NASA KSC property, the last part to arrive – the base of an unmistakable Starship (booster) transport stand – all but confirmed that the destination is Starbase. SpaceX has already shipped hardware from Florida to Starbase multiple times, including a trio of tanks sent in October 2022, which further increases the odds that everything visible is destined for Starbase.

It might also not be a coincidence that in its first attempt to build a Starship launch site at Kennedy Space Center, SpaceX installed four midsize tanks and plenty of high-pressure gas tanks at LC-39A. The resurgence of work on a totally different Starship pad design at 39A in late 2021 likely made that hardware redundant. It’s possible that the four smaller tanks set to be shipped to Starbase originated at 39A and are being moved in the hopes that they can be more useful elsewhere.

A deluge? Under my Starship?

The most interesting part of the shipment is arguably a group of giant metal tubes. Measuring several feet wide, dozens of feet long, and fitted with multiple outlets connected to the same giant pipe, the likeliest possible explanation is that the manifolds are part of a plan to upgrade SpaceX’s Texas Starship launch site with a deluge system.

Almost all rockets use some sort of deluge system to prevent their own exhaust from damaging or destroying themselves or their surroundings. A large volume of water sprayed into the space just below a rocket’s engines can prevent the immense acoustic energy (sound) they produce from wreaking havoc. A deluge also helps protect launch pad hardware by allowing some of the energy in the exhaust to boil and vaporize water instead of eating into concrete or steel. But CEO Elon Musk has infamously stated that SpaceX is intentionally attempting to build an orbital launch site without a deluge system for Starship, the most powerful rocket in history by a large margin.

That’s gone about as well as one might expect. Even Starship, which can produce about 18% as much thrust as Super Heavy, has repeatedly incinerated the concrete beneath its test stand, spreading molten debris for thousands of feet and starting major brush fires in a nature reserve. After every six-engine Starship static fire, SpaceX must painstakingly remove and replace all of the concrete beneath the test stand.

The problem is even more apparent at Starbase’s orbital launch mount, where SpaceX has begun to conduct Super Heavy booster static fire tests. Despite apparently using expensive high-temperature concrete, SpaceX has had to replace the concrete under the OLM after almost every Super Heavy static fire – a process that takes a week or two.

For the time being, Starbase’s environmental permit only allows up to five orbital launches per year, making lengthy post-launch repairs mostly inconsequential. But if SpaceX ever wants Starbase to rapidly launch multiple Starships back to back (essential for in-space refilling) or launch dozens of Starships per year, it’s become clear that a deluge system is likely essential.

Some part of SpaceX knows that. The design of Starship’s first Florida launch pad has already been upgraded to include a giant deluge ring embedded in the ground at the base of the mount. Unusual design aside, the structure is sized such that it’s almost certainly a high-flow deluge system capable of spraying thousands of gallons of water per second.

Three months later, SpaceX appears to be preparing to ship two giant deluge manifolds and some deluge plumbing from Florida to Starbase. If SpaceX intends to retrofit Starbase’s existing orbital launch site with a giant deluge system, the process would likely take months and render the pad more or less unusable from start to finish. Alternatively, Musk recently reported that SpaceX intends to build a “rocket test facility” at a separate property it purchased in South Texas. Located miles from the Starbase launch pad, the former gun range could potentially allow SpaceX to test Starships and Super Heavy boosters without disrupting orbital launch preparations and taking over Starbase’s only orbital launch mount.

Perhaps it’s not a coincidence that the same site – currently used for storage and limited Starship tank testing – already hosts some smaller parts of a potential Starbase deluge system. Regardless, it’s clear that significant changes are coming to Starbase and its associated facilities.

SpaceX to ship Starship ‘deluge’ hardware from Florida to Starbase