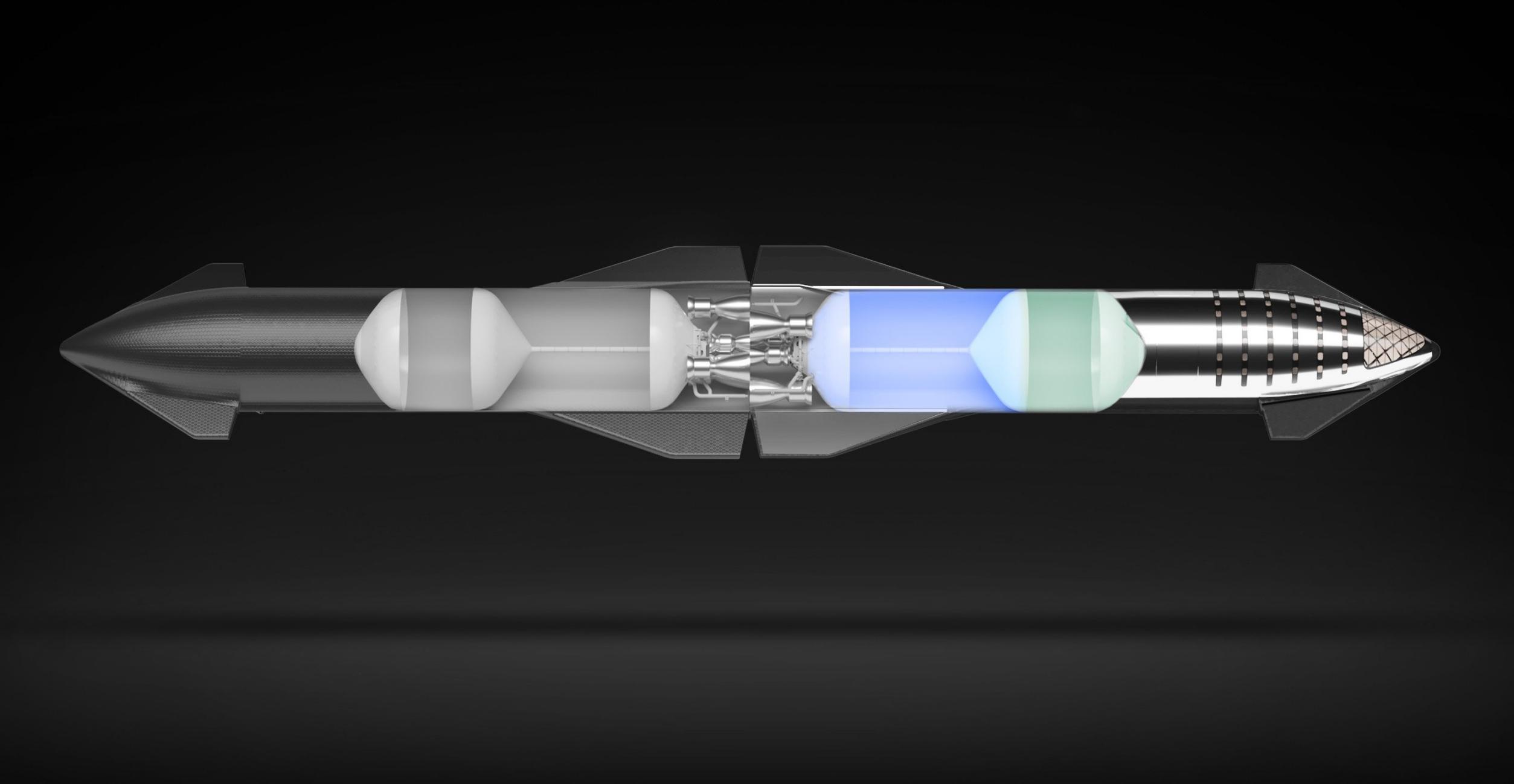 Perhaps the single biggest mystery of SpaceX’s Starship program is how exactly the company plans to refuel the largest spacecraft ever built after they reach orbit.

First revealed in September 2016 as the Interplanetary Transport System (ITS), SpaceX has radically redesigned its next-generation rocket several times over the last half-decade. Several crucial aspects have nevertheless persisted. Five years later, Starship (formerly ITS and BFR) is still a two-stage rocket powered by Raptor engines that burn a fuel-rich mixture of liquid methane (LCH4) and liquid oxygen (LOx). Despite being significantly scaled back from ITS, Starship will be about the same height (120 m or 390 ft) and is still on track to be the tallest, heaviest, and most powerful rocket ever launched by a large margin.

Building off of years of growing expertise from dozens of Falcon 9 and Falcon Heavy launches, the most important fundamental design goal of Starship is full and rapid reusability – propellant being the only thing intentionally ‘expended’ during launches. However, like BFR and ITS before it, the overarching purpose of Starship is to support SpaceX’s founding goal of making humanity multiplanetary and building a self-sustaining city on Mars. For Starship to have even a chance of accomplishing that monumental feat, SpaceX will not only have to build the most easily and rapidly reusable rocket and spacecraft in history, but it will also have to master orbital refueling.

In the context of SpaceX’s goals of expanding humanity to Mars, a mastery of reusability and orbital refueling are mutually inclusive. Without both, neither alone will enable the creation of a sustainable city on Mars. A Starship launch system that can be fully reused on a weekly or even daily basis but can’t be rapidly and easily refueled in space simply doesn’t have the performance needed to affordably build, supply, and populate a city on another planet (or Moon). A Starship launch system that can be easily refueled but is not rapidly and fully reusable could allow for some degree of interplanetary transport and the creation of a minimal human outpost on Mars, but it would probably be one or two magnitudes more difficult, risky, and expensive to operate and would require a huge fleet of ships and boosters from the start.

The question of how SpaceX will make Starship the world’s most rapidly, fully, and cheaply reusable rocket is a hard one, but it’s not all that difficult to extrapolate from where the company is today. Currently, the turnaround record (time between two flights) for Falcon boosters is two launches in less than four weeks (27 days). SpaceX’s orbital-class reuse is also making strides and the company recently flew the same orbital Crew Dragon capsule twice in just 137 days (less than five months) – fast approaching turnarounds similar to NASA’s Space Shuttle average, the only other reusable orbital spacecraft in history.

While Dragon and Falcon 9 are far smaller than Starship and Super Heavy, Dragon is only partially reusable and requires significant refurbishment after recovery and Falcon 9 boosters are fairly complex. Starship, on the other hand, should effectively serve as a fully reusable all-in-one Falcon upper stage, Dragon capsule, Dragon trunk, and fairing, making it far more complex but potentially far more reusable. To an extent, Super Heavy should also be mechanically simpler than Falcon boosters (no deployable legs or fins; no structural composite-metal joints; no dedicated maneuvering thrusters) and its clean-burning Raptor engines should be easier to reuse than Falcon’s Merlins. Put simply, there are precedents set and evidence provided by Falcon rockets and NASA’s Space Shuttle that suggest SpaceX will be able to solve the reusability half of the equation.

The other half of that equation, however, could not be more different. The sum total of SpaceX’s official discussions of orbital refueling can be summed up in a sentence included verbatim in CEO Elon Musk’s 2017, 2018, and 2019 Starship presentations: “propellant settled by milli G acceleration using control thrusters.”

On the face of it, that simple phrase doesn’t reveal much. However, with a few grains of salt, hints from what the company’s CEO has and hasn’t said, and context from the history of research into orbital propellant transfer, it’s possible to paint a fairly detailed picture of the exact mechanisms SpaceX will likely use to refill Starships in space. The cornerstone, somewhat ironically, is a 2006 paper – written by seven Lockheed Martin employees and a NASA engineer – titled “Settled Cryogenic Propellant Transfer.” Aside from the obvious corollaries just from the title alone, the paper focuses on what the authors argue is the simplest possible route to large-scale orbital propellant transfer.

The principles behind such a ‘settled propellant transfer’ are fairly simple and intuitive. The crucial question is how much acceleration the process requires and how expensive that continuous acceleration ends up being. According to Kutter et al’s 2006 paper, the answer is surprising: assuming a 100 metric ton (~220,000 lb) spacecraft pair accelerates at 0.0001G (one ten-thousandth of Earth gravity) to transfer propellant, they would need to consume just 45 kg (100 lb) of hydrogen and oxygen propellant per hour to maintain that acceleration.

In the most extreme hypothetical refueling scenario (i.e. a completely full tanker refueling a ship with a full cargo bay), two docked Starships would weigh closer to 1600 tons (~3.5M lb) and the “Milli G” acceleration SpaceX has repeatedly mentioned in presentation slides would be ten times greater than the maximum acceleration analyzed by Kutter et al. Still, according to their paper, that propellant cost scales linearly both with the required acceleration and with the mass of the system. Roughly speaking, using the same assumptions, that means that the thrusting Starship would theoretically consume just over 7 tons (half a percent) of its methane and oxygen propellant per hour to maintain milli-G acceleration.

With large enough pipes (on the order of 20-50 cm or 8-20 in) connecting each Starship’s tanks, SpaceX should have no trouble transferring 1000+ tons of propellant in a handful of hours. Ultimately, that means that settled propellant transfer even at the scale of Starship should incur a performance ‘tax’ of no more than 20-50 tons of propellant per refueling. All transfers leading up to the worst-case 1600-ton scenario should also be substantially more efficient. Overall, that means that fully refueling an orbiting Starship or depot with ~1200 tons of propellant – requiring anywhere from 8 to 14+ tanker launches – should be surprisingly efficient, with perhaps 80% or more of the propellant launched remaining usable by the end of the process.

A step further, Kutter et al note the amount of acceleration required is so small that a hypothetical spacecraft could potentially use ullage gas vents to achieve it, meaning that custom-designed settling thrusters might not even be needed. Coincidentally or not, SpaceX (or CEO Elon Musk) has recently decided to use strategically located ullage vents to replace purpose-built maneuvering thrusters on Starship’s Super Heavy booster. If SpaceX adds similar capabilities to Starship, it’s quite possible that the combination of cryogenic propellant naturally boiling into gas as it warms and the ullage vents used to relieve that added pressure could produce enough thrust to transfer large volumes of propellant.

Last but not least, writing more than a decade and a half ago, the only technological barrier Kutter et al could foresee to large-scale settled propellant transfer wasn’t even related to refueling but, rather, to the ability to autonomously rendezvous and dock in orbit. In 2006, while Russia was already routinely using autonomous docking and rendezvous technology on its Soyuz and Progress spacecraft, the US had never demonstrated the technology on its own. Jump to today and SpaceX Dragon spacecraft have autonomously rendezvoused with the International Space Station twenty seven times in nine years and completed ten autonomous dockings – all without issue – since 2019.

Even though SpaceX and its executives have never detailed their approach to refueling (or refilling, per Musk’s preferred term) Starships in space, there is a clear path established by decades of NASA and industry research. What little evidence is available suggests that that path is the same one SpaceX has chosen to travel. Ultimately, the key takeaway from that research and SpaceX’s apparent use of it should be this: while a relatively inefficient process, SpaceX has effectively already solved the last remaining technical hurdle for settled propellant transfer and should be able to easily refuel Starships in orbit with little to no major development required.

There’s a good chance that minor to moderate problems will be discovered and need to be solved once SpaceX begins to test refueling in orbit but crucially, there are no obvious showstoppers standing between SpaceX and the start of those flight tests. Aside from the obvious (preparing a new rocket for its first flight tests), the only major refueling problem SpaceX arguably needs to solve is the umbilical ports and docking mechanisms that will enable propellant transfer. SpaceX will also need to settle on a location for those ports/mechanisms and decide whether to implement ullage vent ‘thrusters’, cold gas thrusters like those on Falcon and current Starship prototypes, or more efficient hot-gas thrusters derived from Raptors. At the end of the day, though, those are all solved problems and just a matter of complex but routine systems engineering that SpaceX is an expert at.