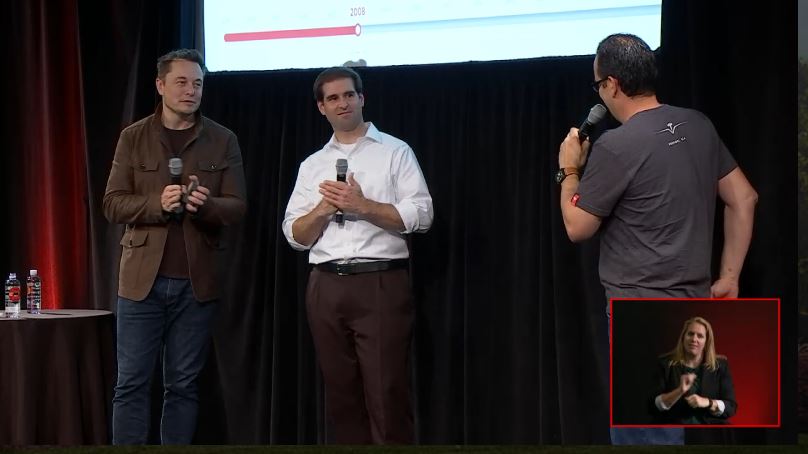 Tesla CEO Elon Musk and CTO JB Straubel spent a freewheeling three plus hours recapping the history of Tesla Motors, and what came out of it was two items of news that were of interest to investors.

First the positive. Elon announced that “Tesla has now realized it can produce ~3 times more batteries in the same initial planned form factor of the Gigafactory than the crew initially expected.”

Second, the negative. Elon suggested for the first time that Supercharging will not be free to Tesla Model 3 owners, though available as an optional “package”.

Elon explained that “It will still be very cheap, and far cheaper than gasoline, to drive long-distance with the Model 3, but it will not be free long distance for life unless you purchase that package. I wish we could [make it free], but in order to achieve the economics, it has to be something like that. It’s not because we want to make things more expensive, it is because we can’t figure out how to make it less expensive.”

No price was disclosed for the additional Supercharger package. Notice that early Tesla Model S 60 owners had the same option available as a $2,000 option at the time of ordering and $2,500 to upgrade thereafter.

Of those two items of news, traders took the negative as more important and the stock dumped effectively stopping the 10-day positive pay-day-cycle.

My trade that started on May 18, closed out when my conditional stop hit $220, a $8 swing, so I am not “unhappy” (one major rule for traders to follow to avoid anger: “do not be greedy”).

Looking at the stock chart and indicators right now, I can see that (1) the Heikin Ashi has been negative (red) for two sessions; (2) the stock has dropped below the 200-day moving average; (3) the MACD has gone red and (4) the MACD averages have flattened and are close to “pinching”, a trading action that could soon turn into a crossing of the MACD to the bears. All indicators tell me to stay away from the stock, until the short term action changes to bullish again. Trade safe.