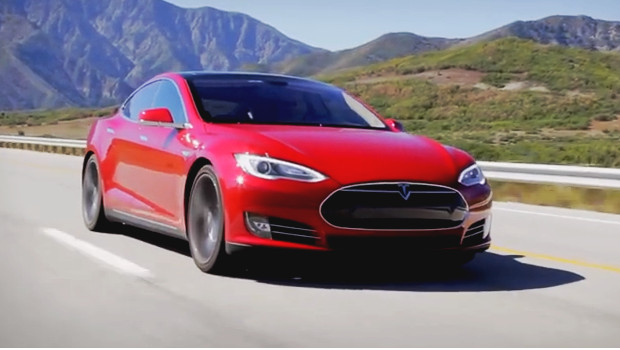 Our good friend Laurie Orloski is giving us 11 good reasons why any woman would want to own a Models S. We were wondering what you think about them.

The sound system of the Tesla Model S is so high fidelity it fills every inch of the cabin with your favorite jamming tunes (with a top volume of 11, true story), simultaneously drowning out any screaming/fighting/complaining/nagging/whining/etc. children who may be co-passengers.

The Tesla Model S is so long that any screaming/fighting/complaining/nagging/whining/etc. children traveling in the optional rear-facing kids seats are way, way muffled, making for a far quieter and Zen-like ride than is possible in any other car, even for an already tranquil electric vehicle (EV)

9. Retractable door handle means kids get in without fuss!

Shiny retractable door handles of the Tesla Model S are an automatic kid magnet, promoting an unrelenting willingness to actually get into the car voluntarily without any fuss or battle. Yes, ladies, kids will actually be quite willing to open their own door and hop right in. Shocking, we know.

8. The tunnel of personal affairs

The Tesla Model S is so wide with an open area between the two front seats, providing an excellent spot for storing your belongings, purse, and other collection, even matching spare shoes.

The Tesla Model S has so much cargo space, it even rivals the largest SUV, allowing for shopping galore!! The best part is it doesn’t have the inconvenience of having to risk damaging your heels by hopping up into an overpriced, over raised truck, huh, I mean SUV.

With the lack of an engine taking up precious room, you get a bonus front trunk (aka frunk) which is way cooler than a circa-2012 trunk; having a frunk makes it socially acceptable to stick your nose in the air, you earned it

If you are in need of some criticism and drama to spice up your life, you can very easily make friend-emies or plain old enemies online. It truly takes little to no effort to push the buttons of guys who are secretly so jealous that you, a woman for goodness sake, is driving the car that they have been drooling all over. Bonus tip: be sure to sound knowledgeable about your car, that really ticks men off and gets the drama raging.

The Tesla Model S will save you thousands of dollars a year in gas savings, which can certainly be put to good use during your next trip to the mall.

If you are in need of romance, the Tesla Model S provides the opportunity to meet and screen numerous men on any given day; all you have to do is go somewhere, anywhere really, and you will evoke an automatic flies on fly paper/swarming bees effect. Love it!

Another unintended benefit of an electric car like the Model S is that with no need to ever stop at another gas station, ever, it will give you back those precious extra minutes that can be redirected to last-minute primping of your hair, makeup, and/or nails. Think about the stunning results when you walk out of the car…

I don’t know about you, but by driving a Tesla Model S, those carefully manicured hands should never have to touch an icky, smelly, dirty, and heavy gas pump hose again; or, if you are not a routine gas pumper, you will not have to waste any precious breath asking a man to do it for you.

So what’s holding you up ladies? According to many statistics, you command more than 60% of the automotive purchases. Who wouldn’t want a car like that? Tell us why you love, or not a Tesla Model S.