FREMONT, CA – AUGUST 16: Jinyao Desandies (R) and Dandre Desandies (L) plug the Tesla Supercharger into their Tesla Model S sedan outside of the Tesla Factory on August 16, 2013 in Fremont, California. Tesla Motors opened a new Supercharger station with four stalls for public use at their factory in Fremont, California. The Superchargers allow owners of the Tesla Model S to charge their vehicles in 20 to 30 minutes for free. There are now 18 charging stations in the U.S. with plans to open more in the near future. 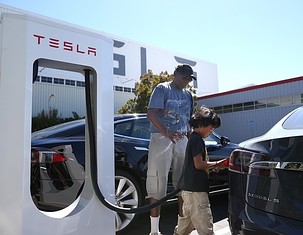