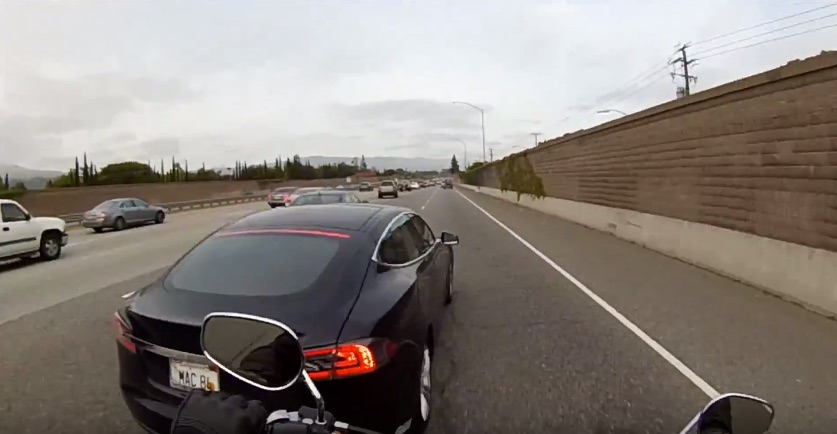 A recent video on YouTube by H-D Rider R U purports to show a driver of a Tesla Model S cutting off a biker, but was that really the case?

During the 46 second long video, the Harley rider records himself lane splitting on the entrance ramp to a highway. The rider even passes a police cruiser at one point while determined to be the head of the line. The video caught via helmet cam shows the rider pulling up to the right of a black Tesla Model S just as the traffic light changes to green. Both vehicles take off and the Tesla is seen accelerating (as electric cars tend to do) ahead of the Harley. The Harley rider appears to force the issue by attempting to pass the Tesla on the right. The Tesla cuts to the right, almost collecting the motorcycle in the process. Incensed, the Harley rider gives chase before pulling along side the Model S where both drivers express a bit of road rage with one another.

I am a reformed biker. I learned the hard way that a prudent motorcycle rider assumes every other driver is out to get him. Every driver who could blow through a red light or stop sign will do so. The only way to ride safe is to drive defensively, especially on a congested highway. Those who don’t too often end up as organ donors.

At least the Model S driver used his turn signal.