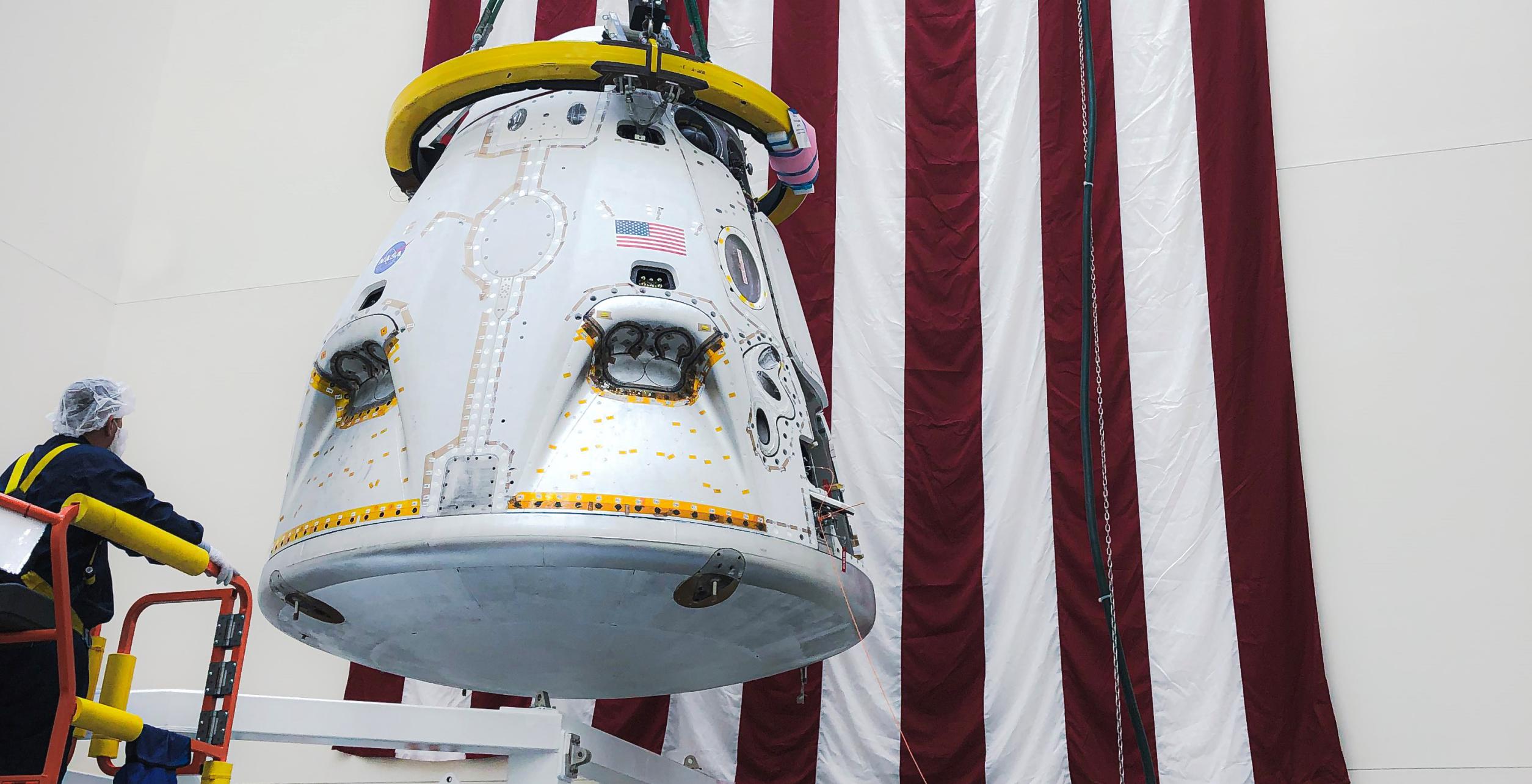 SpaceX Crew Dragon capsule C205 is in the late stages of processing ahead of its first flight and the spacecraft's second Falcon 9 launch overall. (SpaceX)

NASA has published a new SpaceX photo of the next Crew Dragon spacecraft scheduled for launch and confirmed that the mission is now scheduled to lift off on a Falcon 9 rocket no earlier than (NET) January 18th.

Known as an In-Flight Abort (IFA) test, the exceptionally challenging mission will represent a major milestone for Crew Dragon regardless of the results. Meant to simulate an abort at the (near) worst possible time during launch, Crew Dragon will ignite its SuperDraco abort thrusters around 60-90 seconds after liftoff, subjecting the spacecraft to even more extreme stresses around the same time both it and Falcon 9 are passing through Max Q – “the moment of peak mechanical stress”. If the test is unsuccessful, SpaceX Demo-2 – Crew Dragon’s first NASA astronaut launch – would almost certainly be delayed several months.

If successful, however, it could pave the way for Crew Dragon’s first astronaut perhaps just a month or two later, although Q2 2020 is much more likely. Simultaneously, while difficult to rationally explain, Boeing appears confident that its Starliner spacecraft – having lost control and failed to reach the International Space Station (ISS) barely more than a week ago and suffered a parachute deployment failure on a pad abort test one month prior – is still on track for its first astronaut launch (“Crewed Flight Test”, CFT) just a handful of months from now. In line with the special treatment NASA seems fated to bestow upon Boeing, it appears that Crew Dragon and Starliner’s unofficial race to become the first commercial spacecraft to launch astronauts is as close as it’s ever been.

Regardless, January 18th represents a delay of one week since SpaceX and NASA’s last launch date announcement – NET January 11th, 2020 as of December 18th, 2019. January 11th was itself a week delay from January 4th, the first specific In-Flight Abort launch target released on December 6th, 2019. The date of Crew Dragon’s IFA test has thus technically slipped 14 days in the last 31 days, although it has also technically slipped 7 days in the last 19.

In other words, as previously discussed on Teslarati, those two weeks of delays mean that Falcon 9 and Crew Dragon will almost certainly launch sometime in January 2020 – a significant improvement in schedule assurance compared to Crew Dragon’s Demo-1 launch debut, which suffered some three months of delays despite its hardware being ready for flight throughout.

With any luck, thrice-flown Falcon 9 booster B1046 – all but guaranteed to be destroyed by Dragon’s abort test – could launch new Crew Dragon capsule C205 and an expendable trunk section perhaps just a single week after performing a routine static fire and wet dress rehearsal at Pad 39A. That would represent an almost sixfold improvement relative to the timing of the spacecraft’s first Falcon 9 launch, which took some six weeks to go from static fire to liftoff.

NASA says that the delay from January 11th to January 18th “allows additional time for spacecraft processing”, although the reality is almost certainly a pretty even split between SpaceX processing and NASA’s plodding review process (i.e. paperwork). Regardless, now standing just 11 days from the latest launch date, Crew Dragon’s second Falcon 9 launch is rapidly converging on a liftoff sometime in the last two weeks of January 2020.