Mr. Steven returned to port in October with a Falcon fairing half in his net after a day of testing. (Pauline Acalin)

The legal owners of SpaceX’s sole fairing recovery vessel are in dire financial straits, signaled by business owner Steven Miguez’s decision to file for bankruptcy as a last chance of protecting Seatran Marine, a company which owns and leases eight utility vessels known as crew boats.

Mr. Steven, leased by SpaceX in late 2017, is one of those crew boats, although he has since been dramatically modified to support a series of consecutively larger arms, nets, and other various components in hopes of eventually catching Falcon 9 payload fairings out of the air. While there is most likely no serious risk of SpaceX actually losing access to Mr. Steven, this development still raises the question of what will happen to the ship in the near and more distant future.

The bankruptcy paperwork filed is chapter 11 – "proposing a plan of reorganisation to keep a business alive." The paperwork protects Mr Steven from foreclosure for now so there is no immediate change to anything.

As indicated in the tweet above, the ultimate outcome – at least for the time being – is simple uncertainty, as Chapter 11 bankruptcy filings will prevent Miguez from having to foreclose on Mr. Steven in the short term. If the Miguez family can rapidly find a solution for its money troubles, all could proceed unchanged. However, with all due respect to the owners and to Seatran Marine’s employees, Chapter 11 bankruptcy simply is not easily undone and is generally a last resort to be used only after all alternative solutions have been exhausted. Chapter 11 bankruptcy proceedings can take anywhere from a few months to several years to complete, tending to take longer as the scale and complexity of the filing party grows.

Making the best of a bad situation

Leased by Seatran to operator Guice Offshore (GO), SpaceX’s primary fleet manager on both coasts, GO (and thus SpaceX) had contracted to pay at least $3300 a day to use Mr. Steven, although that contract expired in October 2018. The new terms are unclear and it’s unknown if a replacement contract has yet to be signed.

Given the situation at hand and despite the sad financial circumstances facing the vessel’s owners, SpaceX may be in the best position yet to purchase Mr. Steven outright, assuming the company expects to continue attempting Falcon fairing recoveries for the indefinite future. In 2015, namesake Steven Miguez took out a $22.5M loan to cover Mr. Steven’s construction costs, offering a rough price ceiling for the modern, high-performance Fast Supply Vessel (FSV). While the most obvious interested buyer would be GO itself, it’s unlikely that the company has a sum of that size to offer, meaning that GO would need to take out its own loan to acquire the ship. 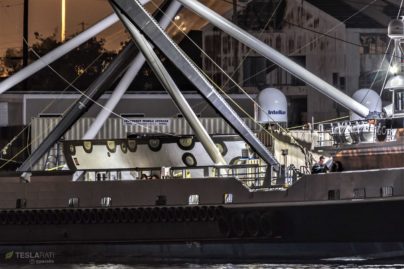 After an afternoon attempting to catch Falcon fairings dropped by a helicopter, Mr. Steven returned to port on Nov. 14. (Pauline Acalin) 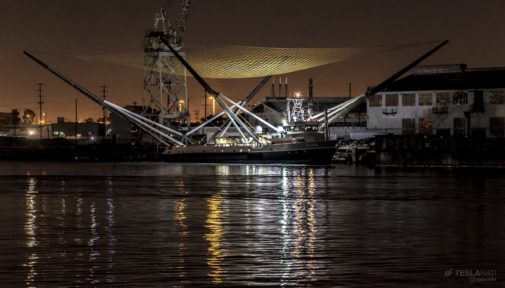 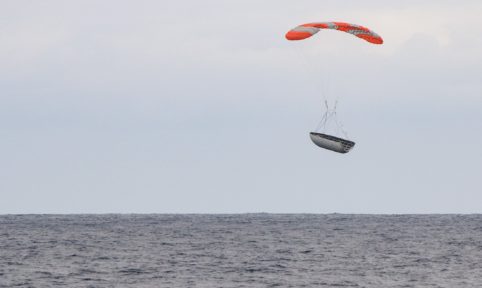 SpaceX, on the other hand, quite literally just closed a debt funding round of $250M, terms unknown, leaving the company more than enough liquid capital to enable a cash transaction assuming there is some interest in becoming Mr. Steven’s legal owner. SpaceX already owns its two operational autonomous spaceport drone ships (ASDS) outright and has extensively modified Mr. Steven to support fairing recovery, quite literally building its prototype recovery apparatus around the rented vessel. As the vessel’s new owner, SpaceX could likely keep contracting to GO for general operations and support, perhaps even continuing to lease Mr. Steven to GO to create as few waves as possible.

By selling Mr. Steven outright, Miguez could likely acquire more than enough funds to preserve Seatran Marine and its subsidiaries long enough to recover his financial footing and return his companies to a stable state.

In the meantime, it does not appear that these unfortunate legal issues have had a tangible impact on GO and SpaceX’s near-term ability to operate Mr. Steven. Around November 20th, SpaceX and GO crew performed the most recent of a series of Falcon fairing recovery tests, dropping a half from a helicopter to provide Mr. Steven a comparatively controlled environment to practice catches. Earlier this month, CEO Elon Musk appeared to imply that Mr. Steven would not attempt to catch Falcon 9’s fairing halves following the West Coast launch of SSO-A, at the time scheduled for November 19th.

Since then, SSO-A’s flight-proven Falcon 9 launch has slipped a full two weeks thanks to a combination of additional inspections and bad weather, now targeting launch NET December 2. It’s a stretch, but there is at least a slight chance that SSO-A’s excessive launch slips could mean that Mr. Steven will be able to attempt fairing recovery after all, at least per Musk’s suggestion that SpaceX would “try again next month”.

While coming into LA Harbor the other morning we saw Mr. Steven, the Payload Fairing recovery vessel that we (SpaceX) uses for west coast launches. There were several recoved Fairings on the dock next to the boat. In fact you can see one of them in this picture. So cool to finally see this. #spacex #mrsteven #rockets #spaceexploration #spaceflightiscool #iworkhere #laharbor #princesscruises #rubyprincess #cruiseship #abc7eyewitness #canon #canonphotography #canonphotos #elonmusk @spacex #onlyinsoutherncalifornia