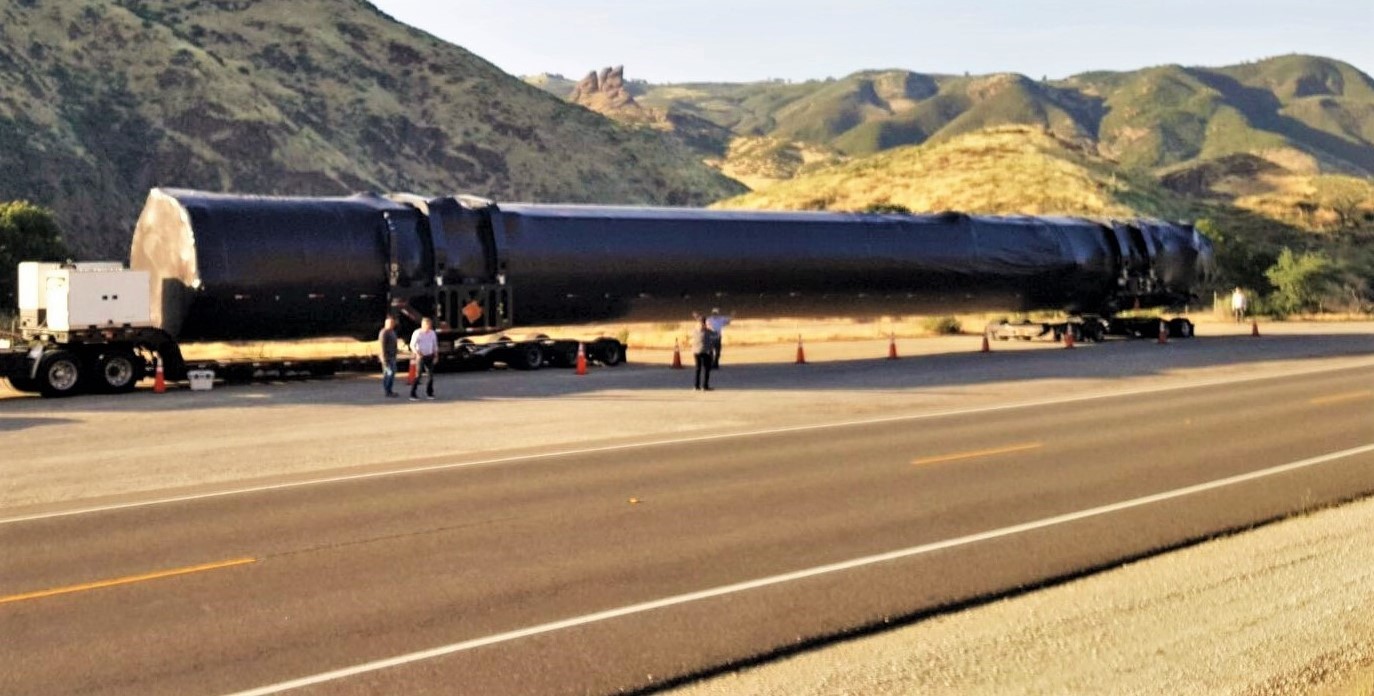 Falcon 9 B1051 is pictured here on its way to Vandenberg Air Force Base in May 2019. The booster was spotted heading the opposite direction on August 20th. (Jean Michel Levesque)

On August 20th, a member of a local California Facebook group happened to spot a SpaceX Falcon 9 booster in transit, an exceedingly rare sight as of late. Moving east, the booster is almost certainly heading to Florida to support a major cluster of 6-8 launches in Q4 2019.

This marks the first time in nearly four months that a flight-proven Falcon 9 booster has been spotted in transit, excluding a lone (unflown) booster captured on its way to McGregor, Texas last month. This also serves as an opportunity to reexamine the status of SpaceX’s expansive fleet of reusable Falcon 9 Block 5 rockets as the company prepares for a busy end of 2019 in the midst of a rare multi-month lull in launch activities.

Based on the timing, its location (Southern California), and the direction it was headed (Eastbound), the rocket spotted on August 20th is almost certainly twice-flown Falcon 9 booster B1051. The booster was likely departing SpaceX’s Vandenberg Air Force Base (VAFB) launch facilities after some two months post-launch inspections and refurbishment, having completed its second launch and landing on June 12th, 2019 in support of the Radarsat Constellation Mission (RCM).

Prior to its successful launch of RCM, B1051 had the historic privilege of supporting the inaugural orbital launch of SpaceX’s Crew Dragon spacecraft, putting the next-gen crew capsule through its paces before a crewed launch debut expected to occur absolutely no earlier than (NET) December 2019. Known as DM-1 (Demo-1), B1051 was subjected to an exceptionally strenuous suite of inspections, analysis, and testing for the mission – from the very first welding sparks to the booster’s McGregor, TX and Florida static fires and launch debut.

Said debut occurred on March 2nd, 2019, after which B1051 landed at sea aboard drone ship Of Course I Still Love You (OCISLY).

SpaceX production experienced an exceptionally frenetic period from early-2018 to mid-2019, in which the company averaged the completion of almost an entire Falcon 9 or Heavy rocket every 1-2 months, building, delivering, launching, and relaunching Falcon boosters B1046 through B1057 from ~January 2018 to April 2019. In the last 3-4 months, the (publicly visible) rate of rocket production has dramatically slowed, presumably an intentional slow-down triggered by SpaceX’s rapidly growing fleet of flight-proven boosters.

In the last four or so months, unaffiliated observers have spotted a grand total of one new Falcon 9 booster on its way from SpaceX’s Hawthorne, CA factory to its McGregor, TX testing facilities. That booster – likely either B1058 for Crew Dragon’s crewed launch debut (Demo-2) or B1059 for SpaceX’s next USAF GPS III launch – was spotted twice headed east in Arizona on July 29th. Prior to that, the next most recent ‘core spottings’ occurred in mid-to-late April, while the most recent since July 29th’s instance is B1051.2’s August 20th appearance. In short, things are unusually quiet on the SpaceX booster transport front.

This apparent slowdown in production can be relatively easily explained by the nature of SpaceX’s fleet of boosters, as well as the company’s growing confidence in the extreme reusability nominally permitted by Falcon 9’s Block 5 upgrade. Just a few days ago, SpaceX Vice President of Build and Flight Reliability Hans Koenigsmann reiterated the belief that Falcon 9 Block 5 boosters will be more than capable of safely performing 10 or more launches apiece.

At the moment, SpaceX’s fleet of flightworthy Block 5 boosters is seven strong, composed of B1046.3, B1048.3, B1049.3, B1051.2, B1052.2, B1053.2, B1056.2. Altogether, they have supported a full 17 launches in 15 months, averaging 2.4 launches apiece with a maximum of three launches achieved by three separate boosters. Under the extremely conservative assumption that 60-90 days are needed for post-flight inspections and refurbishment, anywhere from 2-6 of those boosters are already ready for their next launches.

In simple terms, it appears that even a fleet as small as seven Falcon 9 Block 5 boosters may be capable of supporting a vast majority of SpaceX’s commercial launch contracts, while even NASA has come to support launching uncrewed Cargo Dragon missions on flight-proven boosters. In fact, Koenigsmann revealed that a number of customers had nearly come a full 180 degrees in the less than three years that SpaceX has been reflying boosters. Many now actively prefer a flight-proven booster and have come to view them as a more known quantity relative to unproven (i.e. new) hardware.

Aside from a handful of customers – primarily the US military – that explicitly demand new hardware, the rare need for entirely expendable Falcon 9 launches, and the equally rare loss of boosters during unsuccessful landings, SpaceX just doesn’t need nearly as high of a Falcon 9 or Heavy booster production rate to support the same (or even greater) launch cadences.