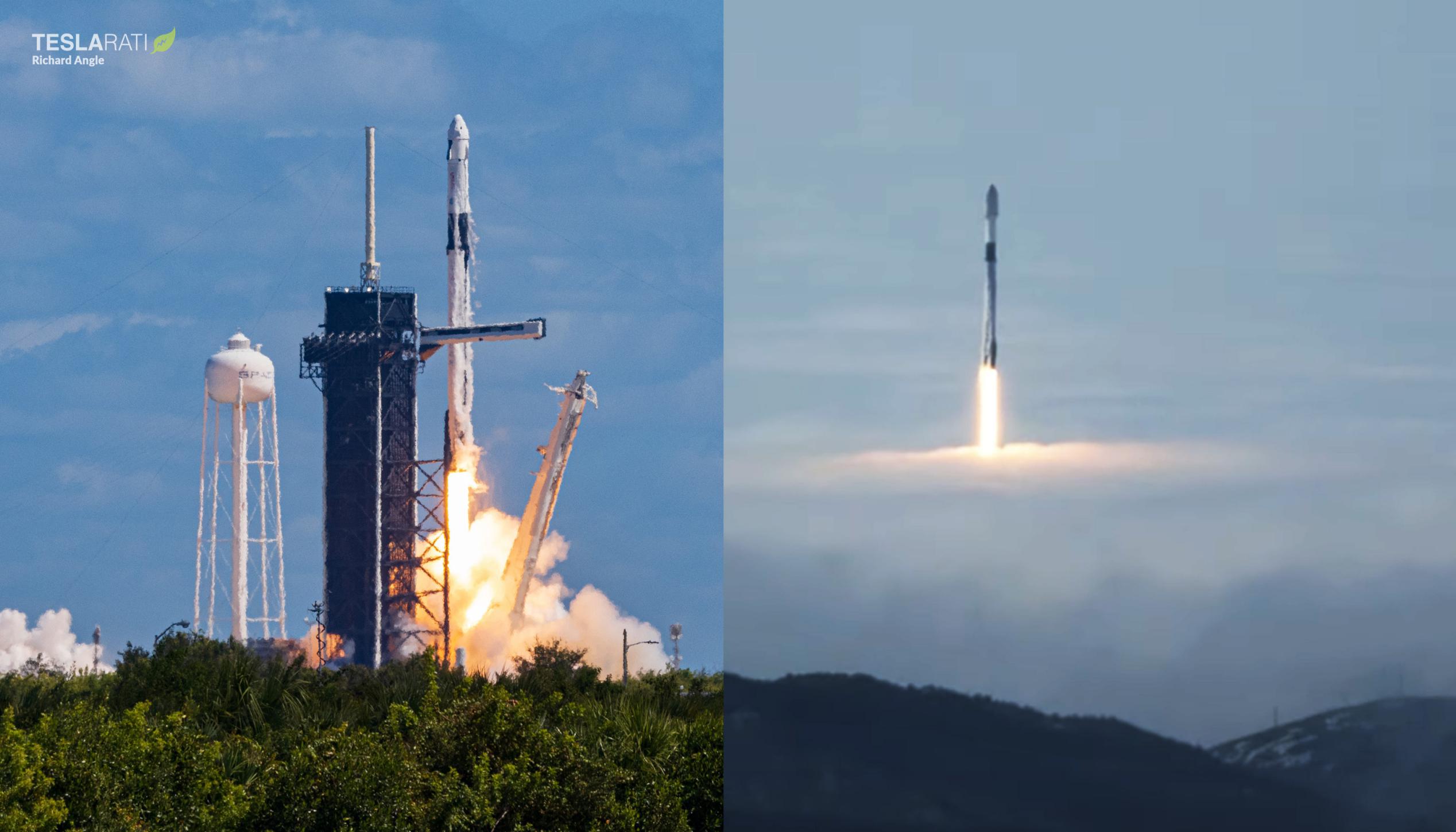 A Falcon 9 rocket on the East Coast kicked things off with a launch out of NASA’s Kennedy Space Center (KSC) LC-39A pad – leased by SpaceX since 2014 – at noon EDT (16:00 UTC). A rare new Falcon 9 booster lifted an expendable upper stage and flight-proven Crew Dragon capsule – carrying four professional astronauts – most of the way free from Earth’s atmosphere before heading back to Earth and landing without issue on a SpaceX drone ship. The upper stage continued to low Earth orbit and deployed Dragon, kicking off a 29-hour journey to the International Space Station (ISS).

Seven hours and ten minutes later, a second Falcon 9 rocket lifted off from SpaceX’s Vandenberg Space Force Base (VSFB) SLC-4E pad, bursting through a thick layer of coastal fog. Following a successful launch and landing of booster B1071 and two good burns of the rocket’s upper stage, Falcon 9 deployed another 52 Starlink V1.5 satellites, adding to the more than 3000 working satellites already in orbit.

And SpaceX isn’t done. As early as 7:07 pm EDT (23:07 UTC) on October 6th, less than 24 hours after Starlink 4-29, a third Falcon 9 rocket is scheduled to launch from SpaceX’s Cape Canaveral Space Force Station (CCSFS) LC-40 pad. Rounding out the trio, the mission will carry Intelsat’s Galaxy 33 and Galaxy 34 communications satellites into a geostationary transfer orbit (GTO).

The mission will be Falcon 9 booster B1060’s 14th launch, significantly raising the bar for the commercial acceptance of reused SpaceX rockets. Prior to Galaxy 33/34, SpaceX’s commercial reuse record was held by Transporter-3, which was Falcon 9 B1058’s tenth launch.

The completion of two Falcon 9 launches in a little over 7 hours nearly halves SpaceX’s previous record of 14 hours and 8 minutes, set by a pair of launches in June 2022. It also demonstrates that the company can repeatedly prepare for and complete multiple Falcon 9 launches in very close proximity – more or less a necessity if it wants to hit CEO Elon Musk’s unprecedented target of “up to 100 launches” in 2023.

It isn’t a record for all of spaceflight, however. That likely falls to the Soviet R-7 family of rockets, 2 of which launched just 25 minutes apart in 1969. However, 3 Falcon 9 launches in 31 hours (Crew-5, Starlink 4-29, and Galaxy 33/34) is likely a record for all rockets. Parsing astrophysicist Jonathan McDowell’s extensive records, the R-7 family likely held the record for decades after completing 3 launches in 40 hours in 1978.

But, as it turns out, SpaceX already beat that record when it launched 3 Falcon 9 rockets in 36 hours in June 2022. 3 Falcon 9 launches in 31 hours thus breaks SpaceX’s record and the world record. That’s become an increasingly common occurrence for a company that has beaten its competitors so thoroughly that, by many measures, it has become peerless. Now, only the records of the former Soviet Union and a retired NASA rocket can outmatch SpaceX, a single 20-year-old company.

In less than three years, SpaceX has launched 30 astronauts: more than twice as many as China but a tiny fraction of the 852 people NASA’s Space Shuttle launched over its 30-year career. SpaceX’s Falcon family of rockets is the most reliable in history after 154 consecutive successes in less than six years, and Falcon boosters have completed more successful landings (145) than Space Shuttle orbiters. But its Dragon spacecraft will likely never best the Soviet and Russian Soyuz capsule and its variants, and Falcon will almost certainly be retired before it can come close to the R-7 rocket family’s extraordinary record of 1844 launches over 65 years.

But in the modern era, SpaceX is simply unmatched.