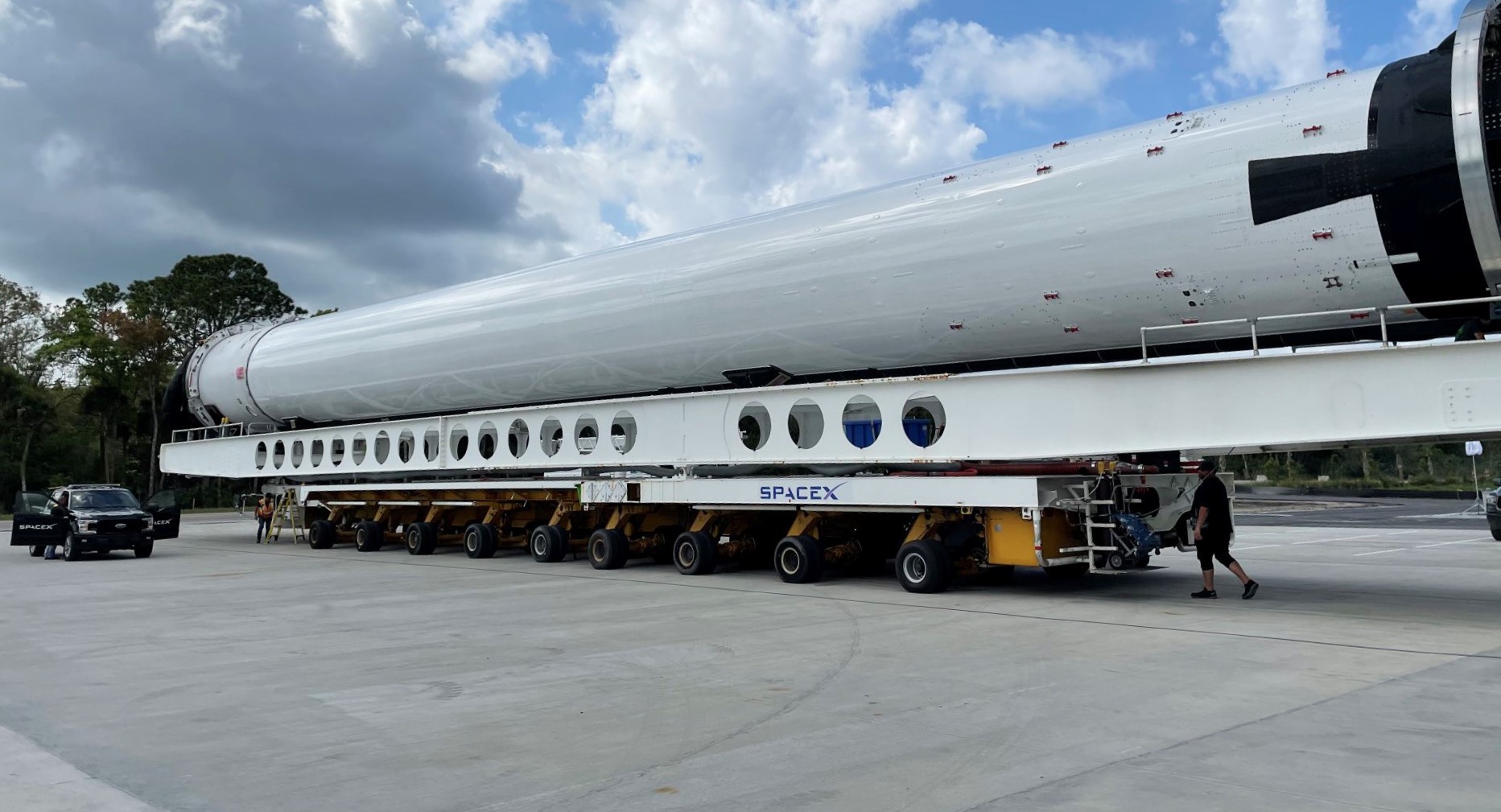 SpaceX has been spotted transporting a Falcon Heavy booster through NASA’s Kennedy Space Center (KSC) facilities, offering a slight glimpse behind the scenes amid a seemingly unending series of launch delays for the most powerful operational rocket in the world.

Regardless, the new Falcon Heavy center core moved to HangarX on March 9th, 2022 was missing at least a few essential parts, suggesting that it could merely be headed there to be fully outfitted for an upcoming launch. However, it could also have been moved to HangarX for longer-term storage after waiting too long at a satellite storage facility. Due to seemingly unrelenting delays impacting at least three of several Falcon Heavy launches planned in 2022, SpaceX has been stuck shuffling more and more Falcon Heavy cores over the last six or so months.

As of September 2021, all three new Falcon Heavy cores meant to support USSF-44 – set to be the rocket’s first launch in more than two years – were already inside the integration hangar at Pad 39A, the only launch site able to support Falcon Heavy. Originally meant to launch in late 2020, both USSF-44 and USSF-52 have been more or less indefinitely delayed ever since. In September, USSF-44 – one or several geostationary US military satellites – was expected to launch as early as October 2021. Soon after, the launch was delayed to “early 2022.” As of March 2022, the US military now refuses to offer even a vague public estimate for the mission’s latest launch target.

Combined with a series of either two or three Dragon launches – all of which need Pad 39A – planned as early as late March, mid-April, and early May, it’s now all but guaranteed that Falcon Heavy will have to wait until May or June 2022 for its first launch since June 2019 – a staggering three-year gap. Due to those delays, SpaceX is currently juggling an unprecedented fleet of six (soon to be seven) unflown, ready-for-flight Falcon Heavy boosters on top of another dozen flight-proven Falcon 9 and Heavy boosters.

On top of the military’s USSF-44 and USSF-52 missions, both of which are now years behind schedule, satellite communications provider ViaSat also recently announced the latest in a long line of ViaSat-3 launch delays, pushing its Falcon Heavy launch from this spring to no earlier than “late summer” – i.e. late Q3 2022. Ironically, of Falcon Heavy’s near-term missions, only NASA’s Psyche spacecraft – designed to orbit and explore an exotic asteroid tens to hundreds of millions of miles from Earth – has survived the last year or two without a major launch delay. It remains on track to launch in August 2022.

In fact, given that there is apparently so much uncertainty surrounding USSF-44 and USSF-52 that the US military is no longer willing to offer any public schedule estimate, it’s starting to look likely that Psyche – barring its own delays – could launch before USSF-44, USSF-52, and ViaSat-3. If that’s the case, SpaceX has almost half a year to prepare for the launch and it would only make sense to move all Falcon Heavy cores to longer-term storage until schedule confidence improves.

Unfortunately, that means that until there are signs of tangible preparations or actual military payloads arriving at Cape Canaveral, it’s very likely that SpaceX will have to wait until August 2022 at the earliest for Falcon Heavy’s first launch in more than three years.