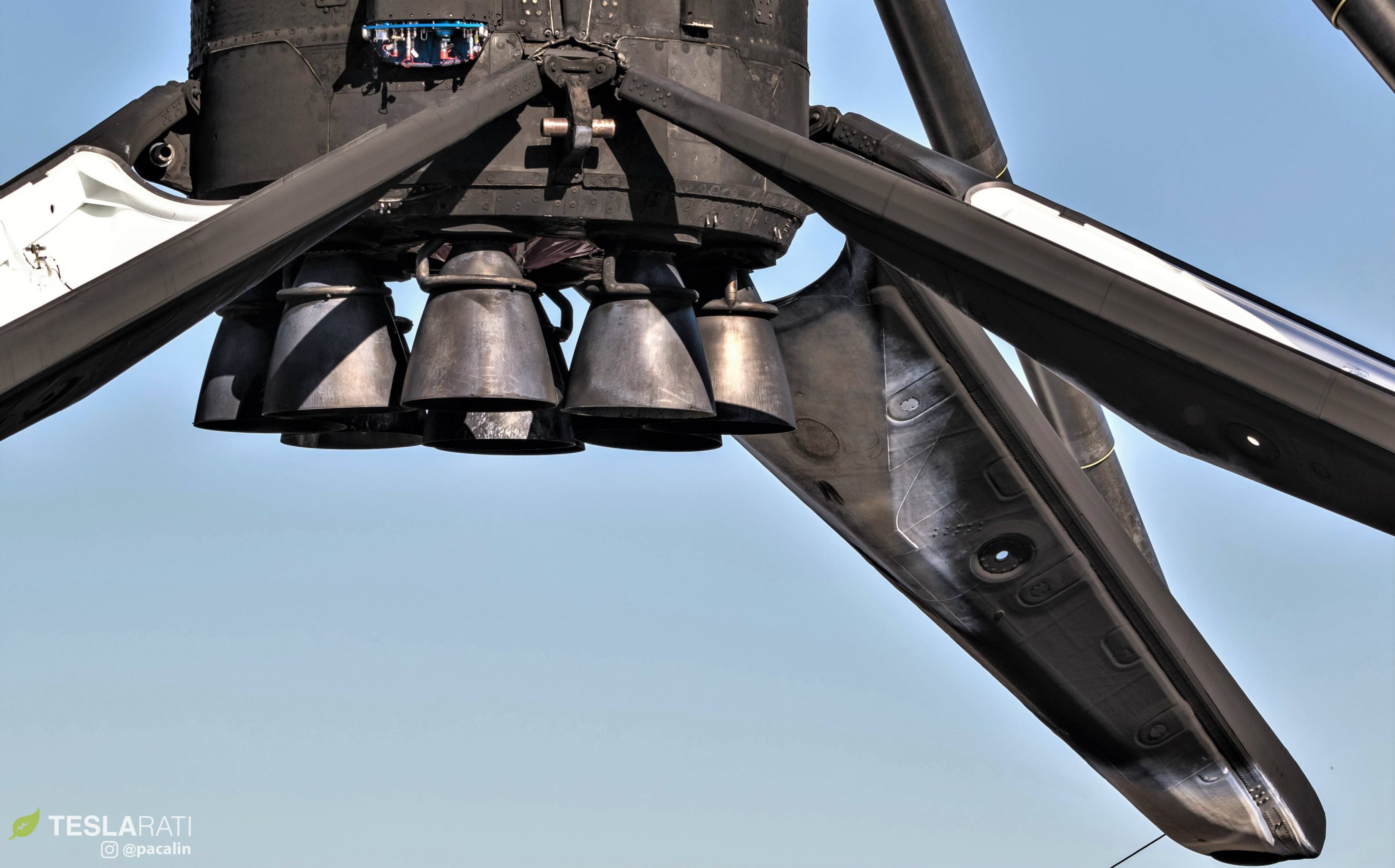 Falcon 9 B1046.3 is lifted off of drone ship Just Read The Instructions after arriving in Port of LA. (Pauline Acalin)

SpaceX has completed what might be its most important Falcon 9 reuse yet after successfully launching and recovering booster B1046 for the third time in just six months. Prior to this launch, the company had never before flown a reused Falcon 9 booster more than once.

Making way for a probable fourth launch in the near future, B1046’s Port of Los Angeles return was marked by a stream of spectacular visuals as seasoned SpaceX recovery technicians transferred the booster from drone ship to land, performed initial inspections, and prepared it for transport back to Hawthorne, where it will undergo (hopefully minimal) refurbishment.

Falcon 9 B1046.3 went horizontal this afternoon after spending 6 days at port of LA. #spacex @Teslarati pic.twitter.com/QqTpMFvl0F

Displaying inspiring dedication, Teslarati photographer Pauline Acalin managed to stick with B1046 for a major portion of the six days it spent on the docks, despite a rare spate of rainy and downright stormy days in Los Angeles. Her patience was awarded with a number of beautiful photos documenting nearly every significant aspect of any given Falcon 9 booster recovery, ranging from the lift from drone ship to dockside and the removal of all four titanium grid fins to the rocket’s flip from a vertical to a horizontal orientation ahead of road transport back to SpaceX’s Hawthorne factory.

Above all else, the most noteworthy aspect of Falcon 9 B1046’s third return to port is just how unharmed the rocket appears, at least from an external perspective. The booster has grown a fairly healthy triple coating of kerosene soot from its three reentry and landing burns, thick enough that Falcon 9’s mirror-shiny white skin is barely visible on the lower (RP-1) propellant tank. At this point, it seems that SpaceX has concluded that any possible performance loss from those soot layers are small enough to be negligible. 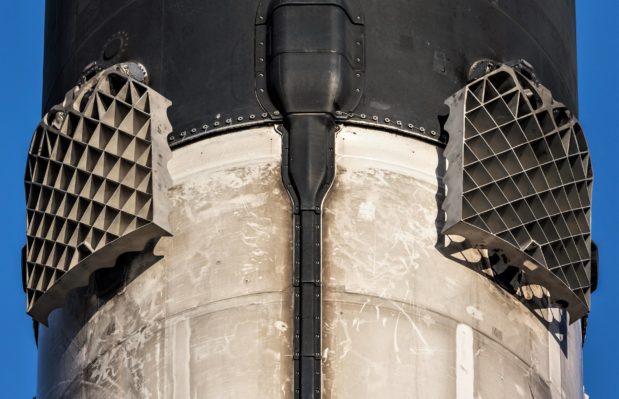 Falcon 9 B1046 stands proud and sooty after its third successful launch. (Pauline Acalin) 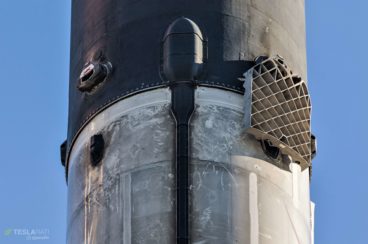 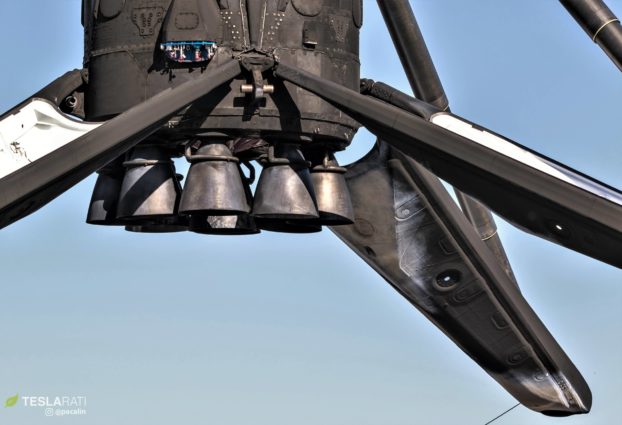 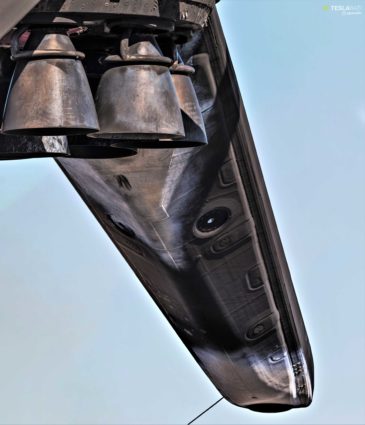 It’s unclear what exactly causes it, but Falcon 9 Block 5’s newly heat-shielded legs turn a rather bright white after being scorched during booster landings. (Pauline Acalin)

In an operational sense, SpaceX’s Falcon 9 recovery procedures and the technicians that perform the actual task of recovery seem to be approaching the work with an attitude that fits better in the realm of commercial aviation than in what is perceived as modern rocketry (clean rooms, surgical precision, etc.). Both the procedures and technicians seem to have been refined into what now runs like a well-oiled machine, wrapping up the complex and pathfinding task of recovering a thrice-flown Falcon 9 booster in less than a week from its drone ship landing to Hawthorne arrival.

The condition of B1046 could well make or break the future of the Falcon 9 family, as any significant departure from Block 5’s design intentions could cut the operational lifetime of the ~10 boosters already produced by dozens of fleet-wide flights. 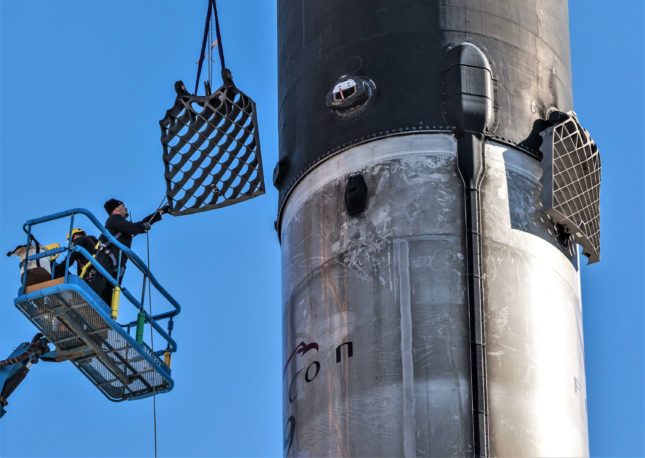 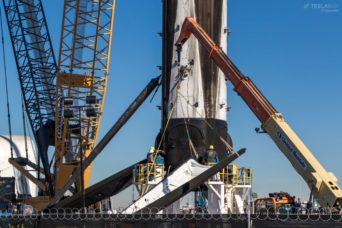 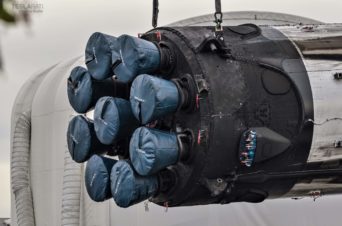 With any luck, B1046’s nine Merlin 1D engines may well see another orbital-class launch in the near future. (Pauline Acalin) 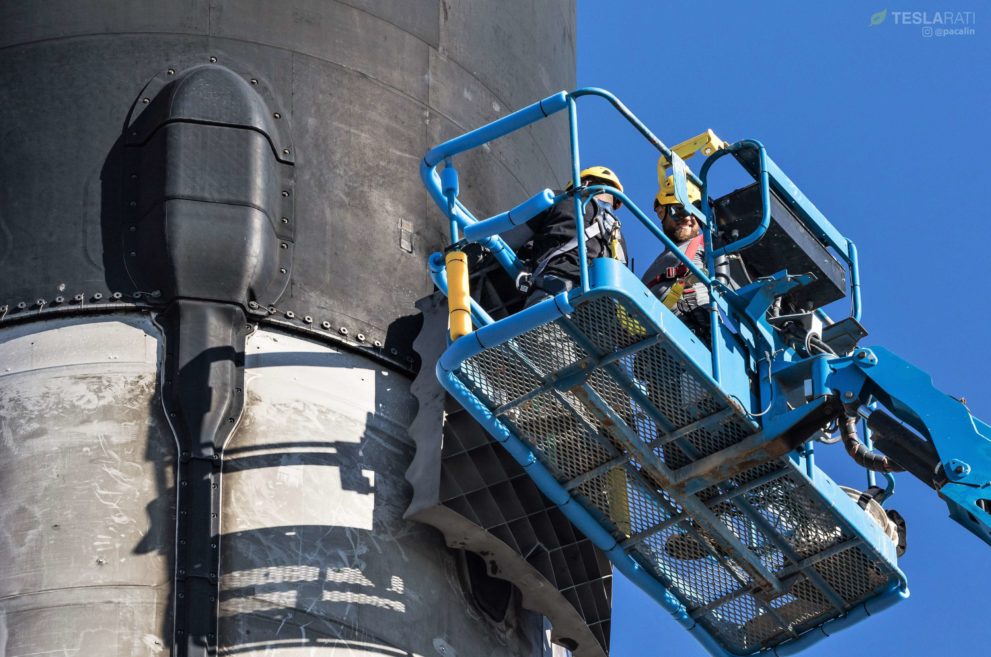 On the other hand, a rapid and relatively painless post-recovery inspection and a general bill of nominal health could – pending customer comfort and SpaceX pricing it right – open the floodgates for the company’s fleet of (optimally) reusable rocket boosters. Even if it turns on that Falcon 9 Block 5 boosters almost invariably demand $10M+ in extensive refurbishment after every launch and can only manage a max of 10 launches before heading to the scrapyard, SpaceX could quite literally become untouchable on the global launch market and remain so for a minimum of 5+ years.

First grid fin has been removed from the 3x flown Falcon 9 standing at port of LA. Been wanting to see this happen for years. So NEAT! #spacex @Teslarati pic.twitter.com/iICf7Pypn8

So long as the company can preserve the Falcon family’s impressive and ever-growing heritage of reliability alongside industry-leading reusability, there isn’t a company or country in the world that could beat SpaceX’s business model if it ever came down to a contract competition death-match, so to speak, not for another 5-10 years. It may never come to that, but that capability will – at the bare minimum – give SpaceX a nearly unbeatable upper hand for launching its own global constellation of internet satellites, known as Starlink.