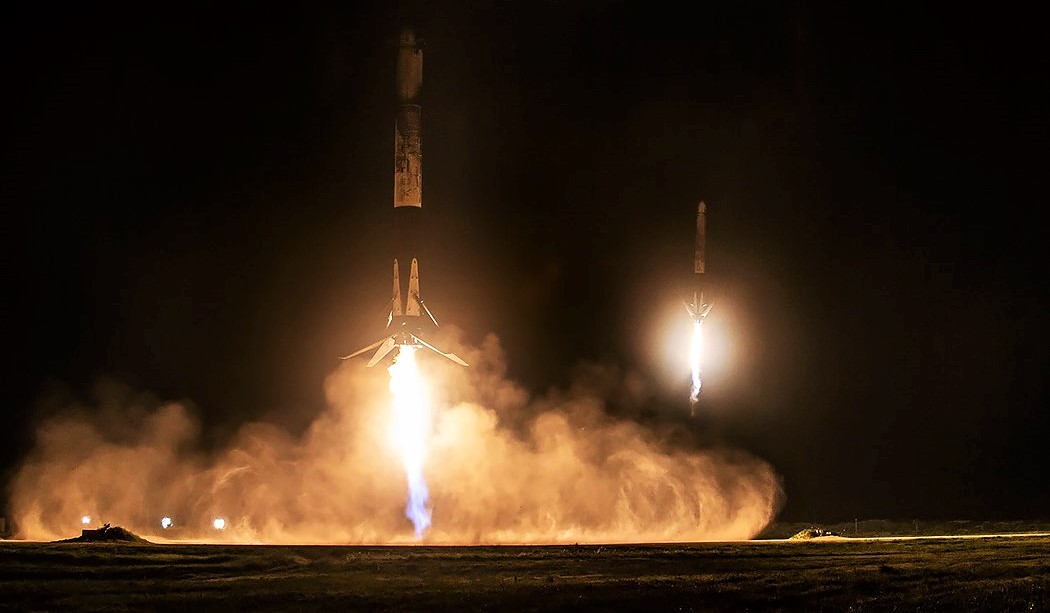 Falcon Heavy launched for the third time ever on June 25th, successfully recovering 2 of 3 boosters and placing 24 satellites in their proper orbits. Falcon Heavy Flight 4 could be more than 16 months away. (SpaceX)

According to comments made by US Air Force officials prior to SpaceX’s latest Falcon Heavy launch, the payload assigned to the military’s first fully-certified Falcon Heavy has been swapped with another, although the mission’s late-2020 launch target remains relatively unchanged.

This new information comes on the heels of the June 25th launch of Space Test Program 2 (STP-2), SpaceX’s third successful Falcon Heavy mission and a huge milestone for the rocket’s future as a competitive option for US military launches. Perhaps most importantly, it confirms – barring a surprise launch contract or internal Starlink mission – that Falcon Heavy’s next (and fourth) launch is unlikely to occur until late next year, a gap of at least 15-17 months.

Announced roughly four months after Falcon Heavy’s inaugural February 2018 launch debut, the USAF contracted with SpaceX to launch the ~6350 kg (14,000 lb) AFSPC-52 satellite no earlier than (NET) September 2020. In February 2019, Department of Defense contract announcements revealed that SpaceX had been awarded three military launch contracts, two for the National Reconnaissance Office (NROL-85 & NROL-87) and one for the USAF (AFSPC-44), all tentatively scheduled to launch in 2021.

First reported by Spaceflight Now, Col. Robert Bongiovi – director of the launch enterprise systems directorate at the Air Force’s Space and Missile Systems Center (AFSMC) – recently indicated that AFSPC-44 – not AFSPC-52 – is now scheduled to be the US military’s first post-certification Falcon Heavy launch. 52 and 44 have essentially swapped spots, with AFSPC-44 moving forward to NET Q4 (fall) 2020 while AFSPC-52 has been delayed to NET Q2 (spring) 2021.

The trouble with launch gaps

Although Bongiovi did not explicitly state that AFSPC-44 will be SpaceX’s next Falcon Heavy launch, there are no publicly-disclosed missions set to launch on the rocket in the interim. That could theoretically change, especially if SpaceX has plans to launch the massive rocket in support of an internal Starlink mission or even something more exotic, but the loss of both Block 5 center core B1055 and B1057 means that the company will have to build an entirely new center core.

SpaceX’s Falcon Heavy lead times are far superior to competitor ULA’s Delta IV Heavy production line, but the process of manufacturing new center cores is still quite lengthy. Critically, Falcon Heavy Block 5 center cores require strengthened octawebs, custom interstages, and propellant tanks that are significantly thicker than those used on Falcon 9. For all intents and purposes, a center core is a totally different rocket relative to a Falcon 9 booster, the latter being SpaceX’s primary focus at the company’s assembly line-style Hawthorne factory. It’s theoretically possible for a dedicated Falcon Heavy center core build to be expedited or leapfrogged forward in the production queue, but most long-lead Falcon 9 booster hardware physically cannot be redirected to speed up center core production.

Unless SpaceX was already in the process of building a new center core prior B1057’s unsuccessful landing attempt, it’s safe to assume that the next custom Falcon Heavy booster is unlikely to be completed until early 2020, if not later. In theory, this means that Falcon Heavy could be dormant for no less than 16 months between STP-2 and its next launch. Traditionally, that sort of lengthy gap between launches has been frowned upon by NASA, ULA, and oversight groups like GAO. If a given rocket doesn’t launch for a year or more, it can potentially pose a risk to reliability and raise costs as its production and launch teams have no satisfactory way to fully preserve their technical expertise.

This can be compared to attempting to become an expert at a musical instrument while only having access to said instrument one or two months a year, essentially impossible. In fact, at one point, NASA hoped to require its Space Launch System (SLS) rocket be able to launch no less than once per year, partly motivated by a desire to mitigate some of the deterioration that can follow extremely low launch cadences. Years later, financial constraints and years upon years of delays and budget overruns have made such a cadence effectively impossible for SLS/Orion, but the fact remains that launching a rocket just once every 18-24 months is likely to inflate both costs and risks.

Thankfully, SpaceX’s Falcon Heavy could scarcely be more different than NASA’s SLS and the retired Space Shuttle it derives most of its hardware from. Even if all things are held equal and not flying a Falcon Heavy center core for 16+ months increases risk and cost, center cores are still heavily derived from Falcon 9 booster technology, including plumbing, avionics, attitude control thrusters, Merlin 1D engines, landing legs, and launch facilities.

Furthermore, the center core is just one of five distinct assemblies that make up a given Falcon Heavy. Both side boosters are effectively Falcon 9 Block 5 boosters with nose cones instead of interstages and slight modifications to support booster attachment hardware, while the upper stage and payload fairing are the same for all Falcon launches. In other words, SpaceX’s workforce will continue to build, launch, land, and reuse dozens of Falcon 9 boosters – as well as upper stages payload fairings – between now and Falcon Heavy Flight 4, even if it’s NET Q4 2020. In a worst-case scenario, SpaceX production and launch staff will be unfamiliar and inexperienced with maybe 20% of Falcon Heavy – at least in a very rough sense. Even then, much of that unfamiliarity may still be tempered by the fact that Falcon Heavy center cores share a large amount of commonality with the Falcon 9 first stages SpaceX’s workforce will remain deeply familiar with.

Indeed, Falcon Heavy’s second launch has already demonstrated this to some extent, occurring without issue more than 14 months after the rocket’s inaugural launch. It seems that the only real loss incurred by a ~16-month delay between Flights 3 and 4 will be having to wait another year (or more) to witness Falcon Heavy’s next launch.