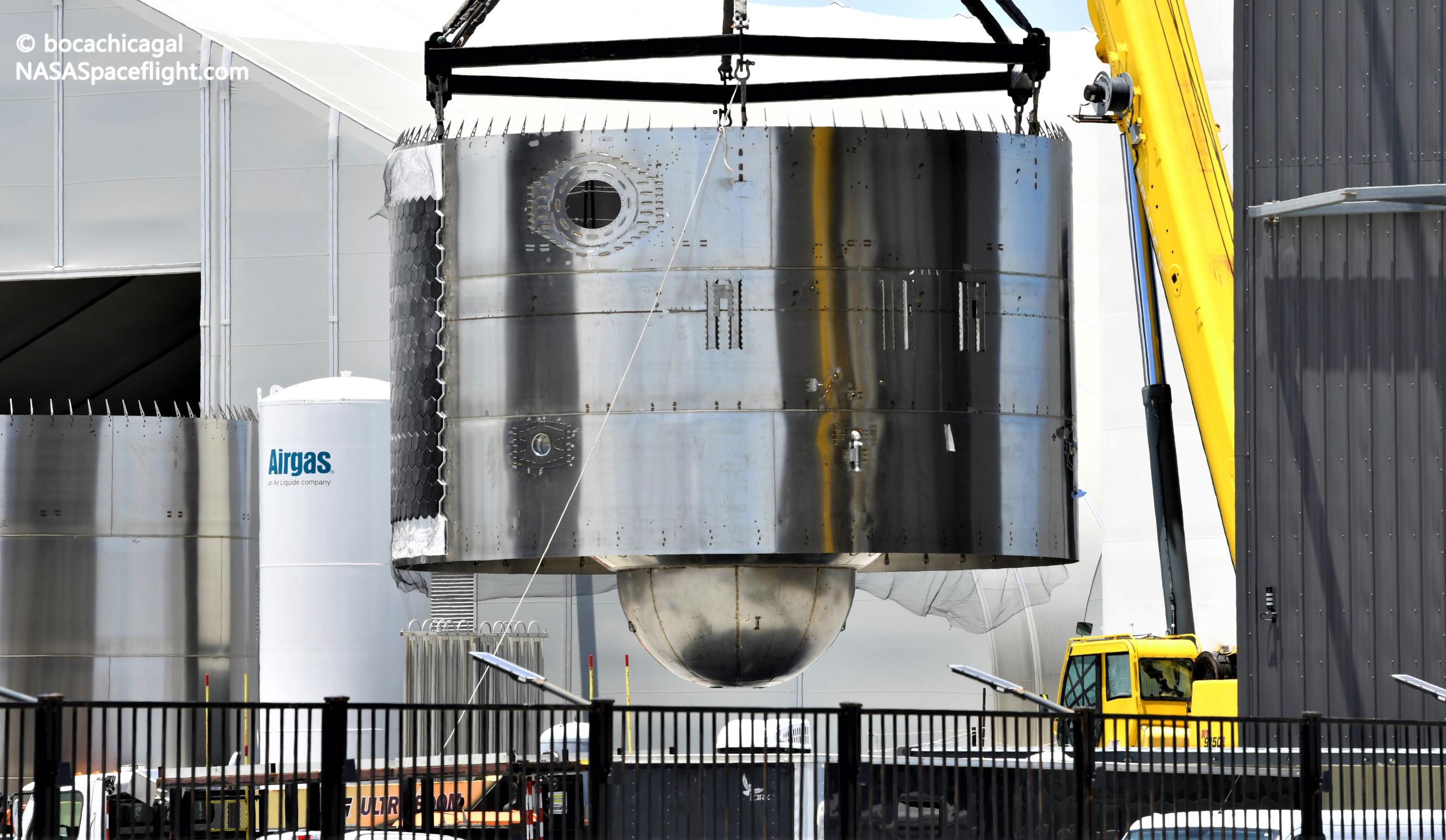 SpaceX has begun rapidly assembling the first orbital Starship prototype and the Super Heavy booster set to launch it isn’t far behind.

SpaceX’s Boca Chica, Texas rocket factory seemingly turned a corner in early July as sections of Starship 20 (S20) began to pop up around the site. Though parts labeled Starship “SN20” first appeared as far back as March 2021, the only unequivocal work on SpaceX’s first purportedly orbital-class Starship began in mid-June with the integration of the first engine section with mounts for six – not three – Raptors.

However, in line with SpaceX’s strict focus on maximizing the speed of Starship development and shortening the path to orbit, the company has frequently built Starship hardware before firmly assigning that hardware to any given ship, booster, or tank. In other words, until SpaceX actually begins stacking multiple completed rocket sections, there’s always a degree of uncertainty about the fate of any given ring, dome, or tank barrel. With Starship S20, that process began earlier this month and Super Heavy Booster 4 is likely to follow suit within the next few days – if it hasn’t already.

Since SpaceX unceremoniously rolled Starship prototype SN16 to an empty lot in mid-May, the company didn’t stack a single Starship part until the first week of July – unusual after a frenetic seven months spent building, qualifying, and launching Starships SN8, SN9, SN10, SN11, and SN15 and testing test tanks SN7.2 and BN2.1. Around the same time as Starship SN15 became the first prototype to successfully complete a high-altitude test flight and land in one piece, news broke that SpaceX was striving to perform Starship’s first orbital test flight with Ship 20 (S20) and Booster 3 (B3) as early as July.

Eventually, Booster 3’s orbital launch assignment shifted to Booster 4 as it became clear that the former prototype wasn’t meant to fly, but Starship S20 remained. More likely than not, the almost two-month gap between Starship SN16’s instant retirement and the start of the next flightworthy prototype’s assembly can be explained by the significant changes, upgrades, and undecided design decisions required to jump to S20.

Beyond the need for a thrust structure capable of supporting three sea-level Raptors and three vacuum-optimized engines, Starship S20 would need a full heat shield with thousands of tiles; orbital-class communications and avionics; and the general polished fit and finish required for an orbital launch attempt to have a good shot at producing the data needed for it to be valuable. SpaceX appeared to conclude that those stars were aligned in early July.

Two weeks after the first stack, Starship S20 is already approximately half-assembled and the last section of the vehicle’s tanks is almost ready for installation. What could be Starship S20’s nosecone is also in the late stages of assembly, though SpaceX has yet to even attempt to fully cover a nose in heat shield tiles and getting that process right could take an attempt or two.

Meanwhile, as evidenced by the booster common dome section hanging in midair in the image above, the assembly of Super Heavy booster 4 (B4) – the same booster tasked with supporting Starship’s first orbital launch attempt – may have begun on July 15th. If the Super Heavy common dome assembly was simply being moved relocated, a separate four-ring section has been staged outside of the high bay to kick off Booster 4 stacking within the next few days.

All told, it’s not inconceivable that both of the first orbital-class Starship and Super Heavy prototypes will be fully assembled and ready for testing – integrated or otherwise – sometime in August.