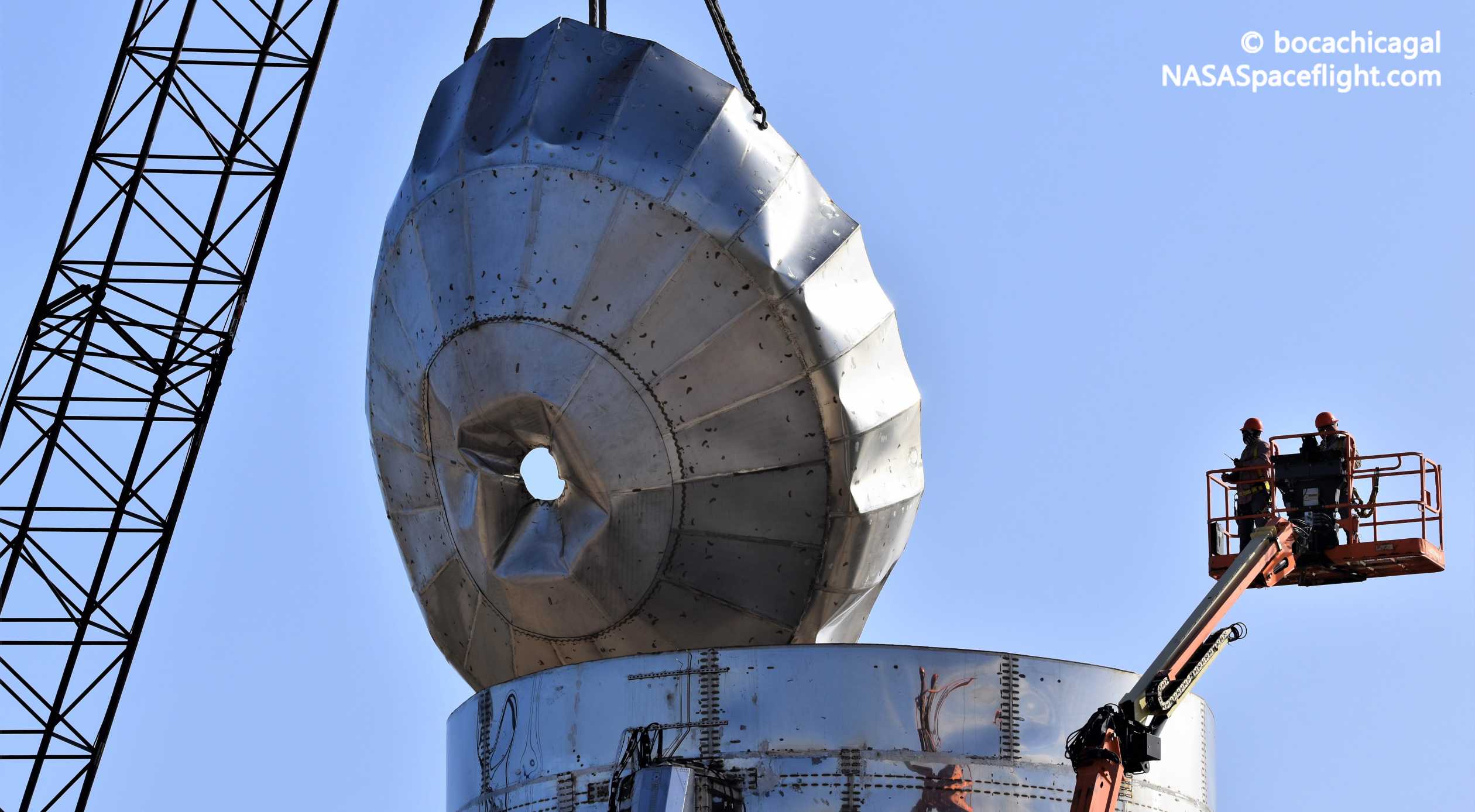 A bit less than a month after SpaceX’s first full-scale Starship prototype was partially destroyed during testing, the damaged rocket has been almost completely scrapped to make way for new and improved Starships.

On November 20th, SpaceX effectively tested the Starship Mk1 – the first full-scale prototype – to destruction, pressurizing the rocket’s tank section (lower half) until it quite literally popped its top. The pressure wave that failure created damaged almost every internal component of the massive vehicle, all but guaranteeing that SpaceX would have to scrap the vehicle and move on to new prototypes.

Those future prototypes will take advantage of the many, many lessons learned from Starhopper’s two test flights and several additional grounded tests, as well as the many learning experiences presented through Starship Mk1’s pathfinder manufacturing, assembly, and test campaign. As is SpaceX’s signature, the company is choosing to learn by building actual hardware and making the inevitable mistakes that come hand in hand with such an eccentric and ambitious program.

Above all else, SpaceX is trying to redefine the minimum infrastructure needed to build high-performance launch vehicles at a scale comparable to or even larger than NASA’s Saturn V, the largest rocket ever successfully launched. Modern rockets like Falcon 9 and Atlas V are built in relatively clean and environmentally-controlled environments and Saturn I and V – while quite a bit less sterile – were at least built inside large hangar-like facilities.

With Starship, SpaceX instead wants to build rockets even larger than Saturn V out in the elements and with a far more common (and thus affordable) workforce, (theoretically) made possible in large part thanks to its extensive use of stainless steel. Case in point, Starhopper – a low-fidelity Starship test bed – was quite literally welded together on the South Texas coast by welders far more familiar with building water towers. While not without its teething pains, Starhopper proved to be incredibly sturdy and resistant to anomalous behavior and successfully performed two separate flight tests in July and August 2019.

Three months after Starhopper’s second and final hop test, SpaceX’s Starship Mk1 tank section – the lower half of the rocket – was moved to the launch site and began a series of tanking tests. The first few tests were completed successfully and focused on searching for leaks with a neutral cryogenic liquid (likely liquid nitrogen). After the majority of those leaks were sealed, SpaceX moved into liquid oxygen load testing a few days later. For unconfirmed reasons, it turned out that that first liquid oxygen pressure test would also be Starship Mk1’s last.

On November 20th, SpaceX pressurized Starship Mk1 to its limits, with almost all of the visible creases and wrinkles in its steel surface visibly smoothing out as the supercool liquid oxygen caused frost to form on the exterior. Ultimately, SpaceX pushed the vehicle beyond its limits and its uppermost tank dome quite literally popped off of Starship’s tank section, whether the overpressure event was intentional or unexpected. The force of that overpressure event essentially sent a shockwave through Starship, crushing and warping its two remaining tank domes and transfer tubes like an aluminum soda can.

In simpler terms, very few parts of Starship Mk1 escaped unharmed, all but guaranteeing that it would not be worth the effort to repair it. Instead, SpaceX has almost entirely scrapped the prototype over a period of two weeks. According to an official statement released shortly after Mk1’s failure, SpaceX will attempt to recover and reuse as much of Mk1 as it can and those few salvageable parts will be added to an entirely new prototype, deemed Starship Mk3.

Although it’s disappointing that Starship Mk1 was unable to perform any kind of Raptor engine testing, let alone flight tests, it’s safe to say that the pathfinder prototype has been well worth the time and effort it took to build. Regardless of flight or engine testing, a ton of Mk1’s value lies in its utility as a hands-on, physical testbed for SpaceX employees to perform experiments and learn how to build steel rockets – and build them outside in less than friendly weather conditions.

SpaceX is in the midst of rapidly expanding its presence in Boca Chica, Texas, including a new launch control center, an expanded landing and launch pad, new production facilities, and more. The company has also just begun churning out numerous monolithic (single-weld) steel rings that will likely become part of Starship Mk3 in the near future. It will likely be several months before that next-generation prototype is as close to completion as Starship Mk1 was, but it should be well worth the wait and well worth its predecessor’s sacrifice.