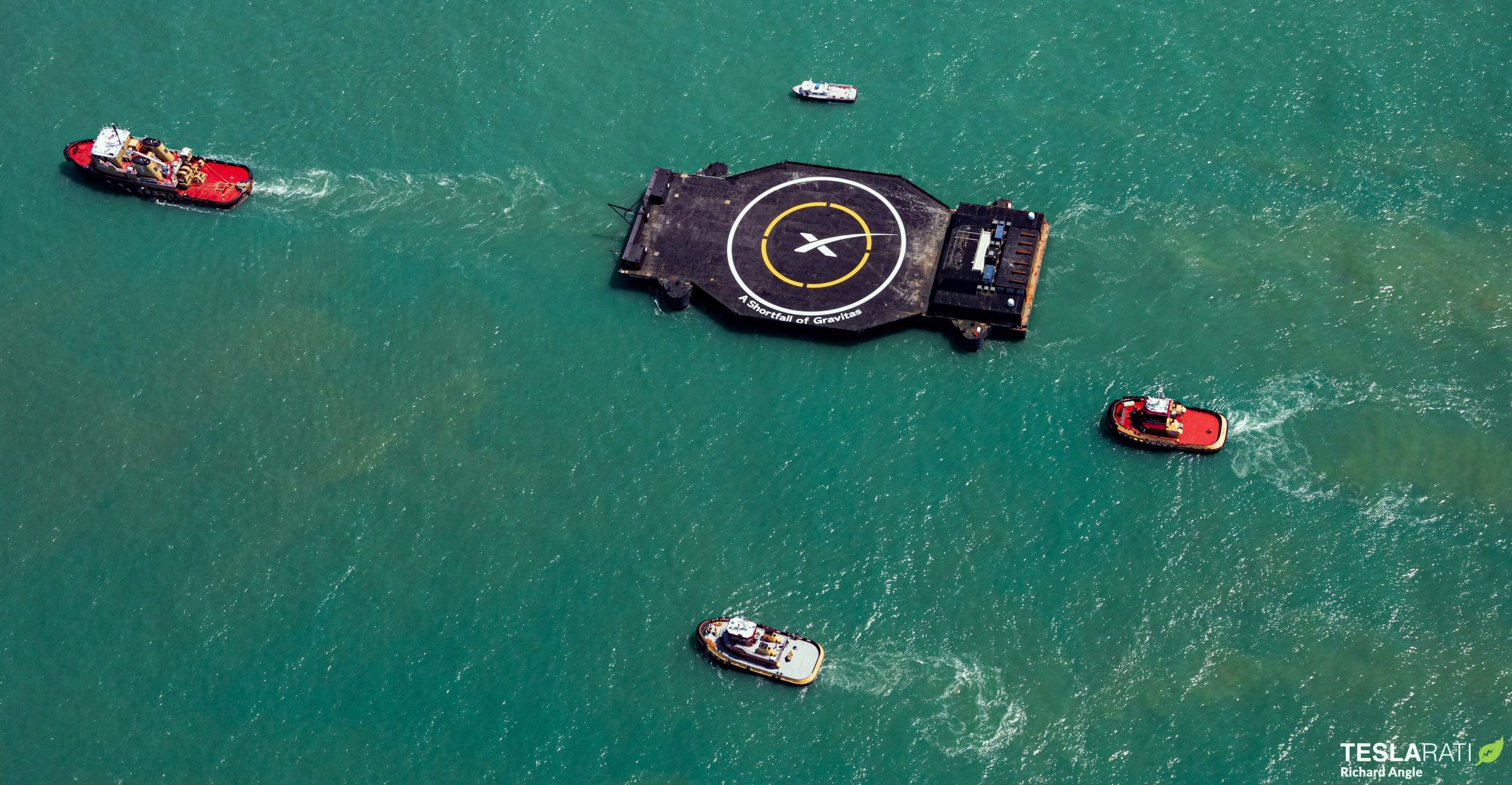 In preparation for SpaceX’s next launch, drone ship A Shortfall Of Gravitas (ASOG) was spotted departing Port Canaveral in the middle of the company’s second Falcon 9 launch and landing this month.

Rideshare mission Transporter-3 lifted off at 10:25 am EST on Thursday, January 13th and delivered 105 small satellites to orbit without issue, completing the second of five SpaceX launches planned for the first month of 2022. Thanks to its relatively light payload, the mission’s Falcon 9 booster was able to boost all the way back to Cape Canaveral for its landing. Ten minutes before Falcon 9 lifted off, SpaceX drone ship ASOG left its Port Canaveral berth, timing its departure such that the vessel was towed past fans and media members there to watch Transporter-3 a matter of seconds after Falcon 9 B1058 stuck its tenth landing just six miles (9.5 km) to the north.

The day before Transporter-3, FAA and Coast Guard notices revealed that SpaceX was aiming to launch its third mission of the month on the evening of Monday, January 17th. Launch photographer Ben Cooper backed up those notices soon after, confirming SpaceX’s plans to launch another batch of Starlink satellites (likely Group 4-6) no earlier than (NET) 7:26 pm EST. Starlink 4-6 will likely mirror 4-5 and carry ~49 Starlink V1.5 satellites to low Earth orbit, using an odd slightly southeastern trajectory to allow both the booster and payload fairing to land near the Bahamas.

During SpaceX’s Starlink 4-5 webcast, an engineer standing in as its host revealed that the purpose of its unusual trajectory and inefficient dogleg maneuver was to increase the odds of successful booster and fairing recovery by landing in a region of the sea that tends to be calmer in the winter. The tradeoff: to get there, Falcon 9 has to perform a slight dogleg maneuver (a bit like a mid-flight right turn), consuming more propellant and thus forcing SpaceX to remove 4 Starlink satellites from the nominal payload of 53. That increases the relative cost of each southerly Starlink launch by about 8% – an inefficiency that SpaceX clearly views as preferable to the risk of losing a Falcon 9 booster (worth $30-40M) or fairing ($2-3M per half) to the ocean.

Much like the first shell of SpaceX’s first 4408-satellite Starlink constellation, which SpaceX mostly completed last year, “Group 4” refers to an almost identical shell of 1584 satellites that will operate at a slightly (0.3%) different inclination and slightly (10 km; 2%) lower orbit. With 49-53 satellites on each mission, it will take SpaceX another 26-29 Falcon 9 launches to complete the new shell if every satellite works as planned.

If, as SpaceX’s plans for January suggest, the company’s Starlink V1.5 output has recovered to Starlink V1.0 levels (120-180+ satellites per month) after a five to six-month drought in H2 2021, SpaceX could more or less complete Shell 4 by the end of 2022 if it can average two Starlink launches per month for the rest of the year. January 2022 bodes well for that prospect, as SpaceX intends to conduct a third Starlink launch (4-7) near the end of the month if it can launch Starlink 4-6 and Italian Earth observation satellite CSG-2 within a few days of January 17th and January 27th.