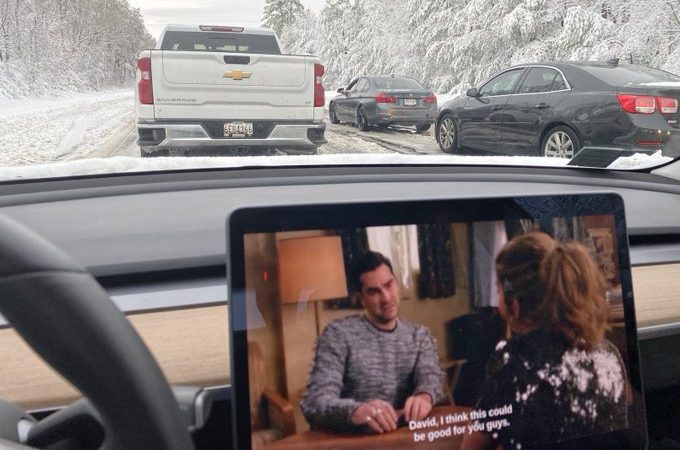 Dan Kanninen, an electric vehicle driver and former White House liaison at the Environmental Protection Agency, recently shared his personal experience during the I-95 traffic catastrophe, which resulted in about 48 miles of the interstate being closed due to ice and snow. Drivers who were caught in the middle of the nightmare traffic scenario had to survive numerous hours in their vehicles in below-freezing temperatures.

In the aftermath of the incident, The Washington Post published an opinion piece alleging that the catastrophe would have been far worse if every vehicle in the traffic jam were electric. Citing a post shared on Twitter about a concerned Tesla driver who knocked on a truck driver’s door in the middle of the night (a follow-up post from the driver on Twitter confirmed that the Tesla driver actually survived the night with 18% of the vehicle’s battery remaining), The Post’s Charles Lane argued that electric vehicles “might have littered the highway for miles” if there were more battery-powered cars involved.

The former White House liaison could not disagree more, and he would definitely know since he was personally trapped in the I-95 for fourteen whole hours during the gridlock. Interestingly enough, Kanninen drives a base Tesla Model 3, the company’s shortest-range car available today. Yet despite these, and contrary to the estimates of The Post, the Model 3 actually handled the frigid night competently. An image shared in a blog post by Kanninen even included an image showing the EV owner watching what appeared to be Netflix in his Model 3’s 15″ display while waiting for the gridlock to end.

Kanninen listed several factors that helped him and his Model 3 handle the I-95 catastrophe without much issue. “I am grateful that I was driving my standard-range Tesla Model 3 when I hit traffic. While fellow drivers ran their engines to stay warm, my EV directed power solely to temperature regulation. As other drivers then fretted about their dwindling gas reserves, my EV continuously monitored my power supply. Because EV drivers charge at home and in the community, we are less likely to have just a partial charge, unlike other drivers, who rarely drive on a full tank,” he wrote.

The Model 3 owner left the I-95 traffic nightmare without any drama, with the vehicle’s navigation directing Kanninen to a nearby charging station when the roads opened up. The former White House liaison added that his car still had 50 miles of range left by the time he reached the EV charging location. Meanwhile, drivers of vehicles powered by an internal combustion engine could be seen waiting in long lines at gas stations, who were overwhelmed and snowed in themselves.

The fact that a lot of misinformed takes about electric cars were published following the I-95 traffic catastrophe proves that there is still a lot that must be done to inform and educate the public about electric cars. If The Washington Post could make a completely erroneous take about how electric cars could handle an overnight gridlock in the middle of winter, after all, then it would suggest that electric cars’ real capabilities and advantages over ICE vehicles are still largely unfamiliar with the mainstream audience.