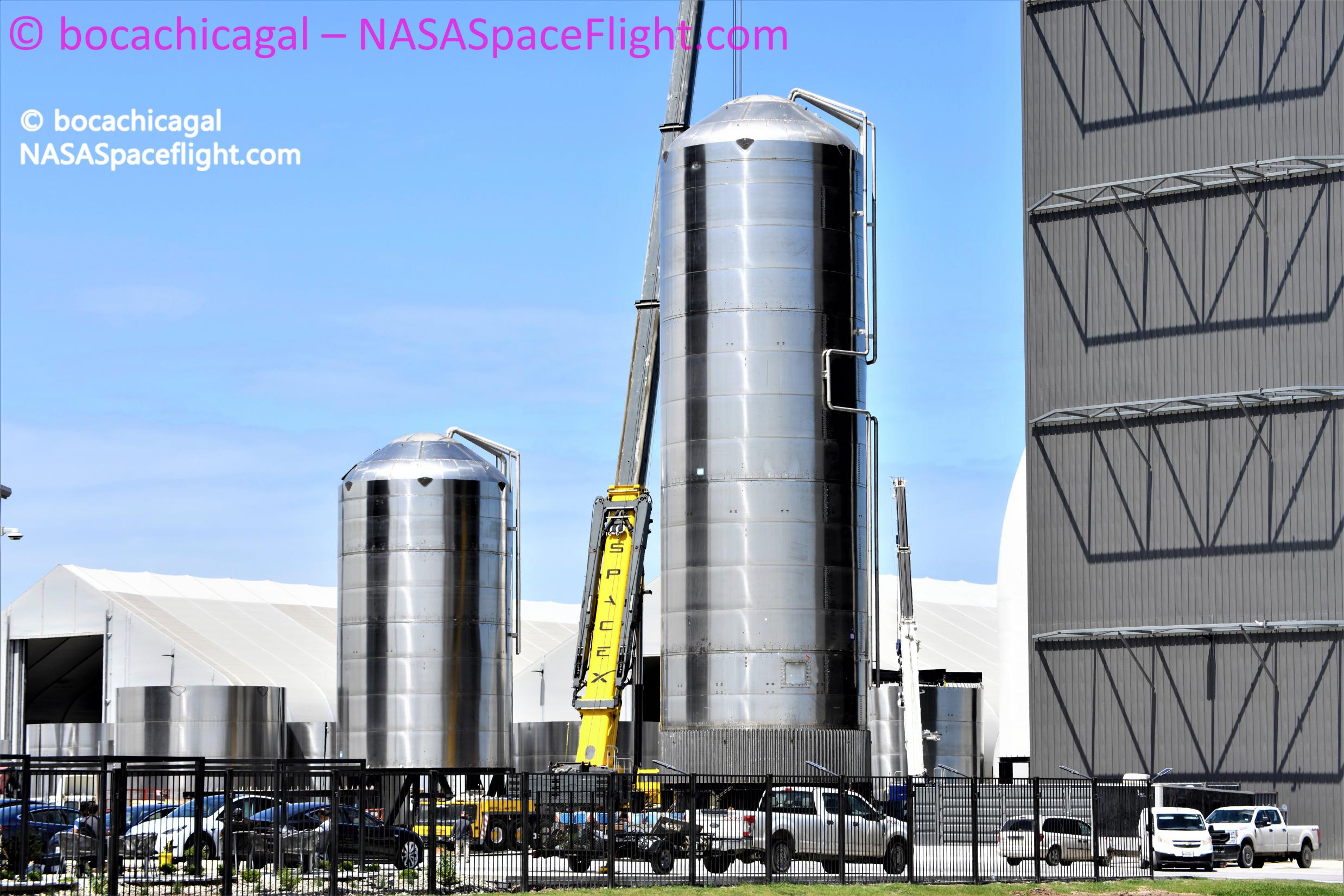 SpaceX has begun installing the first of numerous propellant storage tanks at its first orbital South Texas launch facilities – a mostly ordinary and expected step made extraordinary by the fact that those tanks will be built out of Starship parts.

Labeled “GSE” for Ground Support Equipment, the first signs of those self-built storage tanks began appearing at SpaceX’s Boca Chica Starship factory less than two months ago in mid-February. A matter of weeks later, the first of those SpaceX-brand cryogenic storage tanks is off to the launch site for installation (and insulation) while at least two more tanks are well on their way to completion.

While a few ground starge tanks may look like a distraction in the scope of a program tasked with building the world’s largest (and fully reusable) rocket, the existence of those tanks is far more significant than it might initially appear.

Simply put, rocket propellant storage – even for extremely cold cryogenic liquids like those that SpaceX uses – is a thoroughly solved problem. Numerous commercial vendors exist and industrial demand for practically identical tanks is far higher, further lowering commercial tank costs even for those with niche use-cases thanks to economies of scale. For SpaceX’s purposes, major discounts could like be secured given that the company would need to purchase around three to four-dozen commercial-off-the-shelf (COTS) 100,000 gallon tanks to supply a launch pad with enough commodities for two back-to-back launches of Starship and Super Heavy.

That initial launch capability – which SpaceX appears to be working towards – would likely allow the company to start orbital refueling test flights (and Starlink launches, perhaps) immediately after completion. However, that initial capability wouldn’t suffice for ambitious missions to Mars, the Moon, or higher Earth orbits; where one Starship would need to be rapidly refueled with 3-10+ tanker launches. A launch facility capable of supporting 5-10 back-to-back launches (optimally just a few hours apart) would require many times more propellant storage.

The point is that for the initial target of two (or so) launches between commodity resupply, SpaceX could likely acquire the few dozen new storage tanks it would need for a few million dollars apiece for a total cost likely between $50M and $100M. Instead, SpaceX has decided to design and build its own propellant storage tanks. Even more significantly, the GSE tanks SpaceX has already begun building appear to be virtually identical to Starships.

In other words, SpaceX is effectively taking identical rocket parts, slightly tweaking a handful of those parts, and turning what could have been a rocket into a propellant storage tank. This is significant because relative to all other rockets in history, even including SpaceX’s own Falcon 9 and Heavy, building storage tanks with unchanged rocket parts on a rocket assembly line would be roughly akin to hiring Vincent van Gogh to paint lane lines.

Ever since Elon Musk made the radical decision to switch from composite structures to stainless steel, Starship has always aimed to be radically different than any large rocket before it. Crucially, by using commodity steel, the CEO imagined SpaceX would be able to build Starships fairly easily and for pennies on the dollar next to even SpaceX’s exceptionally affordable Falcon 9. In the last 18 months, it’s become apparent that SpaceX has built a factory capable of churning out one or two massive steel rockets per month and is willing to consign at least four or five of those Starship prototypes to all-but-guaranteed failures for the sake of data-gathering and iterative improvement.

Technically, the most logical conclusion would be that Musk was right and that SpaceX has quickly developed the ability to build steel rockets larger than any other launch vehicle on Earth for perhaps just $5M or less apiece. However, SpaceX is also raising on the order of $1-2B in venture capital annually, so they could technically afford to shoulder the cost of extremely expensive Starship prototypes if the company was confident that there was a path to cut those costs and reach the targets needed for the rocket to make economical sense.

Now, the existence of self-built propellant storage tanks virtually identical to flightworthy Starship airframes all but guarantees that SpaceX is already building Starships for a few million dollars each – and possibly much less. More than a year ago, Musk said that SpaceX was already building the Raptor engines that will power Starship and Super Heavy for less than $1M apiece and was working to mass-produce a simpler variant for less than $250,000. Beyond engines and primary structures, Starship hardware is fairly simple and ranges from Tesla-derived motors, basic flaps, and landing legs to off-the-shelf pressure vessels (COPVs) and wiring. SpaceX has managed that extraordinary cost-efficiency despite the fact that Boca Chica is still nowhere close to the level of volume production Musk is aiming for, meaning that there are still far more efficiencies waiting to be realized.

For now, with virtually no retooling and the exact same assembly line, SpaceX’s South Texas rocket factory is busy churning out massive launch pad tanks – one of which is already preparing for installation while another two speed towards completion. All told, SpaceX appears to be preparing foundations for seven 9m-wide (30ft), 27.5m-tall (90ft) Starship-derived tanks that should be capable of storing ~2200 tons (4.9 million pounds) of subcooled liquid methane in three tanks and ~7300 tons (16.1 million pounds) of liquid oxygen in the other four tanks – enough for two orbital Starship launches.