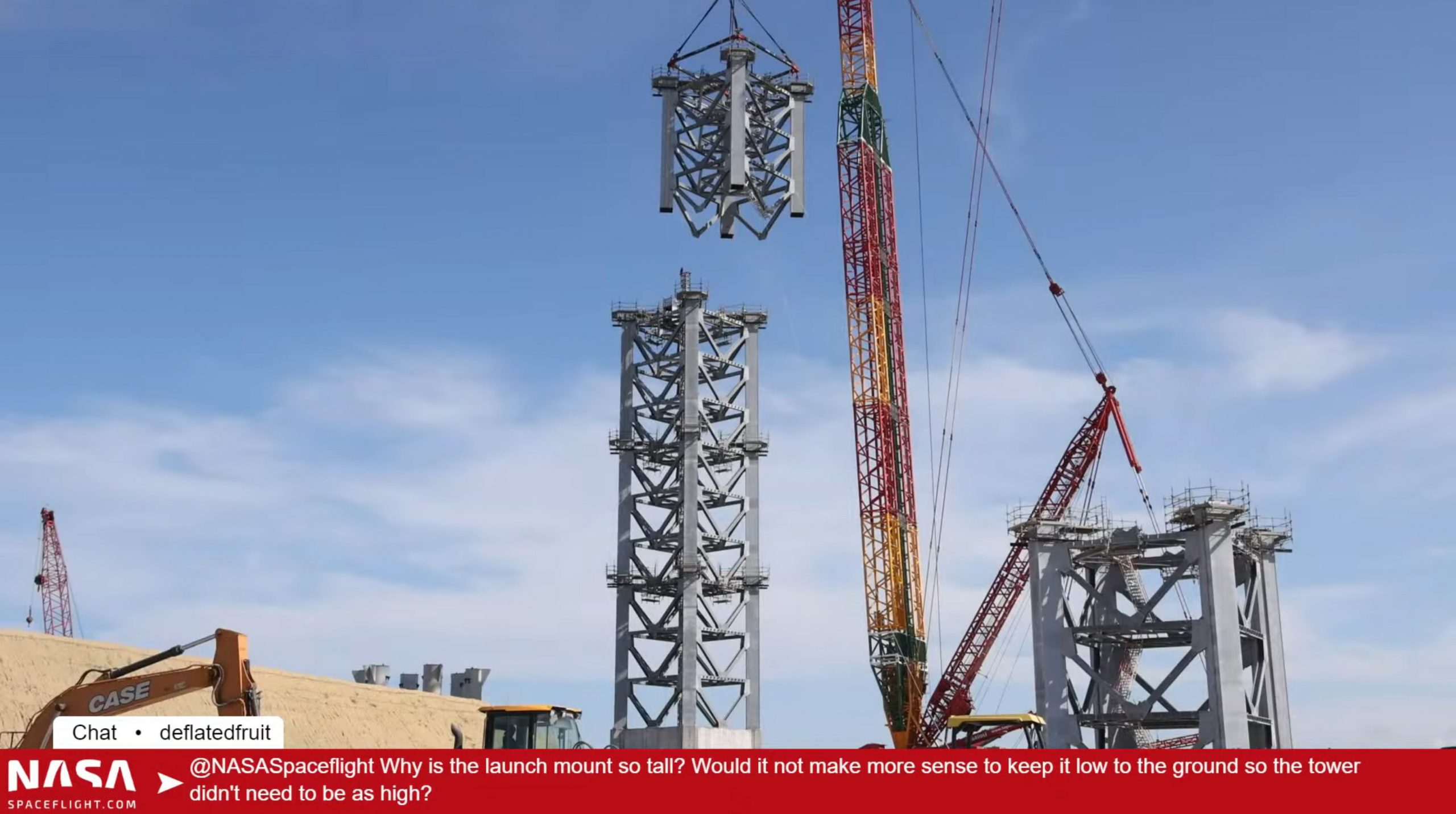 SpaceX installed another prefabricated section of a Starship 'launch tower,' raising the structure to more than half its final height. (NASASpaceflight.com)

SpaceX has installed another prefabricated segment of a new Starship ‘launch tower,’ raising the skyscraper-sized framework to more than half its full height.

Measuring some 86 meters (~280 ft) tall after the latest segment was craned on top, the growing launch tower is now the tallest structure SpaceX has ever built (or had built) – outclassing the 81m (265 ft) ‘high bay’ constructed nearby to shield Starship and Super Heavy booster assembly from the worst of the coastal Texas weather. However, that tower is far from complete and should nearly double in height over the next month or two.

Five tower ‘sections’ have been installed or constructed over the last three months, beginning with a concrete base and a steel section assembled in-situ and followed by the installation of three more steel sections prefabricated around two miles west of the launch site. The concrete base and first steelwork appear to be approximately 32m (~105 ft) tall, while each prefabricated segment has – so far – been ~18m (~60 ft) tall.

A fourth prefabricated section has already been finished and delivered to the launch site and will likely be installed on the tower within a few days, raising it above the 100-meter mark. Back at the build site, a fifth section is almost complete. Once all five prefab segments have been joined, the tower will stand an imposing 122m (400 ft) tall.

That imminent milestone – likely just a week or two away – does raise the question of whether SpaceX is one or two more prefabricated segments away from completing the tower’s structural skeleton. SpaceX currently has permission from the FAA to build a tower 143m (469 ft) tall – technically 146m (479 ft) after the installation of a small lightning rod. With six identical prefabricated sections installed, the existing tower will likely stand around 140m (~460 ft) tall. A seventh identical section would raise the tower’s height to some 158m (~520 ft) – substantially taller than anything SpaceX currently has permission to build.

That would seem to imply that Starship’s launch tower is just two prefabricated sections away from reaching its final height, meaning that it could easily be completed before the end of the month. SpaceX will still have to outfit the tower with an unproven, custom-built mechanism meant to catch Super Heavy boosters (and eventually ships) but Starship’s inaugural orbital flight test campaign does not appear to be contingent on that mechanism.

In the meantime, the tower’s main purpose will be to support a crane capable of stacking Starships on Super Heavy boosters, as well as some kind of stabilization mechanism to make that delicate process slightly more viable on the windy South Texas coast. At the current rate of tower construction, it won’t be long before SpaceX’s solution for those problems becomes apparent.