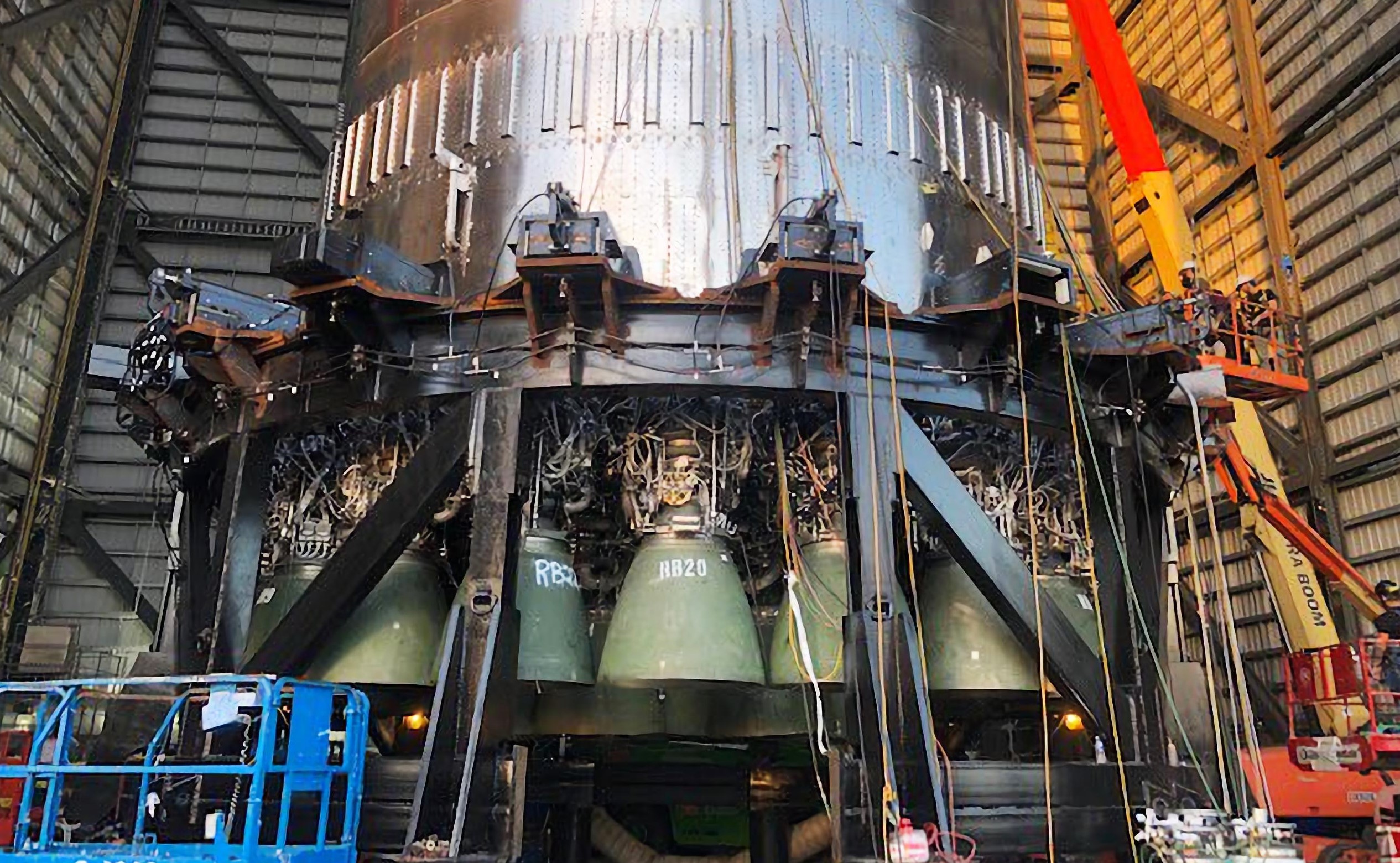 In a virtually unprecedented feat of engineering and rocketry, SpaceX appears to have installed a full 29 Raptor engines on Starship’s first flightworthy Super Heavy booster in a single evening.

After accepting delivery of five new Raptor engines earlier the same day, Super Heavy Booster 4’s (B4) first Raptor rolled out of one of SpaceX’s Starship factory tents around 6pm CDT to form what would become a line of engines awaiting installation. One by one, Raptors were rolled out of that tent and by 5am CDT, an incredible 25 engines had been spotted and installed on Super Heavy. Come shift handoff around 6am, 27 Raptors had reportedly been installed in 12 hours. The two remaining engines likely joined them an hour or two later, marking 29 high-performance rocket engines installed in just 12-14 hours.

Historically, only one other feat of rocketry comes close. In the late 1960s and early 1970s, the Soviet Union was able to install its Saturn V-class “N1” Moon rocket’s 30 engines in just two days. Its NK-15 engines were about the same size as Raptor, approximately 80% as powerful, and collectively formed the most powerful rocket booster ever flown – though N1 never managed a fully successful launch before the program was canceled.

Of course, three of N1’s four test flights ultimately failed as a result (direct or indirect) of challenges with the first stage and its 30 NK-15 engines, marring their ~48-hour installations with the possibility that a less rushed procedure might have prevented issues that later doomed the rocket. The same is somewhat true for Super Heavy Booster 4, given that it’s unclear when the rocket will actually fly. B4 will also need to complete static fire testing – likely making it the most powerful rocket booster ever fired – before its current design and rapid Raptor installation can be considered an unqualified success.

Regardless, given that it was the first time SpaceX has ever attempted to install more than three Raptor engines on a Starship or Super Heavy prototype, managing 29 Raptors in half a day bodes very well for the engine’s ease of installation. Notably, with 29 engines installed, Super Heavy Booster 4 also technically has more thrust potential than any other rocket booster in history. With around 185 tons of thrust each at sea level, a 29-engine static fire could produce almost 5400 tons (~11.9M lbf) of thrust, beating out the Soviet N1 rocket’s ~4630 tons (~10.2M lbf).

SpaceX could reportedly roll Super Heavy Booster 4 to Starship’s nascent orbital launch pad as early as Tuesday, August 3rd, where the ‘launch table’ the rocket might rest on was just installed mere days ago.