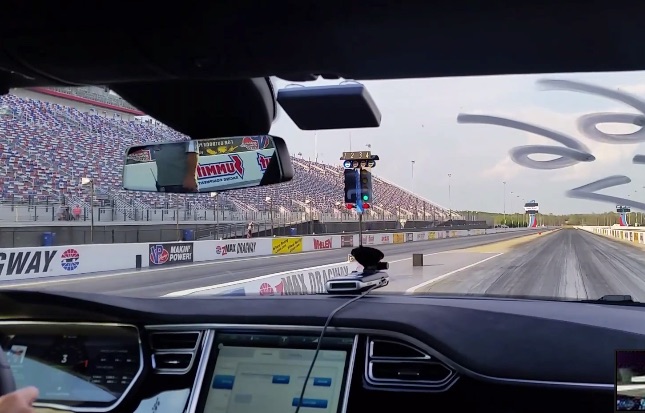 As the magazine says, “Launching a Model S P100D (weighing 5,062 with gear and driver) in full-on Ludicrous Easter-egg mode snaps your body in a manner that is utterly impossible to replicate in any other street-legal production car on normal tires and dry asphalt.”

Just a month ago, Tesla pushed a new “Easter egg” to P100D owners that promised to lower its 0 – 60 time to 2.4 seconds. How come Motor Trend was able to best that mark? That’s because it uses the method employed by the NHRA in professional drag racing. The cars are allowed a 1 foot rollout before tripping the timing lights. According to Motor Trend’s data, the P100D needed 0.26 seconds to travel that first foot and was already moving at 12.7 miles per hour when the timing run officially began.

The Motor Trend test was inspired by an Elon Musk tweet on January 12 suggesting the P100D could scamper to 60 in 2.34 seconds after the Ludicrous Mode Easter egg upgrade. Motor Trend promptly offered to verify Musk’s claim. Add the quarter second consumed by that one foot rollout and the total works out to 2.31 seconds — pretty close to Musk’s prediction.

Now that the Model S P100D has been confirmed as the fastest production car in history, the challengers will be lining up at drag strips all across the country to take on the new sheriff in town. Being quickest to 60 mph does not guarantee that the P100D will be fastest in the quarter mile. Motor Trend points out that both the Tesla and the 911 Turbo S tripped the lights at 10.5 seconds, but the Tesla logs a trap speed of 125.0 mph while the Porsche with higher top end horsepower rips through at 131.8 mph across the finish line.