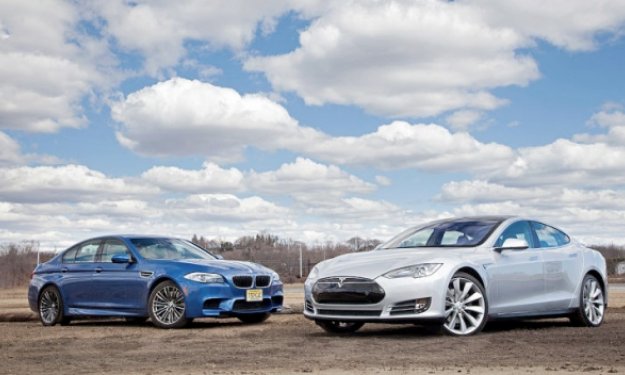 A popular German based BMW forum contributor recently posted a video about his driving experiences with the Tesla Model S vs BMW i3. The Model S driver in the video discusses the notable differences in handling feel between the Tesla and BMW i3.  He goes on to describe how the BMW i3 is a very tall car with a high center of gravity – a result of having an internal combustion engine that sits on top of the vehicle’s battery pack.

The Model S on the other hand has a much lower center of gravity due to a super low mount battery that makes up nearly the entire floor of the vehicle.  The driver, a loyal BMW owner and contributor to M5board.com, goes on to say that “the handling is amazing” on the Model S.  He’s seen in the video drawing comparisons between the handling of the Model S and BMW M5; stating that both feel very comparable with one another.

We’d love to be able to do a circuit track shootout between the Tesla Model S and BMW M5 one day.  Anyone up for the challenge?