A recent study taking a look at vehicle registration data for Model X reveals that younger and more affluent customers are buying Tesla’s crossover SUV. Research conducted by Edmunds showed that the concentration of Model X buyers were, fittingly, from the Generation X crowd – a generation between the ages of 35-54 and nestled between Baby Boomers and Millennials. Not surprisingly, the Model X skewed more towards women who are presumably Moms with young children. By contrast, the Silicon Valley automaker’s first volume production sedan, the Model S, skewed towards older males who are generally early adopters to new technology.

The new study suggests that Tesla’s plan to broaden its reach to a more diverse audience is succeeding. Jessica Caldwell, Edmunds’ Executive Director of Business Analytics said in a press release, “If Tesla is going to succeed over the long term, it needs to break through to all shoppers and not just rich early adopters who tend to skew older and male,” The data is a positive indicator that Tesla’s more affordable mass market Model 3 will have an even wider consumer reach when it goes into production at the end of 2017. “The company certainly has a long way to go with affordability, but Model X has undeniably brought in more female buyers and Gen X’ers to the Tesla brand. That’s an encouraging sign as Tesla takes a make-or-break plunge into the mainstream market with the upcoming Model 3.”, says Caldwell. 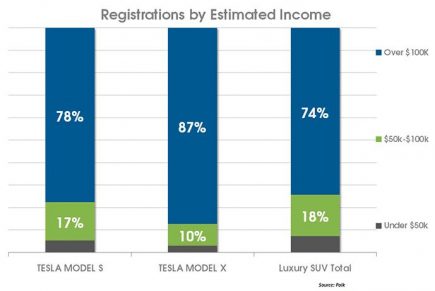 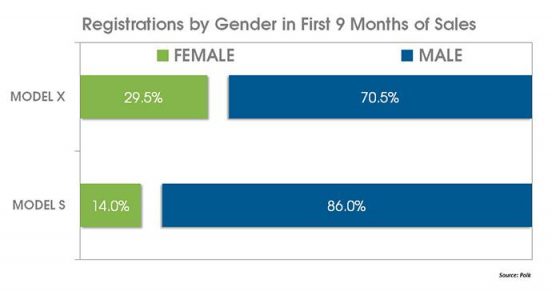 Looking at 5,523 Model X and 4,242 Model S registrations recorded during each model’s first nine months on market, Edmunds was able to see that 30% of Model X buyers were women, more than doubling the number of women registrants on the Model S at 14%. The West Coast still leads in terms of having the most Model X registrations accounting for 55% of total sales, however this is down from the 64% of Model S sales originating from California, Washington and Oregon. Wisconsin, which previously only accounted for .3% of Model S sales, showed the most noticeable increase of Tesla ownership with 2% of Model X sales originating from the Badger State.

The majority of Model X buyers are also wealthier than Model S buyers with 87% of owners reporting incomes greater than $100,000. By comparison, 78% of Model S buyers surpassed a six-figure income.

While the stats provide an interesting look at how the Model X demographic of buyers compares with Model S, Edmunds’ chart also provides valuable insight on how Tesla’s pricey electric crossover SUV compares to other vehicles within its class.