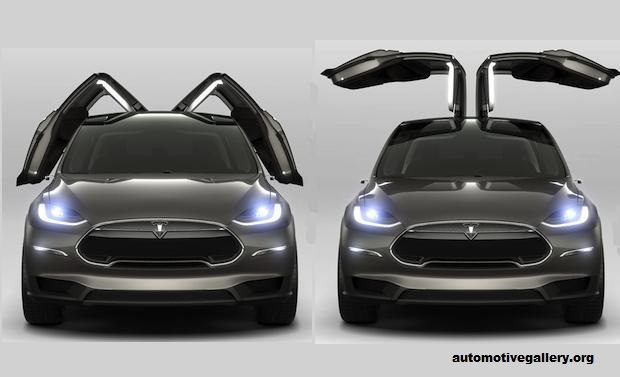 A great gull-wing design is at the heart of the Model X, but manufacturing large numbers of the electric crossover efficiently may be the issue. (Source: AutomotiveGallery.org)

[Update] Elon Musk tweets this morning that the Model X will have gull wing doors and Morgan Stanley cuts its forecast to 5,000 Model X deliveries for 2015.

Speculation is picking up steam for Tesla’s Model X and this new one comes from Morgan Stanley analyst, Adam Jonas, as he points to the double-hinged Gull wing doors as the possible culprit. However, Tesla Motor’s gull wings are actually two-hinged falcon doors that reduce the “wingspan” of the doors and make them more practical for modern garages.

Earlier this month, I was in the battery range issue camp and how Model X’s extra weight (doors) might be causing range issues with the electric crossover. I’m still there to some degree, but have reexamined Musk’s statement about “it’s hard to manufacture many” comments from Tesla earnings call in early November.

The article, “Is Tesla Going to Ditch the Model X Gull-Wing Doors,” identifies Tesla’s Model X design as possibly being one of the largest door openings in auto history.

Jonas says, “A door of that size and weight is going to be very hard to lift. Furthermore, having a hole of that size in the side of the car (that cuts deeply into the roof) could severely compromise structural rigidity impacting handling and safety.”

Doubt is starting to creep in here as no production mules have been spotted anywhere in California.

The business article proposes that Tesla will either ditch the doors or go with more traditional doors. However, I can’t see an Elon Musk company going with traditional mini-van sliding doors, which are also quite heavy and would hurt electric battery range, too.

Either way, Musk and Tesla Motors needs to meet a steep production ramp for the Model X due to lengthy delays and to pivot engineering resources to the Model 3.

Which camp are you in on the Model X delay? Battery range, design or manufacturing challenges?