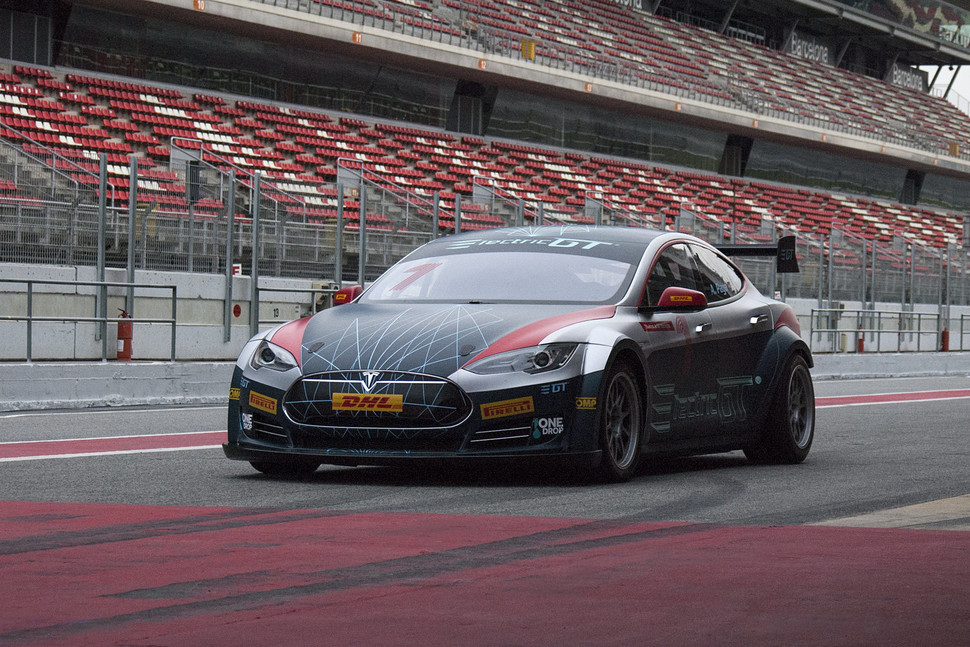 Electric GT, the all-electric racing series built around the Tesla Model S has released a new video highlighting the track capabilities of its tuned Model S race car. With over 1,100 pounds removed from the factory version, new aerodynamic treatments, and a race-ready suspension, the Electric GT Model S whips through a race course resembling that of a child’s electric slot car. The vehicle seen in the video appears to be Electric GT’s Model S P85 race car though the organization has a series of Model S P100D race cars being prepared that is said to be capable of a mind numbing 0-62 mph in 2.1 seconds.

“The Electric GT V2.0 design is the fastest way towards the ‘Age of Light.’ I am very excited to be using the Tesla Model S P100D as it is incredibly quick and innovative. This week we opened the subscription period for teams, and the new car announcement is an exciting prospect for those who want to join us,” says Mark Gemmell, CEO of the Electric GT Championship.

Electric GT’s series will consist of 10 teams with 20 drivers competing in 7 races across historical European raceways and three non-championship races in America. The series says that fans will be able to interact with teams over social media and the races will stream across a variety of platforms.

One of the drivers in the race series is ultra Tesla supporter and environmental activist, Leilani Münter. Münter is a Model S driver and friend to Tesla CEO Elon Musk. She’s appeared in the 2015 award winning film, Racing Extinction, where she was the “getaway” driver in another ultra-modified Model S. The modified Model S in the film had a 15,000 lumens projector in the rear of the car, and a retractable FLIR camera built into the frunk.

“I’ve had many conversations with the Electric GT Series over the last year and we are currently talking with potential sponsors to get me racing in the series full-time. It would be fantastic to finally be racing electric cars – then my race car would finally join my personal car in a world where I can have speed without burning fossil fuels,” Münter said in a comment to Teslarati.

Münter currently races in the ARCA series for Venturini Motorsports. “I’ve driven almost 50,000 miles in my personal Tesla in the last three years and most of the electricity has come from the solar panels on the roof of my home. Driving on sunshine – that is our future.”

Olivier Lombard, one of the drivers in the series, got to drive the upgraded Model S earlier this month and was impressed with the performance. “Driving the EGT Model S was a lot of fun and it’s awesome to see what the future of GT racing looks like,” said Lombard. “It was a fantastic spectacle for those who watched and with several more performances over the next few days, it’s one the fans certainly don’t want to miss,” said Lombard.

Watching the modified Model S whip around the track is incredible and it’s very clear that this car is a performance powerhouse. We are certainly looking forward to the championship starting later this year, and will keep you updated as the series progresses.