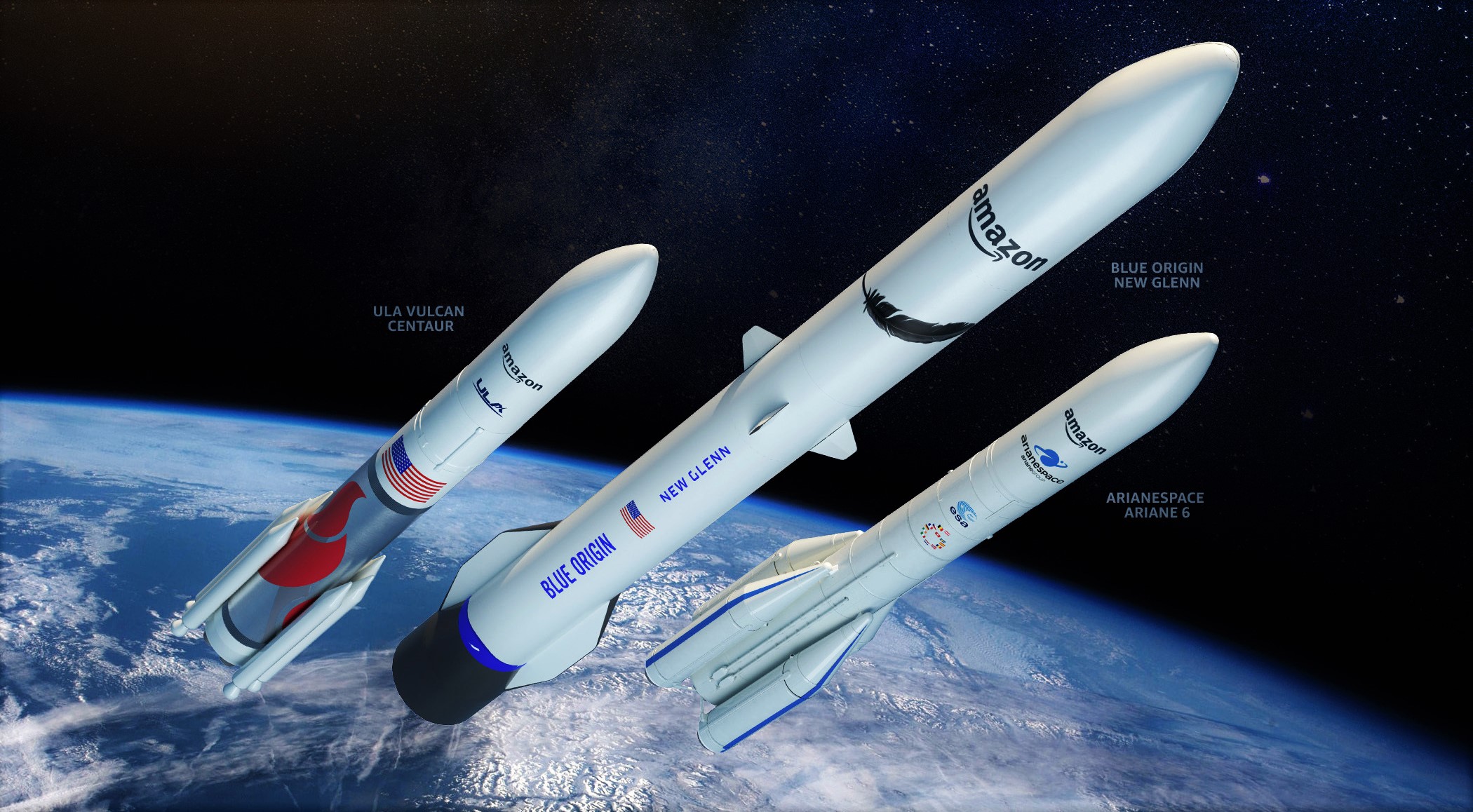 Amazon chooses everyone but SpaceX to launch its Starlink competitor

Amazon has announced a series of record-breaking launch contracts that will place a “majority” of its 3,236-satellite Project Kuiper constellation in the hope of blanketing the Earth with high-quality internet alongside OneWeb, Starlink, Telesat, and others.

Of 68 firm launch contracts and a total of 83 contracts including unexercised options, SpaceX – the world’s most cost-effective, available launch provider – is fully absent. Instead, Amazon, has awarded three batch contracts to United Launch Alliance (ULA), Arianespace, and Blue Origin. Prior to this announcement, Amazon had already purchased two launches of prototype satellites on startup ABL Space’s RS1 rockets and nine operational launches on ULA Atlas V rockets, rounding out what is undoubtedly the most expensive set of commercial launch purchases in spaceflight history.

More likely than not, Amazon is paying a bare minimum of $100 million per launch, though $150-200 million is probably closer to reality. All three of the rockets now scheduled to launch most Kuiper satellites have yet to fly. Arianespace’s Ariane 6 and ULA’s Vulcan Centaur could debut in late 2022, though 2023 is more likely. Blue Origin’s partially reusable New Glenn is unlikely to fly before 2024 or even 2025.

All told, assuming Atlas V can launch at least 15-20 satellites apiece, Amazon’s latest contract likely means that the company has secured enough launch capacity to fully launch the first phase of its Project Kuiper constellation without exercising options. Those 77 operational launches will likely cost the company a minimum of $9.5-10 billion before accounting for the cost of Kuiper satellites or payload adapters.

According to NASA’s ELVPerf calculator, which uses official data provided by each company, Vulcan’s heaviest VC6 variant can launch ~27 tons (~60,000 lb) and New Glenn can launch ~35 tons (~77,000 lb) to a low 300-kilometer (~190 mile) insertion orbit. Ariane 6’s most capable ’64’ variant will likely be able to launch about 20 tons (~44,000 lb) to the same orbit, though official info is only available for a circular 500-kilometer orbit. Assuming Project Kuiper launches are not volume constrained, meaning that most of each rocket’s available performance is being taken advantage of, each Kuiper satellite likely weighs no more than 500-600 kilograms (1100-1300 lb).

Falcon 9 recently broke an internal payload record with the successful launch of 16.25 tons of Starlink satellites to a similarly low insertion orbit. Including the mass of a payload adapter and deployment mechanism, Falcon 9’s true performance was likely closer to 17-18 tons. Combined with Falcon 9’s cheapest public commercial launch contract (~$50 million), it’s possible that SpaceX’s partially reusable Falcon 9 rockets could have launched 25-30 Kuiper satellites apiece for an average cost of ~$1.7 to $2 million per satellite – around 50-80% cheaper than Kuiper’s likely average.

Those significant savings don’t consider SpaceX’s next-generation Starship launch vehicle, which will likely reach orbit and begin commercial launches at least a year before New Glenn. Starship could feasibly carry 100-150 Kuiper satellites per launch and, if full reusability is achieved, might cost less than Falcon 9 despite offering at least five times the performance.

Per Amazon’s Project Kuiper FCC constellation license, the company will need to launch half of its constellation – 1618 satellites – by July 2026. It’s not actually clear if Arianespace, ULA, and Blue Origin will be able to collectively complete the roughly 36 launches that will require over the next four years. In the last four years, Arianespace’s Ariane 5 and ULA’s Atlas and Delta rockets have collectively launched 38 times. The first Kuiper satellite prototype is scheduled to launch no earlier than late 2022, meaning that operational launches are unlikely to begin before mid-2023.

Amazon chooses everyone but SpaceX to launch its Starlink competitor