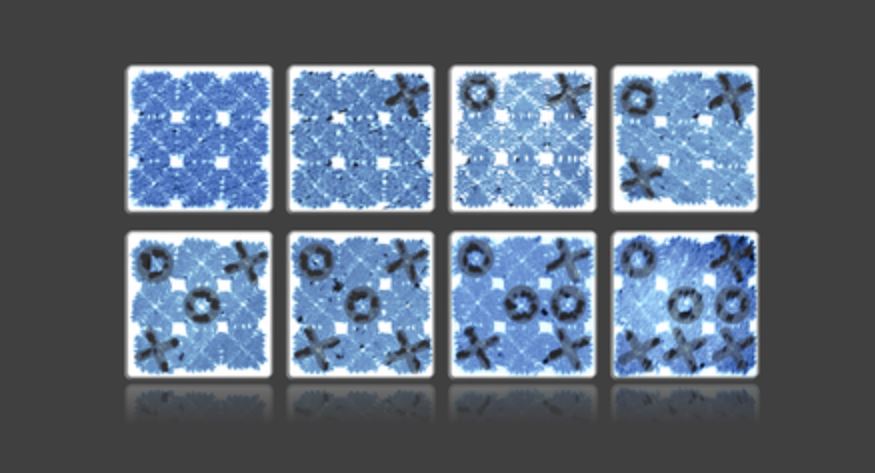 Researchers from The Qian Lab at the California Institute of Technology (Caltech) have used DNA folding, also known as DNA origami, to create the world’s tiniest game of tic-tac-toe. Since its creation in 2006 by Paul Rothemund, this technique has opened up the possibility of building “smart” programmable materials on the nanoscale using these self-assembling molecules. By capitalizing on DNA’s inherent tendency to pair with complementary bases that form its building blocks – guanine (G) pairs with cytosine (C) and adenine pairs (A) with thymine (T) – scientists can take a single strand of DNA and mix in smaller pieces that only attach to certain portions of the longer strand, called ‘staples’, pulling the single strand into the desired form. The team at Caltech has advanced this technique by enabling the forms to be changed, or “reprogrammed”, at will, enabling previously programmed DNA to be upgraded if needed. These advancements may help lead the way in areas such as developing DNA computers and the creation of new chemicals.

Over a period of around six days, each turn taking time for the DNA to reassemble, members of the Caltech research team played out the classic tic-tac-toe game, crowning ‘X’ as the winner.  There were two techniques used: First, a set of DNA tiles (squares) were assembled to form the board. The tile assembly was accomplished using general folding techniques now common in the field and previously demonstrated on an advanced scale with the team’s Mona Lisa project wherein numerous tiles were assembled into the famous portrait. Second, the technique of ‘displacement’ allowed team members to insert new tiles, programmed with an ‘X’ or ‘O’ shape for a specific place on the board, to kick out the blank tile previously there. The full details of their accomplishment were published in the December 18, 2018 edition of the journal Nature Communications.

While DNA is generally known to contain the genetic instructions for building living things, as a molecule, it makes a useful tool for building tiny objects. The original shapes formed with the origami technique were 2D – smiley faces, stars, etc. However, in recent years, scientists have moved into increasingly complex 3D shapes – boxes, triangles, and even rabbits. The Qian Lab has additionally developed software that enables other scientists to easily program 2D assemblies from an image using the fractal methods demonstrated in the Mona Lisa project. The protocols output by the software can even be read by lab robots, completing the automation circle.

An animation of the Caltech team’s tic-tac-toe game:

One of the other long-term goals of DNA origami is to develop DNA robots or machines that can be programmed to act in specific ways inside the body. For example, a drug intended to kill cancerous tumor cells could be encapsulated in a DNA-folded box and only opened when tumor cell DNA matched its sequence-based lock. Combining the developments in artificial intelligence for identifying and predicting disease with the potential targeted delivery systems demonstrated with DNA origami, the future of technology in medicine is promising.

Watch the below video by Nature for an overview of the DNA folding process: