In Elon’s recent announcement about SpaceX’s Interplanetary Transport System, he spoke about the long journey to Mars being fun and exciting with amenities such as movies, games, lecture halls, and a restaurant. For fun, I took to Tinkercad (online 3D modeling software – try it out if you haven’t already) to envision a few things of my own in the spirit of his “fun” suggestion.

Note: I’m aware that my model of the crew cabin isn’t perfect. Give me a break! I was working with a short fly-through video and software intended for making toys. And I was just having fun. The general idea has still been captured. 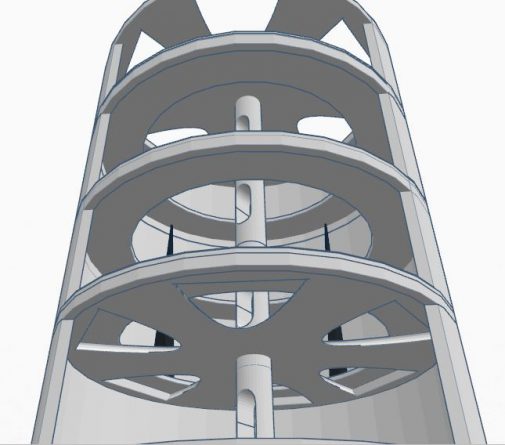 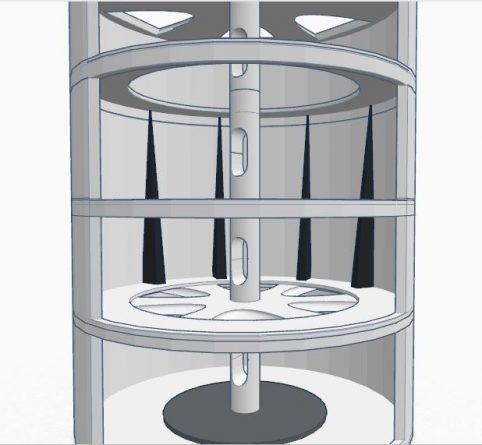 I cannot for the life of me imagine making a three-to-six month journey to Mars without caffeine input. Plus, if you’re truly talking interplanetary, there will be no discussion on the matter. Pluto tourists have their demands. My preferred source is from the lovely makers of Red Bull; however, I’ll take a Starbucks Venti Carmel Macchiato, hot (with an extra shot of espresso) as a close runner up. That being said, a coffee station would be a must. Oh, and there should be plenty of dispensers because lines suck. Elon mentioned a restaurant, which is great for sit down dinners under the stars and all, but what about those days when you just want something quick so you can get back to Oolon Colluphid’s Where God Went Wrong? You’d need some sort of food station for that, and I imagine it might look something like one of those old pie dispensers that used to frequent Grand Central Station. Actually, I’ve heard they still have “Vending Machine Restaurants” in certain places in the world. This might not be much different. Except for payment because after a $200,000 ticket, my damn meals better be included.

Note: Someone mentioned to me that tables and chairs were moot because, well, space. But I’ve seen enough videos of astronauts chasing their food down to anticipate a desire for a “Velcro-ed” type surface to attach your runaway shrimp cocktail to (an astronaut favorite). Hence, the pull-out tables under the dispenser.

Since future Martian colonial travelers will need to maintain their strength for their surface arrival, a physical fitness regimen is likely to be a “must” for most; however, in space gravity (that was a misleading phrase, I know), exercise is going to eat up a lot of “fun” time because it takes so long to achieve results in zero gravity. I imagine having an optional centrifuge gym wherein equipment is attached to the inside of a spinning ring might help. The additional imitation gravity could make the workout more effective.

My version here is obviously pretty bulky, but what my patience lacks, I’m sure an engineer could overcome by making something slimmer. 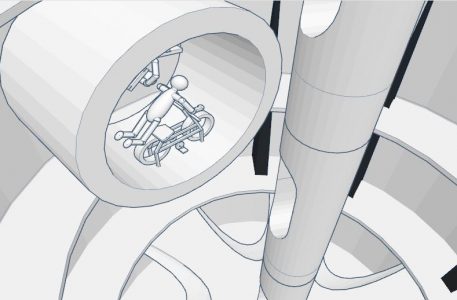 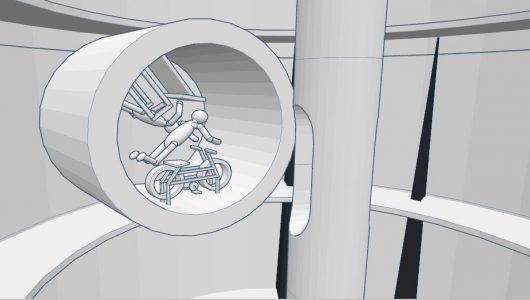 Okay, this one might just be clouds in my coffee, but wouldn’t it be awesome?

Liquids behave super funky in zero gravity – then imagine them being sprayed everywhere while you floated around through obstacle course rings. You could put money on there being amusing YouTube videos coming out of that one. 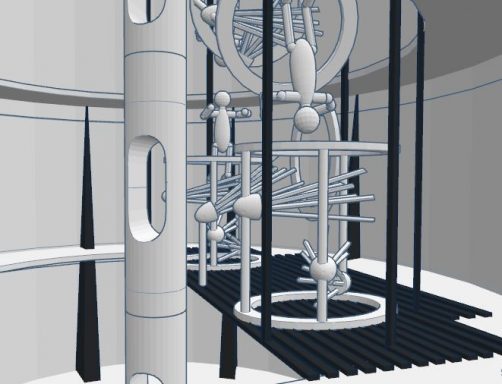 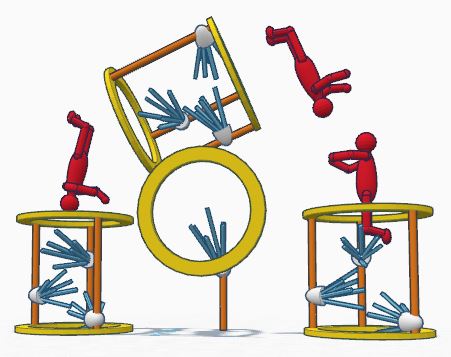 The whole thing would be a portable setup and would be enclosed by some sort of sheeting material, of course. Not everyone wants blobs of H2O surprising them during brunch. There could be “Water Park Wednesdays” or something. Good times a comin’. Well, that’s what I’ve got for now! I truly enjoyed designing this stuff. I highly recommend it.

P.S. If you’d like to give your own ideas a whirl without totally starting from scratch, all the models I’ve presented here are publicly available under a “Sharealike” license on Tinkercad’s website. Let’s imagine together!