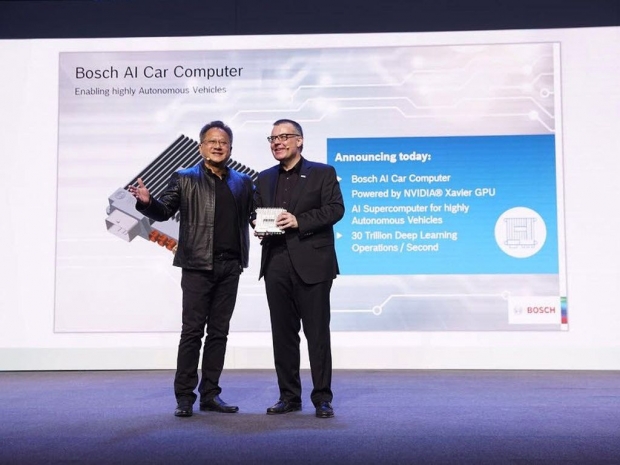 NVIDIA CEO Jen-Hsun Huang announced to attendees at the Bosch Connected World conference in Berlin this week that they have partnered with Bosch to producing  an artificial intelligence supercomputer aimed at the self-driving car industry.

“I’m so proud to announce that the world’s leading tier-one automotive supplier — the only tier one that supports every car maker in the world — is building an AI car computer for the mass market,” said Huang. “We’ve really supercharged our roadmap to autonomous vehicles. We’ve dedicated ourselves to build an end-to-end deep learning solution. Nearly everyone using deep learning is using our platform.”

The announcement made by NVIDIA comes on the heels of this week’s announcement that the world’s leading chipmaker Intel will be acquiring ex-Tesla Autopilot partner Mobileye for $15 billion.

NVIDIA’s Drive PX platform with Xavier technology can process up to 30 trillion deep learning operations a second while drawing just 30 watts of power. It is intended to provide Level 4 autonomy, where a vehicle equipped with the technology can drive on its own.

Huang noted that a wide variety of companies are actively working on self-driving solutions. From carmakers like Audi, Ford, BMW, and Tesla, to technology companies such as Waymo, Uber and China’s Baidu.

As the self-driving car industry continues to take shape, vehicles will require an unprecedented level of computing power to make instantaneous decisions on nearly an infinite number of scenarios that can take place in a real world environment. Though vehicles on the road today are equipped with driving-assist features like Tesla Autopilot that allows the car to detect object and handle acceleration and braking when needed, the requirements for autonomous driving are dramatically more demanding. Cars that stray from their lanes, objects that fall onto the roadway, rapid shifts in weather conditions, deer that dart across the road. The permutations are endless, said Huang.

Despite the positive outlook on a self-driving future being presented at Bosch Connected World, the conference also revealed a significant difference of opinion between the companies in attendance regarding when they expect full Level 5 autonomy – when a vehicle can drive entire on its own without human involvement – to become widely available. Huang told the conference he expects to have chips available that will permit Level 3 automated driving which still requires a human driver to intervene, by the end of this year. He sees those chips being incorporated into customers’ cars and on the road by the end of 2018. The following year will see chips capable of Level 4 full autonomy on the road. The distinction between Level 4 and Level 5 full autonomy is that Level 4 does not cover every driving scenario.

Elmar Frickenstein, the head of autonomous driving at BMW, told the conference his company will be ready to offer cars with Level 3 capability in 2021 with Level 4 and Level 5 autonomy following shortly thereafter. He thinks self-driving cars may first be produced in small numbers for fleet customers like Uber, Waymo, and Baidu.

Surprisingly, Bosch CEO Volkmar Denner told the attendees his timeline for fully self-driving cars for mainstream customers is not before 2025, if then.

Fully self driving cars that can operate in all environments require enormous computing power, Huang told the conference. “No human could write enough code to capture the vast diversity and complexity that we do so easily, called driving,” he said.

The conference highlighted the differences between traditional car companies, which think full autonomy is still 7 to 10 years away, and chip companies like NVIDIA who see a much shorter timeline. Huang thinks companies like his will drive the pace of change faster than predicted. “In the near future, you’re going to see these schedules pull in,” he says.

Tesla, which uses a supercomputer made by NVIDIA on Model S, Model X and the upcoming Model 3 that are equipped with Autopilot 2.0 full self-driving hardware, is perhaps the most optimistic of all when it comes to having fully autonomous vehicles on the road. Elon Musk believes every car equipped with the Hardware 2 package will begin seeing Full Self-Driving capabilities as early as this year, barring regulatory approval.

Tesla is accumulating driving data from billions of miles of real world driving each day and using that information to improve its algorithm for Autopilot.