A recently published Rivian patent application titled “Configurable Battery Pack for Fast Charge” describes a method of switching between battery pack connection types to allow for both 450V and 900V fast charging without the need for specialized components. The invention was filed in both the US and internationally, and both applications just published today as US Patent Publication No. 2019/0126761 A1 and International Publication No. WO/2019/084507 A1.

Rivian’s application sets out to solve three specific issues with electric vehicle battery charging. First, increases in charging rates typically require more expensive parts that are rated for the higher current requirements. Second, electronic devices operated while a battery is charging may be impacted via increased voltage when a battery’s charging rate is increased. Finally, when a fault occurs in a battery module, a battery system often needs to be completely disconnected from any loads or the charging voltage must be changed.

The basic concept of the application purports to solve the above-referenced problems. As described, the invention claims that battery modules connected in parallel achieve a targeted maximum high voltage for an electric load (such as 450V), but when connected in series that voltage can be doubled (900V). Details of why this is advantageous are explained in the application as follows:

“A configurable battery system allows the techniques of [this invention] to be applied to an electric vehicle…to more fully utilize a battery charger’s potential [where] it is desirable to achieve a particular charging target. For example, a charging target of 150 kW at 450 V may require a current of 334 A…[and] components may need to be sourced to handle up to 400 A continuously to handle the charging….If a battery system were able to take advantage of charging at 900 V, the charging target of 150 kW could be achieved at just 167 A, which may allow for more numerous, better quality, or cheaper options for charging components. For example, a current of 167 A may allow different hardware to be used than if the current were nearer to 400 A.“ 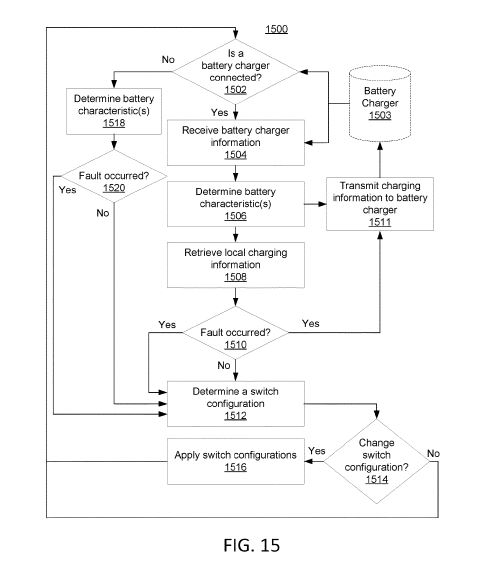 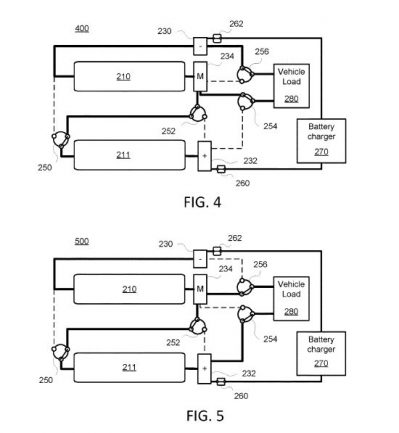 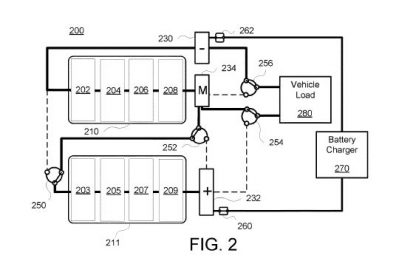 The application also includes a battery management system to determine which connection should be used at a given point and switch the connection type accordingly. This same management system is also used to detect faults in the system while charging and use the switching capability to handle them accordingly rather than disconnecting any battery loads.

The US application for this invention was filed June 8, 2018 and thus has not yet been examined. However, in the international version, an examiner has already searched for related inventions based on the first 10 claims of Rivian’s application. These claims only describe “a configurable battery system in which connection of two batteries can be switched between a series and a parallel connection”, which is not considered novel on its own.

This kind of finding is not uncommon for applications undergoing the international filing process and will be further addressed once filed in specific countries. Three other inventions were determined to be present in the application which will likely be incorporated with the first ten as the invention’s proceedings continue.

Rivian aims to be the leading expert on battery technology, and patent applications such as this one are a nod towards that innovation goal. The Michigan-based all-electric car maker runs a battery lab in Irvine, California where it has picked up several engineers from renowned supercar brand McLaren. This talent pool includes hypercar engineer Richard Farquhar who is their VP of Propulsion, leading Rivian’s battery and powertrain development.

Currently, each Rivian battery module holds 864 cells, stacked evenly on top of one another, with a thin 7mm aluminum plate with liquid coolant in between. In addition to connection testing, the company uses machine learning to adjust battery cell settings to build predictive models and tune the cells based on situations that may be encountered, such as weather conditions.

Altogether, Rivian’s aim to achieve a level of battery technology that’s reliable and optimal for the electric outdoor adventure branding it has embraced looks to be moving in a promising direction.