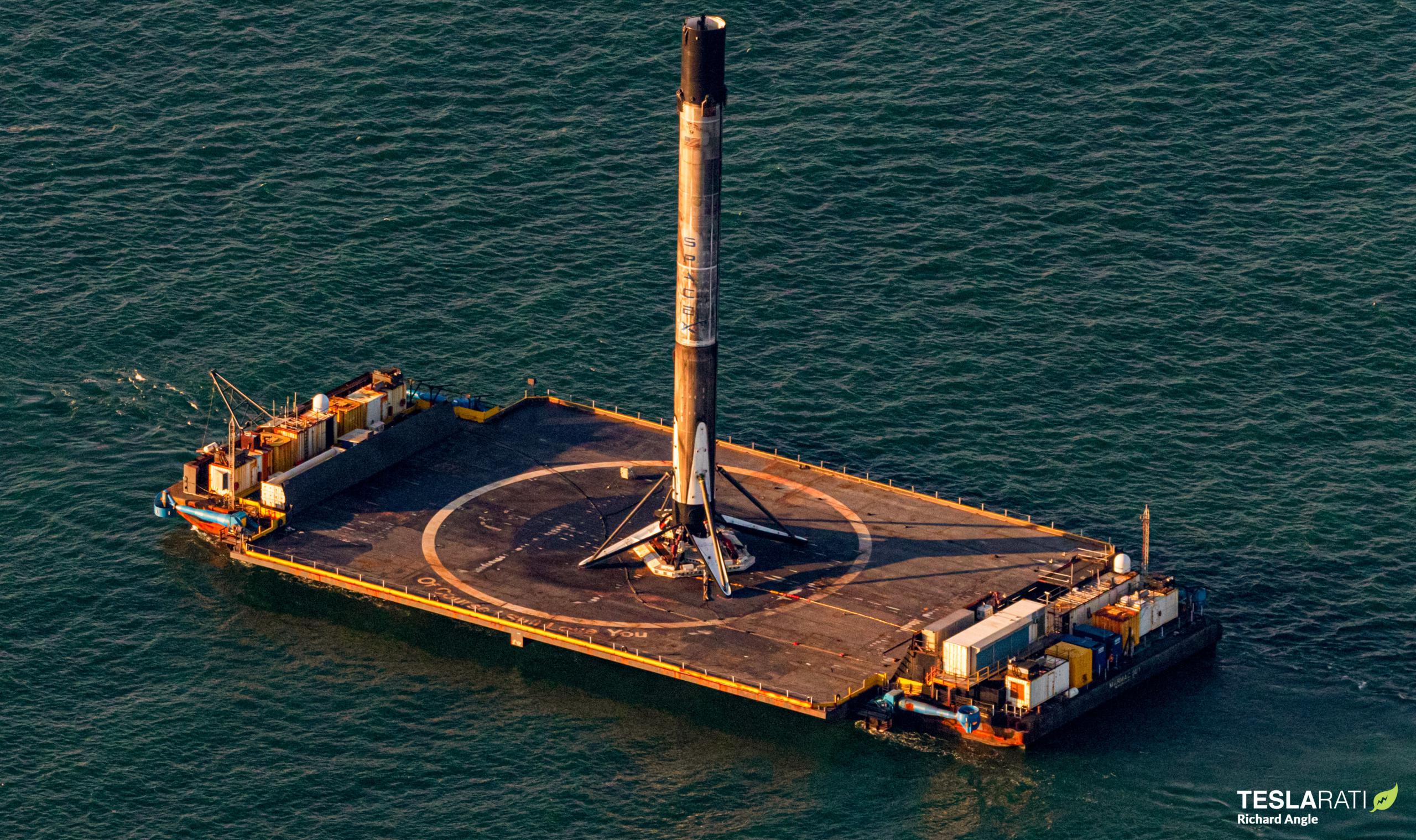 In a period of just 12 hours last Friday, SpaceX successfully returned Falcon 9 booster B1058 and two payload fairing halves to Port Canaveral and a photographer-laden helicopter was airborne to capture it.

With its safe return to dry land, fairing recovery ship GO Ms. Tree’s bullseye catch of an already twice-flown fairing all but guarantees that the record-breaking payload fairing will have a chance to launch a fourth time in the near future. Meanwhile, Falcon 9 booster B1058 – the first US-built rocket to launch US astronauts since June 2011 – will soon be well on its way to its own fourth flight, likely for one of several dozen Starlink missions SpaceX aims to launch in the next ~15 months.

Aside from placing what CEO Elon Musk says is the last batch of satellites needed to kick off the Starlink internet network’s first public beta tests, the Starlink-12 mission was SpaceX’s 17th this year, leaving the company on track to beat its annual launch record by at least a small margin.

If SpaceX continues to follow its 2020 average of one Falcon 9 launch ever ~16.4 days, the company will likely end the year with 22 missions under its belt, narrowly beating the 21 launches it completed in 2018. If it follows its launch average – ~12.8 days per launch – from just the last four or so months, however, SpaceX could crush its record with some 24 or 25 launches this year. Given recent disruptions from reliably bad weather and a rare last-second launch abort, which trajectory SpaceX will follow over the next ~12 weeks is entirely up in the air.

Regardless of the outcome, though, reusability will have played a foundational role to a degree thus far unprecedented. Barring a major surprise, SpaceX will end 2020 having launched just five new Falcon 9 boosters – three of which will likely launch within the last two months of the year.

For fairing recovery and reuse, 2020 has been an even more groundbreaking, seeing SpaceX (seemingly) begin to find steadier footing with increasingly consistent fairing catches. Impressively, in the measly 11 months since SpaceX first reused a Falcon fairing, nearly a third of all launches and almost half of all Starlink missions have flown with one or two flight-proven halves. Recently, Musk even revealed that SpaceX intends for fairings and boosters to be capable of at least 10 launches each, confirming that Starlink-12’s now thrice-flown fairing half is no fluke.

Drone ship Of Course I Still Love You’s (OCISLY) successful Starlink-12 booster recovery ended an agonizing three weeks of back and forth as SpaceX was tugged in a circle by ULA’s launch priority, technical difficulties, and stormy summer weather. Originally meant to recover Falcon 9 booster B1058 as early as mid-September, the launch slowly slipped its way to October 6th. Beginning in late-September, drone ship Just Read The Instructions (JRTI) joined the fray for its role in SpaceX’s GPS III SV04 launch for the US military, a launch that would also find itself delayed several times.

Two seconds before liftoff, new Falcon 9 booster B1062 automatically aborted its October 2nd launch attempt due to bad pressure readings in at least one of its nine Merlin 1D engines. SpaceX has since taken the rocket horizontal and is likely swapping multiple engines, possibly necessitating a second static fire test before the next attempt sometime later this month. That abort has also delayed SpaceX’s second NASA astronaut launch (Crew-1) from Halloween to mid-November to ensure no commonality.

SpaceX has an absolutely jam-packed fourth quarter ahead of it, ranging from GPS III SV04 and Crew-1 to a Sirius XM radio satellite, a Turkish communications satellite, and the joint NASA/ESA/CNES Sentinel 6A oceanography spacecraft. Stay tuned for updates and spectacular new photos from the Teslarati team.