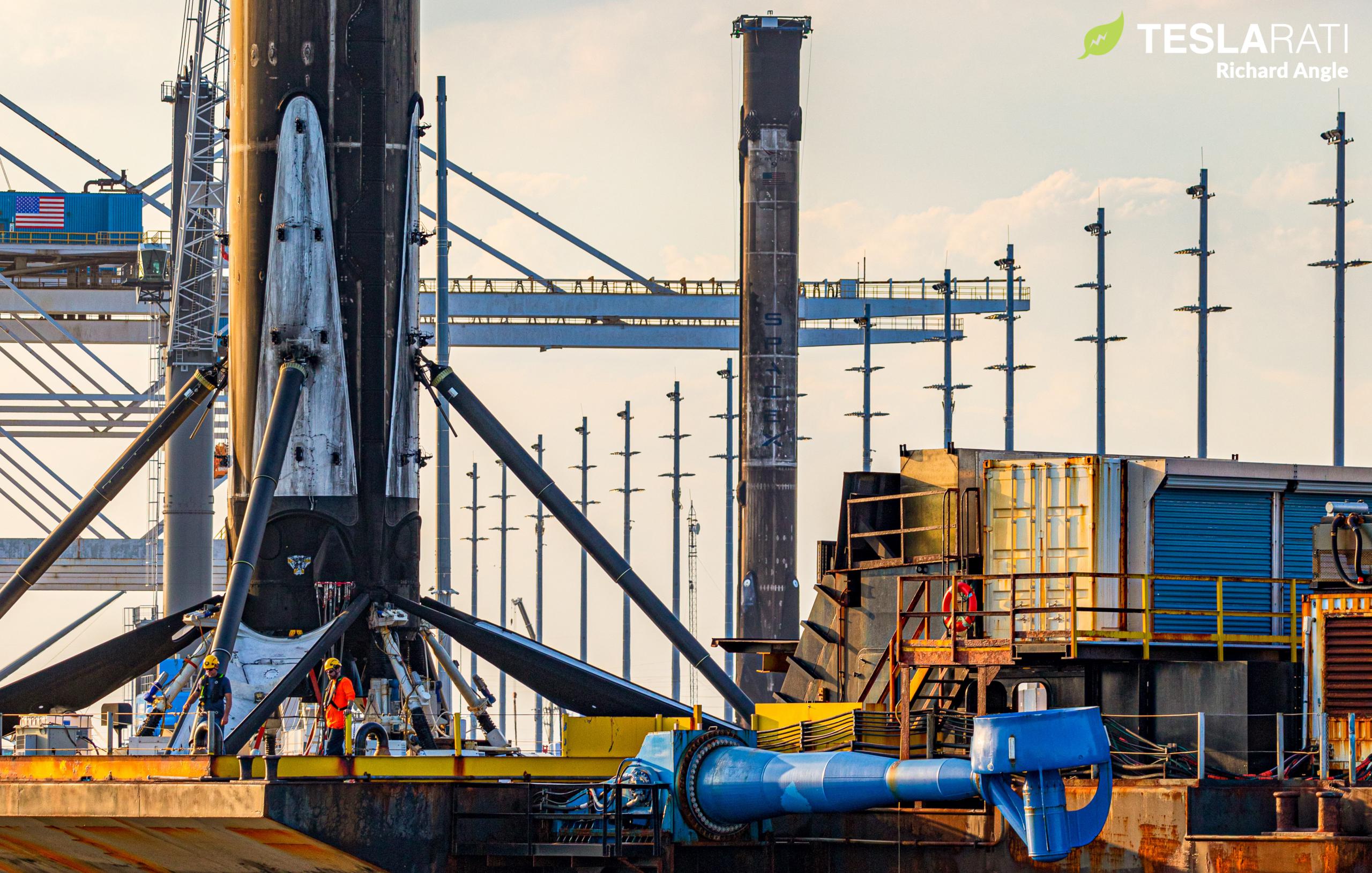 For the first time ever, two flight-proven Falcon 9 boosters have met in port after back-to-back launches and landings. (Richard Angle)

For the first time ever, two SpaceX Falcon 9 boosters – fresh off of two successful Starlink launches and landings – have met back at Port Canaveral, creating the first rocket ‘traffic jam’ of its kind.

On March 11th, Falcon 9 booster B1058 stuck its sixth launch and landing after supporting SpaceX’s sixth dedicated Starlink launch (Starlink-20) this year. 74 hours later, a separate Falcon 9 rocket lifted off from SpaceX’s second East Coast launch pad, successfully sending another batch of 60 Starlink satellites (Starlink-21) on their way to orbit. For its role in the mission, booster B1051 became the first Falcon first stage to launch and land nine times – just one shy of a ten-flight rocket reusability goal SpaceX has been chasing for years.

Now, aside from setting the new standard for Falcon reusability, placing 120 satellites into orbit in three days, and breaking SpaceX’s record for the shortest turnaround between two East Coast launches, the back-to-back Starlink launches have left both Falcon 9 boosters in the right place and right time to cross paths as they prepare for future flights.

As SpaceX began to ramp up its orbital launch cadence – largely thanks to Starlink – throughout 2020, it become clear that the company would eventually start to find new pressure points as it pushed its fleet of reusable rockets and their recovery assets to new limits. In 2021, that intentional exertion of stress across the broader SpaceX launch ‘pipeline’ has become even clearer.

A mere 10 weeks into 2021, SpaceX has already completed eight orbital launches, averaging one mission every nine days or 40 launches per year if extrapolated through the end of 2021. Just two days prior to Falcon 9 booster B1058’s arrival back at Port Canaveral after its successful Starlink-20 launch, Falcon 9 booster B1049 – last tasked with launching Starlink-17 on March 4th – wrapped up its port processing and was transported by road back to Cape Canaveral Air Force Station (CCAFS) or Kennedy Space Center (KSC) to prepare for its ninth flight.

At that point, it became clear it was just a matter of time before two boosters would simultaneously occupy SpaceX’s Port Canaveral berths. Two days later, record-breaking Falcon 9 booster B1051 arrived back in port and was greeted by booster B1058 – legs retracted, standing vertical, and waiting to be ‘broken over’ (brought horizontal) for transport.

It’s hard to imagine a better or (pardon the buzzword) more synergistic pair of boosters to appear in port together. On their separate launch debuts, Falcon 9 B1051 supported Crew Dragon’s spectacularly flawless uncrewed launch debut, while Falcon 9 B1058 became the first private rocket in history to launch US astronauts 14 months later. Known as Demo-1 and Demo-2, those two missions collectively mark arguably the most significant milestone in the history of modern US spaceflight, ending a decade-long period where the US was unable to launch its own astronauts.

Just a week after the rocket’s 2019 Demo-1 launch debut, Falcon 9 B1051 is SpaceX’s new booster fleet ‘life leader’ (the most-flown rocket) after averaging one launch ever 11 weeks for the last two years. Aside from supporting Cargo Dragon 2’s launch debut last December, Falcon 9 B1058 has flown six times, averaging an even more impressive one launch every eight weeks. Together, the two boosters have aced 15 orbital-class launches roughly 190 metric tons of satellites and Dragon spacecraft into orbit in their two-year career, significantly more than the maximum payload of Saturn V – the largest rocket to successfully launch.