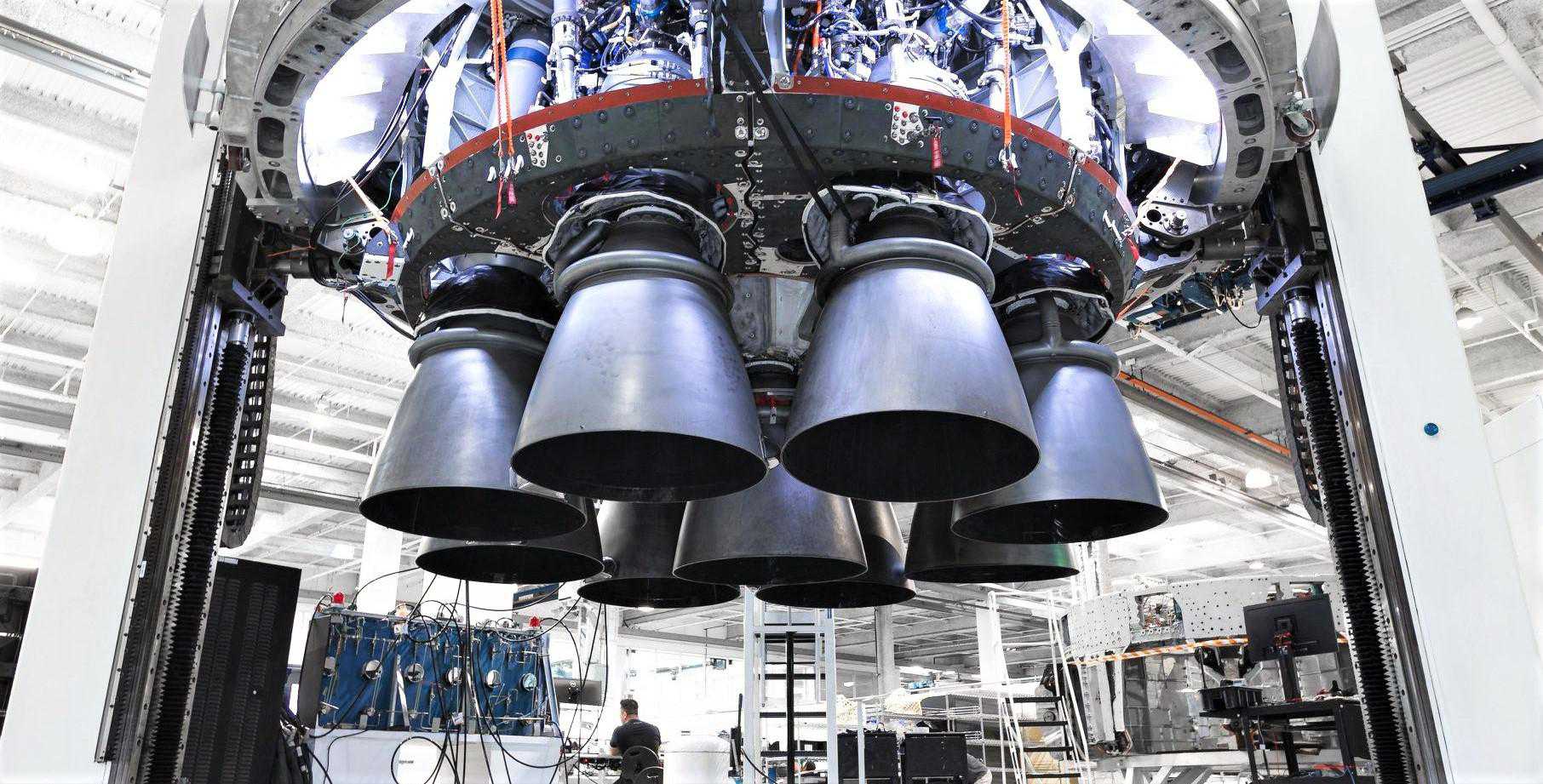 Via the US Air Force, SpaceX has published some of the best views ever of Falcon 9 Block 5 rocket production. (SpaceX)

The United States Air Force (USAF) has published a number of spectacular photos shared by SpaceX, revealing some unprecedentedly detailed views of a Falcon 9 rocket in various stages of manufacturing.

Likely taken in and around SpaceX’s massive Hawthorne, California rocket factory and headquarters and McGregor, Texas test facilities in recent weeks, these new photos show the work being done behind the scenes to prepare a brand new Falcon 9 rocket for SpaceX’s next US Air Force launch. Over the last few years, the extremely competitive Falcon 9 rocket has secured SpaceX up to five launch contracts for the USAF’s next-generation GPS III satellite constellation.

Made up of three explicit contracts and two contract options to be exercised (or discarded) later on, SpaceX completed the first of those contracts in December 2018, successfully launching GPS III SV01 – the first of 32 planned satellites. As evidenced by the name, GPS III is the latest iteration of US Global Positioning System satellites and should offer better security, a greater resistance to jamming and interference, and improved navigational accuracy. Unfortunately, it could be several years to half a decade or more before civilian users begin to see the benefits from GPS III, but chances are good that SpaceX will come to launch a vast majority of the upgraded satellites.

According to the post that accompanied the photos published by the Space and Missile Systems Center (SMC), SpaceX’s second USAF GPS III mission – this time carrying Space Vehicle 03 (SV03) – is scheduled to launch no earlier than (NET) the end of Q1 2020. Preparations are reportedly well underway for the critical launch: SMC says that SpaceX has already delivered the mission’s new Falcon 9 Block 5 booster from its Hawthorne factory to McGregor, Texas, where technicians are now preparing the reusable rocket for a routine static fire test before shipping it east to Florida.

Astute observers will notice that both the GPS III satellite mass and the orbit it’s heading to are significantly lower than an array of prior missions that have launched heavier satellites much higher and still recovered the Falcon 9 booster along the way. SpaceX’s first GPS III launch was particularly exceptional because it marked the first and only time that a new Falcon 9 Block 5 rocket was intentionally expended without any attempt to land the booster.

In fact, Falcon 9 booster B1054 didn’t even have a semblance of landing legs or grid fins installed, a testament to the certainty of its premature demise. Thankfully, whatever the dubiously technical reasons that led to B1054’s demise, it appears that SpaceX may actually be allowed to recover the Falcon 9 booster (likely B1060 or B1061) assigned to launch GPS III SV03. Although nothing has actually been said along those lines, the Falcon 9 booster pictured in the middle photo below – implied to be the Air Force’s next GPS launch vehicle – clearly has some of the basic hardware needed for landing legs.

As such, there is at least a small excuse to preserve hope that SpaceX’s next Falcon 9 GPS III launch will feature a booster landing, thus preventing a premature and extremely wasteful demise after just a single launch. Even if the US Air Force never actually qualifies flight-proven commercial rockets to launch its payloads, the recovered booster should be able to support anywhere from several to 90+ additional launches before SpaceX actually needs to retire or expend the booster.