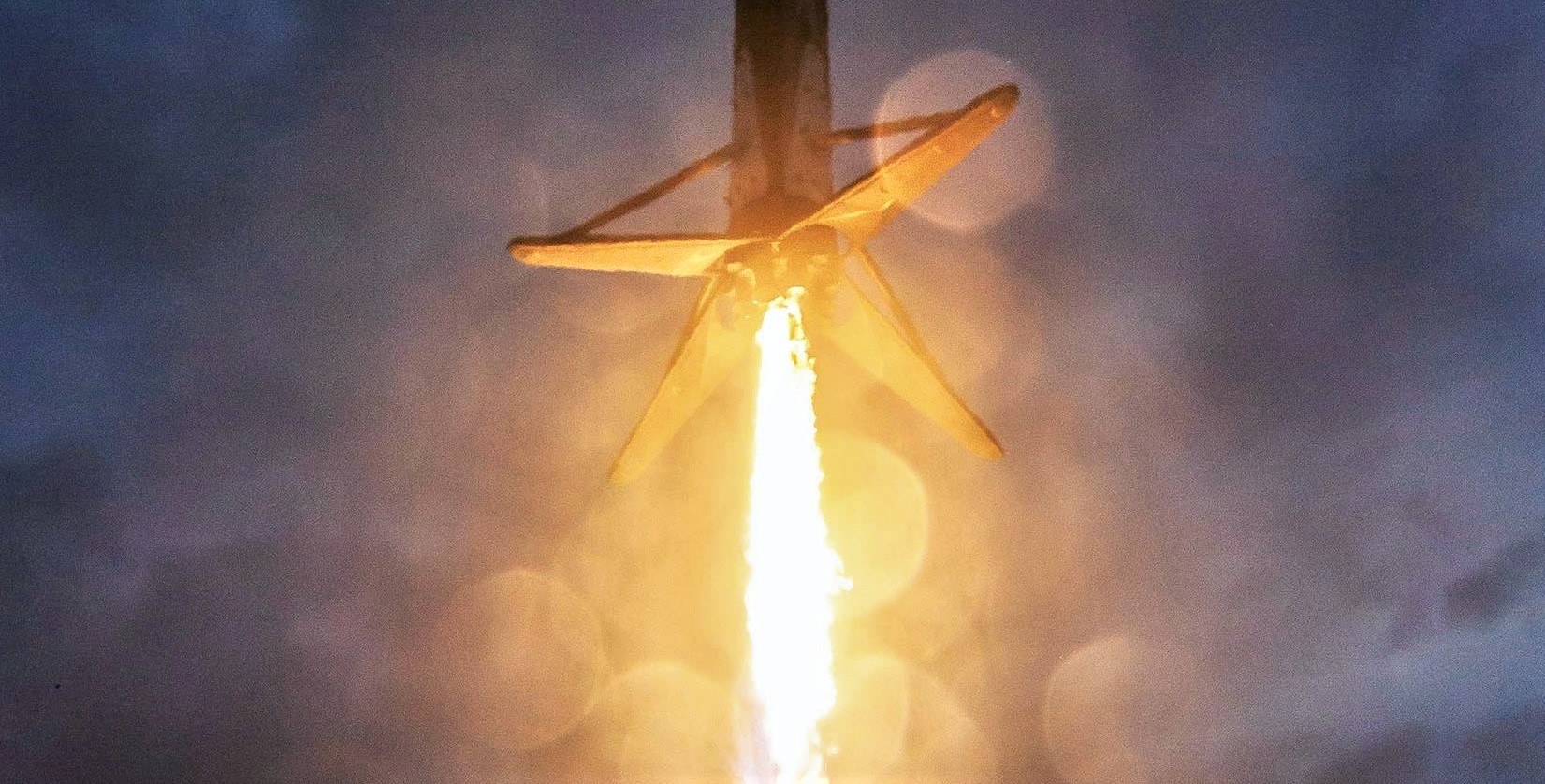 Falcon Heavy center core B1055 successfully landed aboard drone ship OCISLY after a record-breaking reentry. Here's to hoping that B1057 can repeat the feat. ? (SpaceX)

SpaceX’s third Falcon Heavy launch is ready to wow crowds once more with a synchronized side booster landing at Cape Canaveral and a center core recovery attempt more than 1200 km (750 mi) off the coast of Florida.

Based on the fact that Falcon Heavy’s STP-2 center core (B1057) is set to smash SpaceX’s current record for drone ship downrange distance, chances are good that B1057 will separate from the upper stage and payload traveling faster and higher than any recoverable Falcon booster before it. In short, the fresh Block 5 booster will likely be subjected to the most extreme (hottest) atmospheric reentry a SpaceX booster has ever experienced before a serious recover attempt. Thankfully, the earliest the booster can be expected to fly again is H2 2020, giving SpaceX at least a full year for a cautious, careful refurbishment.

Weather and rocket pending, Falcon Heavy Flight 3 will lift off with the Department of Defense’s (DoD) Space Test Program-2 (STP-2) mission as early as 8:30 pm PDT (11:30 pm EDT, 03:30 UTC) on June 24th. Around 2.5 minutes after liftoff, both side boosters will deploy from the center core/upper stage stack, flip around, and burn hard to entirely cancel out their eastbound momentum, picking up speed as they head back to the Florida coast.

After a leisurely 6-minute coast and reentry burn, the booster pair are set to land at SpaceX’s Landing Zones 1 and 2 roughly 8.5 minutes after launch. Pictured below (with the same boosters, no less), B1052 and B1053 will hopefully replicate the simultaneous landings that followed their picture-perfect April 11th launch debut. Despite being the first flight-proven SpaceX boosters to launch as part of a US military mission (STP-2), both boosters will also simultaneously tie SpaceX’s current record for Block 5 booster turnaround (74 days), although the company’s overall record (71 days) still stands.

Meanwhile, STP-2’s fresh Falcon Heavy Block 5 center core – B1057 – will still be soaring above Earth at hypersonic speeds and high altitudes after its side booster companions have successfully come to a rest. Incredibly, the booster’s absolutely critical reentry burn – used to quite literally cushion the blow and minimize reentry heating with the rocket’s engine exhaust – will start at T+8:53 after liftoff. A full 2.5 minutes later (T+11:21), center core B1057 will attempt to land aboard drone ship Of Course I Still Love You, stationed ~1240 km (750 mi) off the coast of Florida.

For reference, Falcon Heavy Flight 2’s Block 5 center core landed aboard OCISLY around T+9:50 after launch, meaning that STP-2’s center core will be in the air – sans any sort of boostback or altitude-raising burn – for a solid 90 extra seconds – 15% longer. To get that extra flight time, B1057 will have to be traveling significantly faster and reach a much higher altitude than its predecessor. In short, B1057 will likely experience the most intense reentry conditions a Falcon booster has ever been subjected to. The current record-holder, B1055, separated from the upper stage and payload 100 km (62 mi) above the Atlantic while traveling nearly ~3 km/s (1.9 mi/s, Mach 8.8).