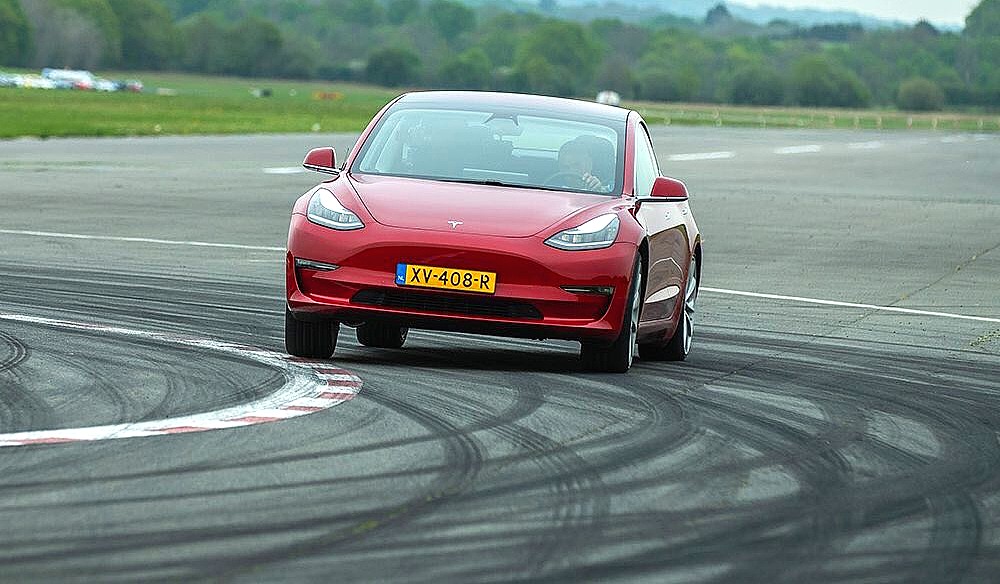 The Tesla Model 3 on the track. (Credit: Chris Harris/Twitter)

There was once a time when UK-based auto show Top Gear practically ignored the existence of Tesla vehicles on the car market. If the popular motoring program’s recent episode is any indication, that time appears to be long gone. The auto show’s host, Chris Harris, has become somewhat of an EV convert during his time with the all-electric sedan.

Off the bat, Harris noted that he would try his best to ignore the hype surrounding the Model 3. He stressed the importance of simply reviewing the vehicle the same way he does other cars. For the most part, he did, discussing only the vehicle’s characteristics such as its suite of fun Easter Eggs, its minimalistic interior, and its exterior looks. The Top Gear host was unimpressed with the Model 3’s design, finding the car to be far too “vanilla” for a vehicle that is being considered as an automobile that can change the face of motoring forever.

But then, the host quips, perhaps that was the point of the Model 3. Tesla made it a point to ensure that its most disruptive vehicle to date does not shock and awe at face value. Being a great car that just so happens to be electric, Harris noted that the Model 3 does appear to have what it takes to convert people away from the veterans of Europe’s hot high-performance sedan market.

And then came the track test.

Gunning the electric sedan into a track, the host could be seen genuinely enjoying the vehicle. The motiring show opted to test the Model 3 against the best high-performance sedans that Europe can offer: the Mercedez-AMG C 63 S, the BMW M3, and the Alfa Romeo Giulia Quadrifoglio. First off was a drag race, an event that the Model 3 would likely dominate.

In order to give the vehicle a bigger challenge, the motoring show opted to hold a half-mile race. As the four-way race started, Harris was surprised when the Model 3 just kept pulling, even beyond the quarter-mile mark. The Mercedes-AMG C 63 S did catch the Model 3 a few feet away from the half-mile mark, but even with this result, the Top Gear host was convinced.

“This is the traffic light king. It’s an AK-47 disguised as a butter knife,” Harris said as he contemplated the results of the half-mile drag race.

Perhaps what really convinced Harris was the results of the Model 3’s handling test, which required the vehicle to go around a hastily-assembled course. The Top Gear host previously drove both the M3 and the Giulia Quadrifoglio on the same course, and the Alfa Romeo ended up winning against the BMW. With this in mind, Harris opted to set the time using the powerful petrol sedan. The Alfa Romeo lived up to its reputation, handling the track in a refined manner, and completing the course in 1:04:84.

The Top Gear host was not a fan of the Model 3’s handling, stating that the vehicle felt soft around the corners. It was unknown if the electric sedan’s Track Mode was activated during the test, but the Tesla nonetheless attacked the course with such ferocity that Harris was nevertheless impressed. While the Model 3 was not as refined around the corners as the Giulia Quadrifoglio, the vehicle’s insane acceleration was nonetheless enough to complete the course in 1:04:28, a full half-second faster than the Alfa Romeo. Considering that the Model 3 seemed to have only 50+% of its battery during the tests, these figures are nonetheless impressive.

The motoring show ended its Tesla segment by concluding that the Model 3 does indeed live up to Elon Musk’s statements. It does beat petrol cars, even around the track. For a show like Top Gear to admit such a thing, is not a bad accomplishment for the Model 3 at all. As for Chris Harris, he recently announced on Twitter that he has decided to buy a Tesla Model 3 for himself.