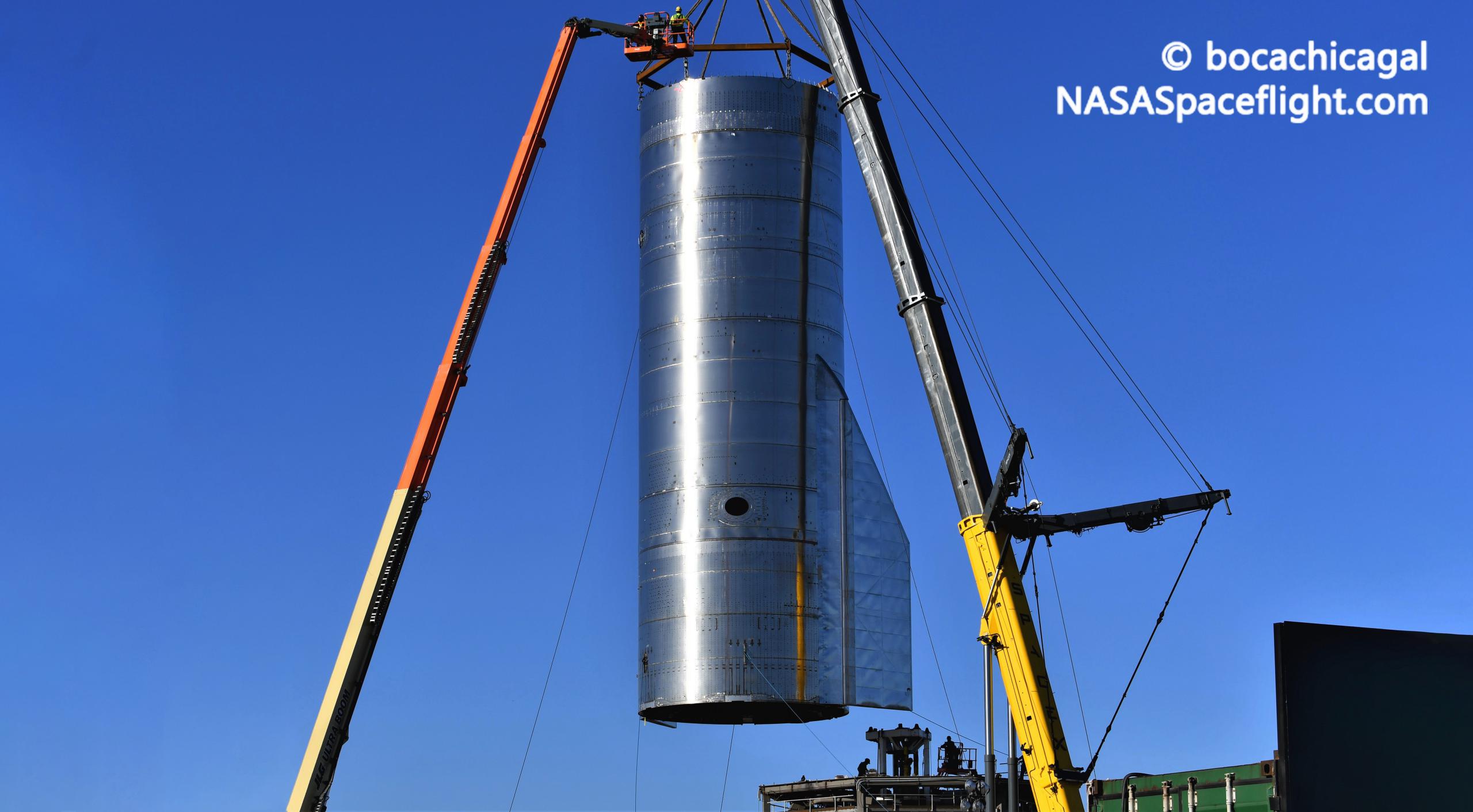 After a several-day delay, SpaceX has successfully installed the first high-altitude Starship prototype at a nearby launch pad. (NASASpaceflight - bocachicagal)

After a four-day delay, SpaceX has successfully installed the first high-altitude Starship at its Boca Chica launch pad not long after the rocket was outfitted with large flaps.

Technically the second time a Starship was outfitted with flaps, Starship serial number 8 had the bottom half of its aerodynamic control surfaces installed on September 23rd – exactly one year after Starship Mk1’s flaps were first installed. Starship Mk1’s flaps were likely meant to be functional but SpaceX never appeared to activate them and Mk1’s main body (tank section) was destroyed during a November 2019 pressure test, failing far before the necessary pressures for flight tests. As such, barring a surprise or two, Starship SN8 will very likely become the first flightworthy prototype to have functional flaps installed.

That remains to be seen, though, and will be put to the test over the next few weeks. If all goes according to plan, the ship could become the first to attempt a high-altitude, 15 km (9.3 mile) launch and landing testing, likely also becoming the first Starship to break the sound barrier.

Starship SN8’s first steps toward testing began on September 26th when SpaceX loaded the rocket onto a self-propelled mobile transporter (SPMT) and rolled it to the company’s dedicated Boca Chica launch and test facilities. Shortly after arrival, a crane and load spreader was attached to the rocket to lift it onto one of the pad’s test stands (Stand A). That lift never came and the crane eventually detached and retracted, kicking off what would become an unusual four-day delay.

It’s believed that the relatively high winds on the Boca Chica coast were to blame, creating conditions that were too hazardous to risk the precise, hands-on work required to lift and manipulate a ~70 metric ton (~150,000 lb) rocket. While undeniably heavy, an empty Starship’s huge surface area effectively turns it into a giant sail, catching and amplifying wind gusts. Attaching a Starship to a launch mount’s hold-down clamps likely demands millimeter precision, making installation and high winds obviously incompatible (or at least inadvisable).

Finally, around midnight on September 30th, winds died down in Boca Chica and SpaceX fired up a waiting crane and lifted Starship SN8 onto the launch mount. Soon after, technicians began the process of installing the mount’s temporary hydraulic ram – used to mechanically simulate engine thrust – to the rocket’s ‘thrust puck’.

Like every Starship prototype since Mk1, Starship SN8’s first major challenge will involve passing an acceptance test known as a “cryogenic proof.” After being pressurized with ambient-temperature nitrogen gas to check for leaks, SN8 will be fully filled with liquid nitrogen while the hydraulic ram subjects its thrust puck and engine section to stresses similar to the thrust of three Raptor engines. Together, three Raptors are capable of producing more than 600 metric tons (1.3 million lbf) of thrust. For reference, four Raptors would effectively match the thrust of an entire Falcon 9 booster with all nine Merlin 1Ds at full throttle.

If SN8 reaches the necessary pressure and survives the stress of its cryo proof(s), it will likely become the first Starship to attempt a triple-Raptor static fire – a first for the engine, too. Starship SN8’s first cryo proof attempt is scheduled no earlier than 9pm-6am CDT (UTC-5) on Sunday, October 4th with backup windows on the 5th and 6th. The first static fire attempt – possibly beginning with one Raptor or jumping straight to three – could happen several days after a successful cryo proof.

According to Elon Musk, SpaceX will static fire SN8 twice before attempting its 15 km (~50,000 ft) launch debut. More likely than not, SpaceX will attempt a triple-engine static fire with the Starship as-is, install SN8’s nosecone and forward flaps, and attempt a second static fire while only drawing propellant from tbe rocket’s smaller header tanks (one of which is located in the tip of its nose). Only time (or Elon tweets) will tell.