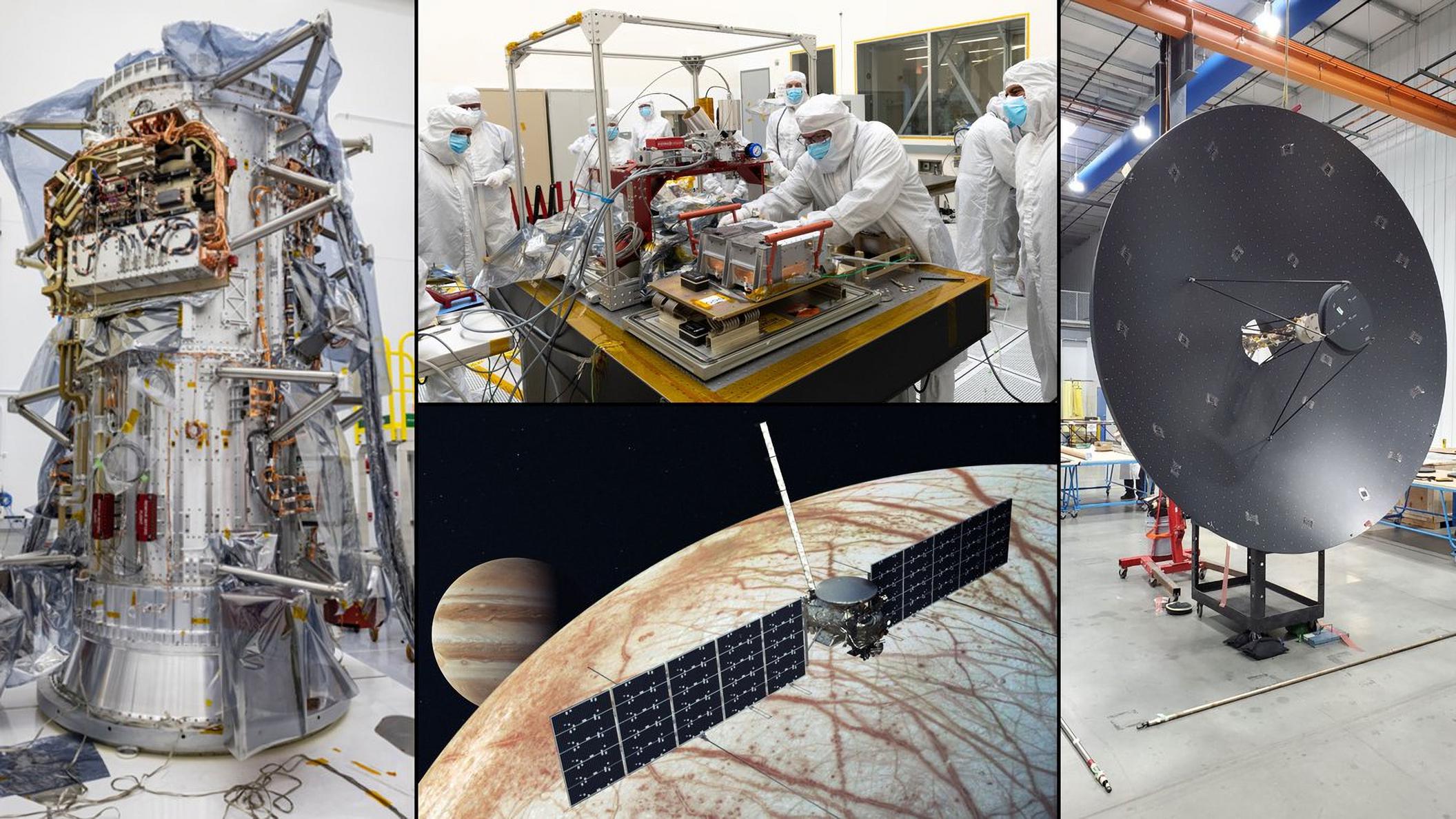 An array of Europa Clipper hardware is currently in work as JPL kicks off spacecraft assembly. (NASA/JPL)

NASA says that the assembly of Europa Clipper has begun at NASA’s Jet Propulsion Laboratory (JPL), in Southern California.

Europa Clipper is an interplanetary spacecraft developed by NASA to observe Europa, a large moon of Jupiter, over the course of a series of flybys while orbiting the gas giant. The Clipper’s primary goal is to determine whether Europa hosts conditions suitable for life in an immense liquid water ocean that lies under its icy surface. NASA has selected SpaceX to launch the ~$4.25 billion spacecraft to Jupiter in 2024 on its Falcon Heavy rocket – a contract SpaceX effectively beat out NASA’s own Space Launch System (SLS) rocket to win.

The engineering components and science instruments that make up the spacecraft’s flight hardware began development in 2016 and are expected to be completed by the end of 2022. These components come from across the United States and Europe and will be assembled at JPL. The main body of the spacecraft is a 10-foot-tall (3-meter-tall) cylindrical propulsion module. Fitted with electronics, radios, cables, and the spacecraft’s propulsion systems, it will ship to JPL this spring. Europa Clipper’s 10-foot-wide (3-meter-wide) high-gain antenna is expected to follow not long after.

The first instrument to arrive at JPL was the Europa-UVS, an ultraviolet spectrograph that was assembled in San Antonio, Texas. Europa-UVS will search above the surface of Europa for signs of plumes. The instrument collects ultraviolet light, then separates the wavelengths of that light to help determine the composition of the moon’s surface and gases in the atmosphere.

As components of the spacecraft arrive, they will be integrated together and re-tested. Engineers need to be sure the instruments can communicate with the flight computer, spacecraft software, and power subsystems.

“Once all the components have been integrated to form the large flight system, Europa Clipper will move to JPL’s enormous thermal vacuum chamber for testing that simulates the harsh environment of deep space. There also will be intense vibration testing to ensure Europa Clipper can withstand the jostling of launch. Then it’s off to Cape Canaveral, Florida, for an October 2024 launch.”

According to NASA, “when it’s fully assembled, Europa Clipper will be as large as an SUV [and have] solar arrays long enough to span a basketball court – all the better to help power the spacecraft during its journey to Jupiter’s icy moon Europa.”

Previous imagery has already provided scientists with certainty that Europa’s surface is made up of mostly water ice. Additionally, other data about the moon’s physical characteristics have engendered great confidence that beneath or within some of that 15-mile-thick ice lies pockets of liquid water that could go thousands of years between re-freezing events. Those water pockets could potentially be habitable and even contain microbial life that Europa Clipper could detect.

Some scientists like Monica Grady, Chancellor at Liverpool Hope University, believe it is almost certain that Europa is harboring life. “When it comes to the prospects of life beyond Earth, it’s almost a racing certainty that there’s life beneath the ice on Europa,” stated Grady in 2020.

NASA says that “Europa Clipper will orbit Jupiter and conduct multiple close flybys of Europa to gather data on the moon’s atmosphere, surface, and interior. Its sophisticated payload will investigate everything from the depth and salinity of the ocean to the thickness of the ice crust to the characteristics of potential plumes that may be venting subsurface water into space.”

Europa Clipper will be carried into space aboard a SpaceX Falcon Heavy rocket, the most powerful operational rocket today. The ~$178 million launch contract was announced on July 23rd, 2021. Following a tentative Q4 2024 launch into heliocentric (sun-orbiting) space, Europa Clipper will spend around three years in deep space, performing gravity-assist maneuvers at Earth and Mars to eventually boost itself to Jupiter for a 2028 arrival.